Puebloan Vessels at the University of Iowa 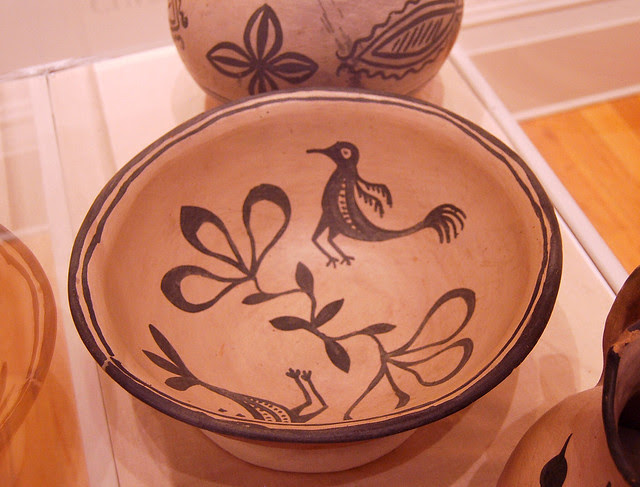 Simple. Elegant. Useful. This pottery exhibit closed a month ago. What you missed was an excellent collection of native pottery from the American Southwest. The pieces were on display at Old Capitol in Iowa City, Iowa. Curated by UI anthropology professor Margaret Beck, the exhibit focused on how communities used different types of vessels in everyday life. The featured pottery is from the ethnographic collections of the University of Iowa Museum of Natural History and Museum of Art.
Posted by 42N at 10:41 PM No comments: Across the street from Depot Bottom Country Store in McMinnville, Tennessee are a collection of retired and working trains. While the 42N team didn't spend enough time there last October, the site was dripping with sights to see and history to explore. 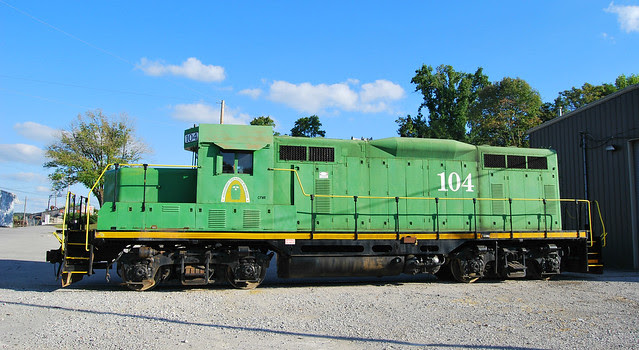 I have no idea whether this is a working locomotive. Seem like it is still in working order and ready to haul the area's timber and nursery products to wherever needed. I was told that this particular area of town known as Depot Bottom is quite old and once settled, the site always was rail related. 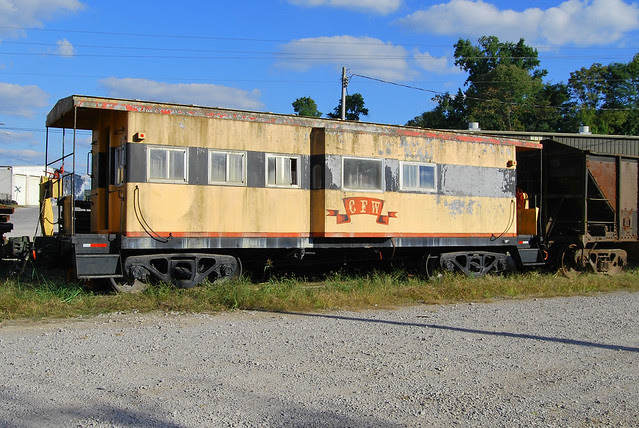 A few feet from the green locomotive is this old caboose. Now I know that cabooses are no longer in service and therefore figure this one is retired. I have not researched the CRW (Caney Fork & Western) logo to figure out the history of the line or this particular caboose, but may do so before the next visit.
Posted by 42N at 1:55 AM 1 comment:

Animated GIF featuring the Fab Four. All rights belong to their respective owners.
Posted by 42N at 6:35 PM No comments: 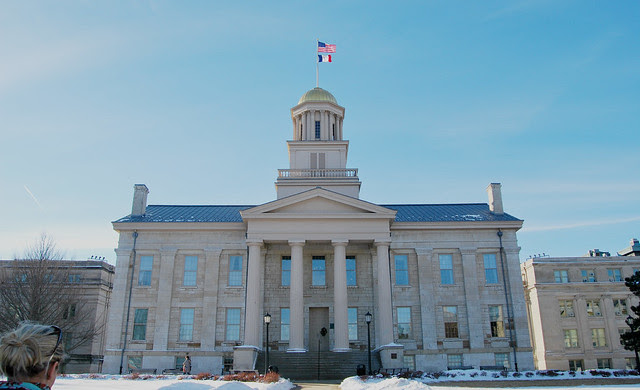 The centerpiece of the University of Iowa's campus is Old Capitol. It serves as the icon of the university. The building dates from the mid-1800s and was a territorial capitol of Iowa before that function moved to Des Moines. This is what the building looks like today. When it was being renovated in 2001 the cupola caught fire from a worker's paint remover torch. The structure from the roof line to the top of the dome was destroyed - including the bell. Inside the Old Capitol Museum (located in the building's basement) you can view the melted bell and read an account of the replacement. 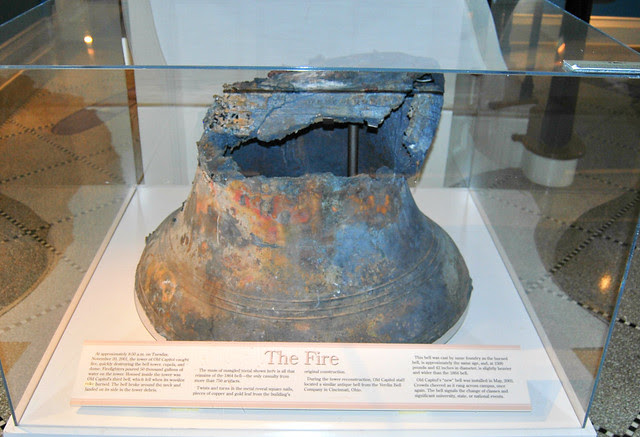 The story of the melted bell reads as such: "At approximately 8:50 AM on Tuesday, November 20, 2001, the tower of Old Capitol caught fire, quickly destroying the bell tower and dome. Firefighters poured 50 thousand gallons of water on the tower. Housed inside the tower was Old Capitol's third bell, which fell when its wooden yoke burned. The bell broke around the neck and landed on its side in the tower debris.

The mass of mangled metal shown here is all that remains of the 1864 bell - the only casualty from more than 750 artifacts. Twist and turns in the metal reveals square nails, pieces of copper and gold leaf from the building's original construction.

During the tower reconstruction, Old Capitol staff located a similar antique bell from the Verdin Bell Company in Cincinnati, Ohio.

This bell was cast by the same foundry as the burned bell, is approximately the same age, and, at 1500 pounds and 42 inches in diameter, is slightly wider and heavier than the 1864 bell.

Old Capitol's "new" bell was installed in May, 2003. Crowds cheered as it rang across campus, once again. The bell signals the change of classes and significant university, state, or national events."
Posted by 42N at 1:55 AM No comments: 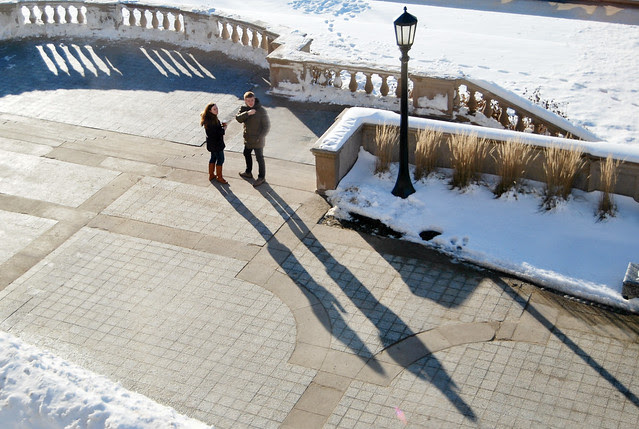 Old Capitol in Iowa City is the iconic landmark of the University of Iowa. Inside the first territorial capitol of Iowa are dramatic views of the campus and city. On this day the clear weather and late afternoon lighting afforded long shadows across the university's central campus. Out the second floor windows to the west was a sight of a couple in conversation, unaware that their shadow cast a length of nearly three times their actual size. 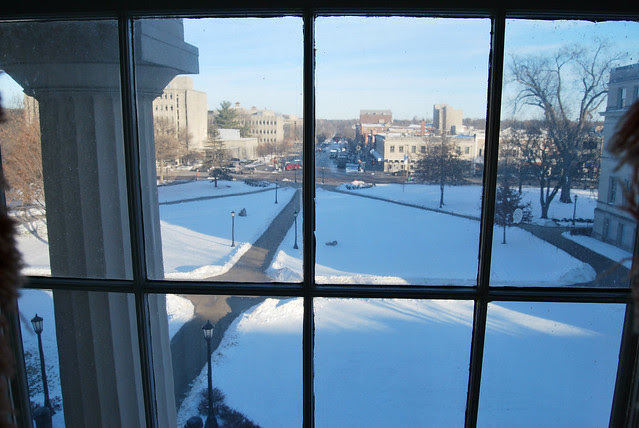 On the opposite side of the second story was this scene of the campus open area and the intersection of Clinton Street and Iowa Avenue. It's wintertime in Iowa. It's cold. And unless you can see the sun it is best to find somewhere where the temperature is warm. Only 55 days until spring!
Posted by 42N at 8:29 PM No comments:

A Century of Handling 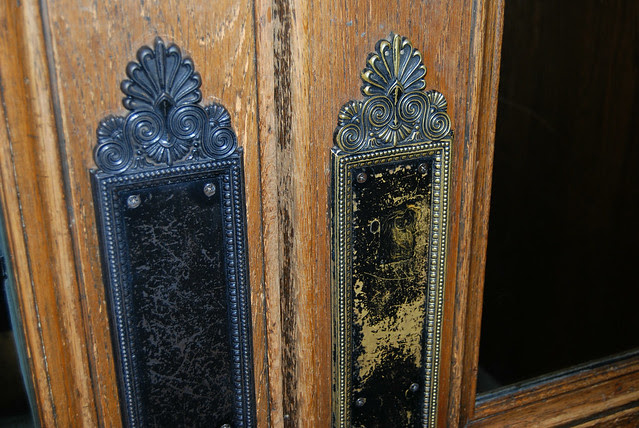 These are the hand panels on the sturdy oak doors of MacBride Hall on the University of Iowa campus. The building was constructed during the first decade of the 1900s. If these panels are original to the doors just imagine how many people have touched them - its on a generational scale.
Posted by 42N at 1:55 AM No comments:

Mooses in a Glass Box 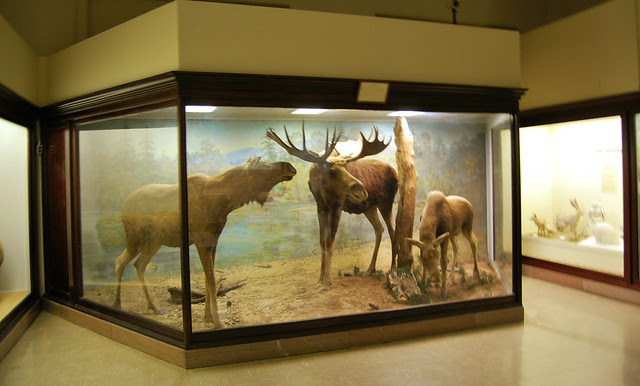 Every year there seems to be a sighting of a black bear or moose wondering around eastern Iowa. Iowa's DNR says the large animals are most likely from Minnesota, where they have treked along river, timber and corn fields in search of who knows what down here along the 42N latitude. While the latest sighting of a lone male moose was within the city limits of Cedar Rapids last month, the whereabouts of the northern creature is unknown. Here at the University of Iowa's Natural History Museum, Mammal Hall you can find a whole family of mooses. The display has been here for many years - and so have I.
Posted by 42N at 1:55 AM No comments: 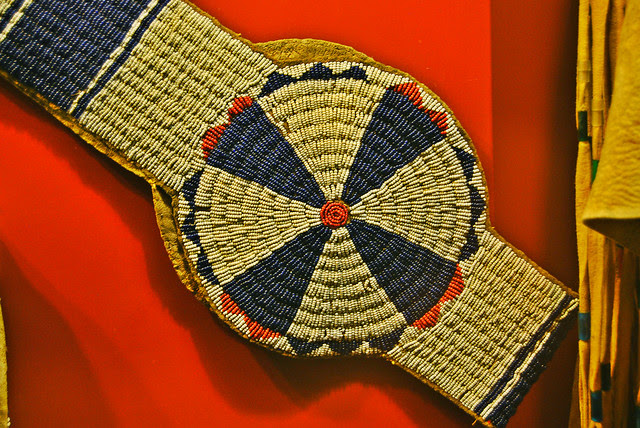 American native bead work, specifically Iowan is rare, detailed and a work of art. Check it out for yourself at the Iowa Natural History Museum at Macbride Hall in Iowa City, Iowa. Imagine how these are made. How do the makers get the beads? How is the pattern crafted? How long does it take to make this? Maybe someone knows.
Posted by 42N at 1:55 AM No comments:

A Muscatine Look from Iowa to Illinois 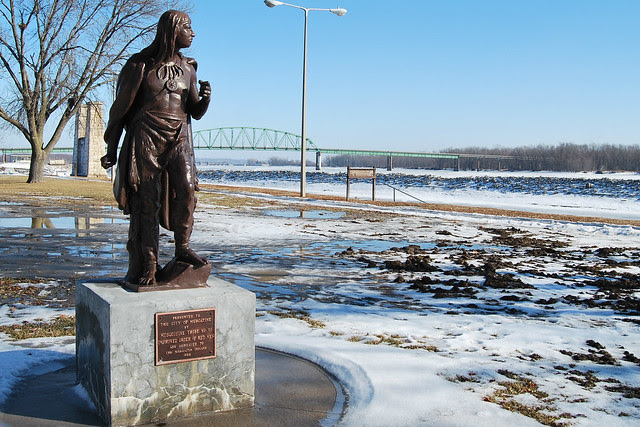 A statue looks across the Mississippi River from Muscatine, Iowa to Illinois.What really makes this scene a head scratcher is the spelling of Muscatine as found on the plaque.

It reads,"Presented to the City of Muscatine by Musquitine Tribe No. 95, Improved Order of Red Men, and dedicated to the Moscoutin Indians 1926." Take your pick of the city's spelling. My guess is that its probably a progression from Native to French to English.
Posted by 42N at 1:55 AM No comments: 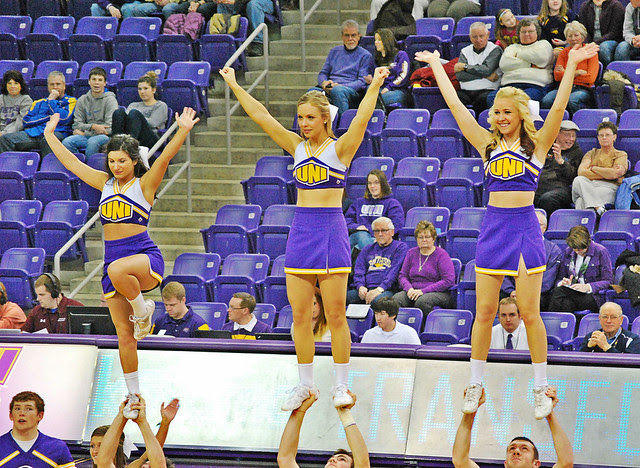 Make no mistake, these cheerleaders are athletes. You have to possess strength to lift, jump and tumble, plus be able to smile in both winning or losing situations. This squad is part of the University of Northern Iowa team who performed during time-outs and halftime at the women's basketball game last Sunday. The UNI panthers won 87 to 53 over Southern Illinois. The crowd showed appreciation for the squad especially for their court-length run of backflips.
Posted by 42N at 1:55 AM No comments:

Shine a Little Light on Me 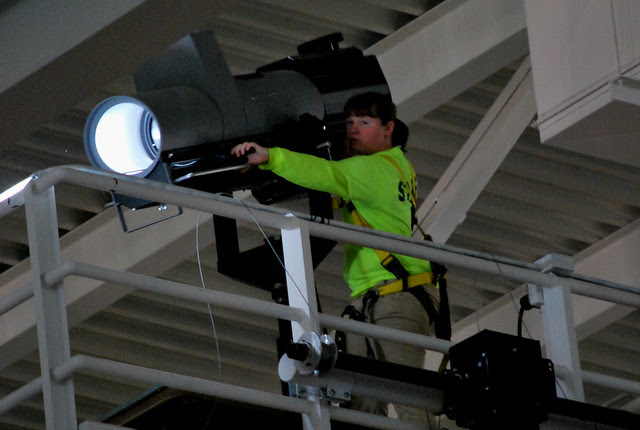 What's a college basketball game without some dramatic lighting? Boring. But add some lights with automatic controls and others run by humans, the resultant effects can be spectacular. On Sunday this spot operator did her best to zap people's retinas and provide a winter tan to the pale citizens of the north. That was a welcomed relief after the polar vortex of this past week week reminded us what -23F felt like for hours at a time.
Posted by 42N at 1:55 AM No comments:

Frozen Button on the Mississippi River 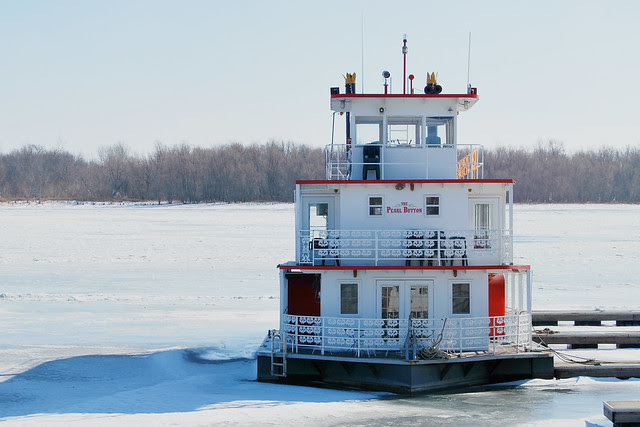 Muscatine, Iowa's The Pearl Button excursion boat remains solidly ice locked in the downtown harbor along the Mississippi River. This past week local temperatures plummeted well below zero due to the arrival of the polar vortex. But three days later the temps warmed a bit and made some progress in local melting. However except for some water atop ice near shore, the ice looked pretty thick and extended from Ioway to Illinois. The 42N crew did spot several bald eagles along the way especially along the Cedar, Iowa and Mississippi rivers.
Posted by 42N at 9:01 PM No comments:

Winter's Dam on the Maquoketa 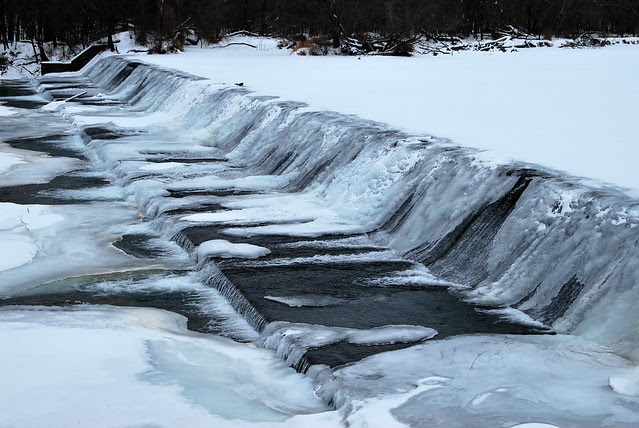 To begin the 42N 2014 blogging season I traveled a few miles up the highway to the old dam on the Maquoketa River located at Monticello, Iowa. Last year's blog activity saw a ready stream of posts until a self imposed slowdown in November. While I broke my one-more-blog-posting-than-the previous-year routine, the pause did rack up more material that I can blog about this year. So let's get started...

For more than 100 years this structure and its predecessors have provided grist milling,ice and electrical power for the city. Today the area is noted as historical and for its fishing magic just below the cascades. 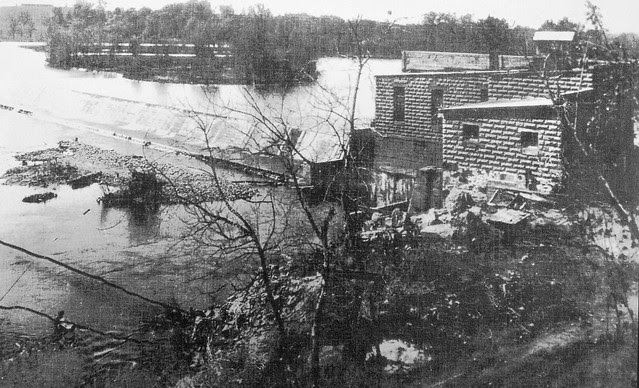 A historical view of the dam taken in the 1920s shows various units of the power plant configuration during its peak production period. The stone ice house building, closest to the photographer, was for storage of river ice used in households in the community.
Posted by 42N at 4:46 PM No comments: