Canadian National Railway At Home in the Snow 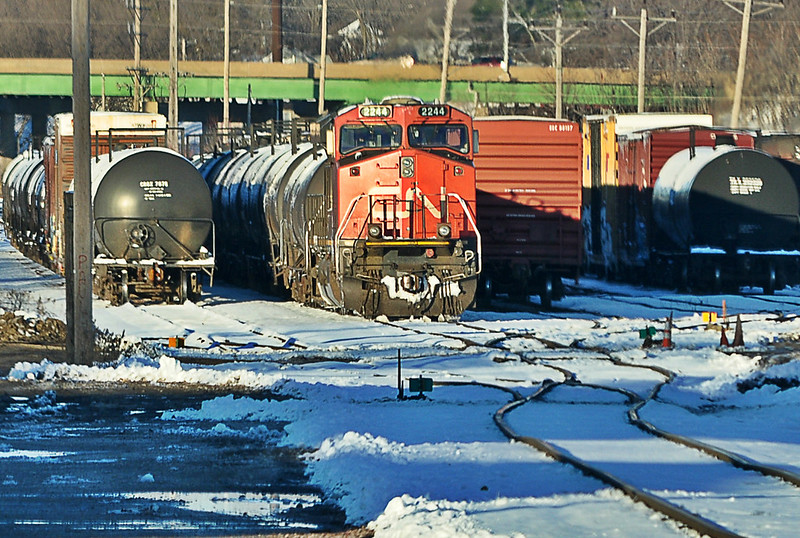 Last weekend's snow storm brought 7.5 inches locally. Three days later the snow melted away. Canadian National CN Railway services part of this community by hauling ethanol and grain plus much more I suspect. On this day the locomotive pointed to the west, aiding in warming off some of the frozen precipitation.
Posted by 42N at 6:56 PM No comments: 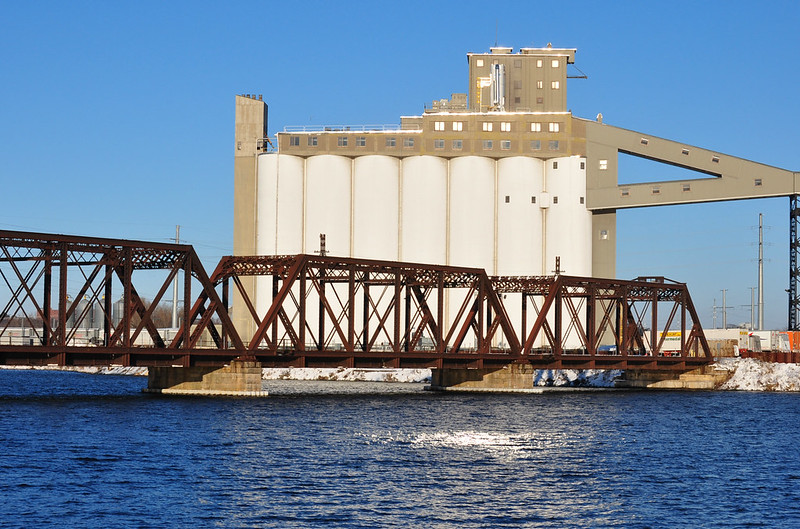 These two photos could be joined to show the expansiveness of the Pepsico Quaker Oats plant/mill here in Cedar Rapids, Iowa. The century old plant receives oats and corn from the surrounding agricultural lands and then performs cereal magic. 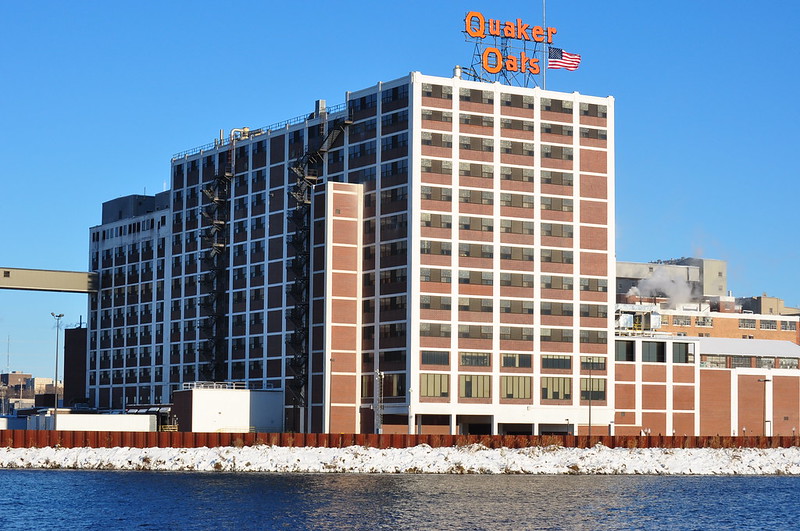 Somewhere in that complex the site produces kid (and adult) favorite Cap'n Crunch cereal. When the wind is just right and the ingredients are just so, you can smell Crunch Berries being made. Its been that way for years.

The advantage point of this photo is across from the Cedar River. In 2008 the river rose to historic levels and damaged the plant. As the city discussed how to solve long term flooding issues the plant workers installed a metal barrier along the east shore of the river to help in future flood prevention. The wall has not been hard tested since 2008. Good to know that the Cap'n won't let his plant stop production come rain or high water.
Posted by 42N at 7:48 PM 1 comment:

Snow from Canada, Oh the Irony! 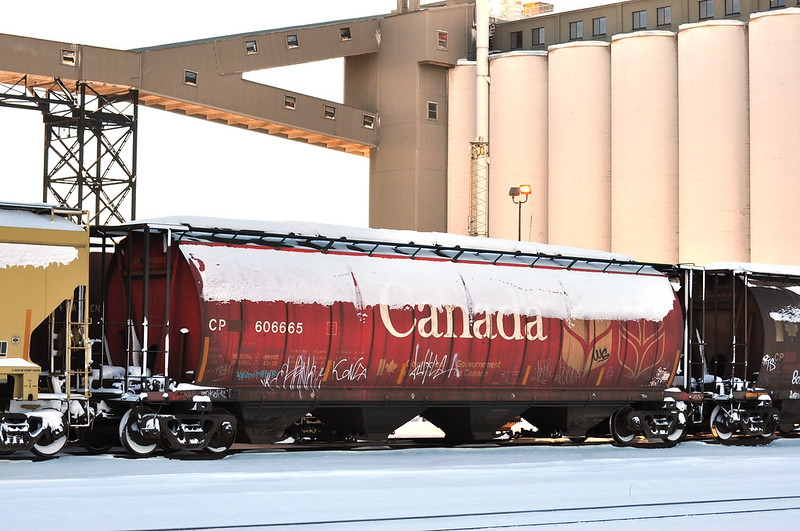 So I'm out looking for snow scenes to photograph since we received the first of the season white stuff last night and this morning. Locally 7.5 inches of wet snow blanketed everything. At the Quaker Oats mills here in Cedar Rapids, four hopper grain cars from the Canadian Pacific Railway were not spared from the frozen precipitation. Its the white cap of snow over word "Canada" that caught my attention. Snow from the Great White North is something generally expected, now it is confirmed! Good one eh?
Posted by 42N at 7:48 PM No comments:

On November 15th the temperatures along the Iowa - Wisconsin border were near 60F. Tugs and barges took advantage of the weather to move northward on the Mississippi River towards Prairie du Chien, Wisconsin (upper left.) 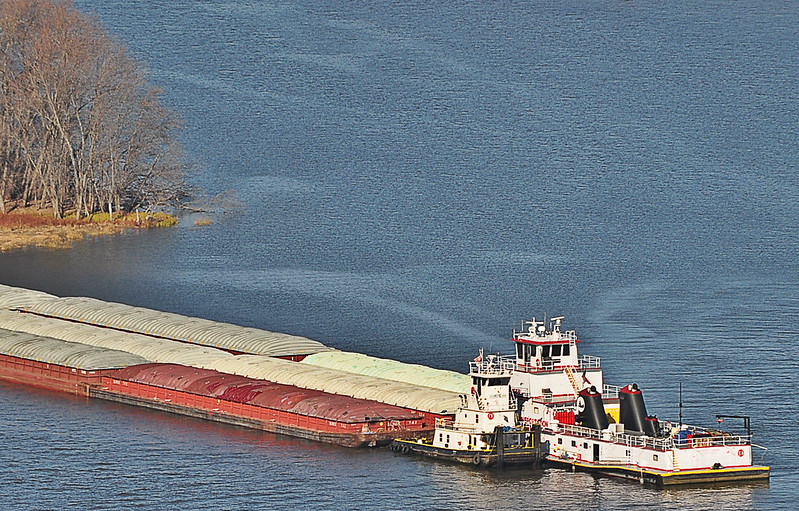 A small tug pulled along side of the David L Griggs tug. Both vessels belong to the Marquette Transportation Company which operate from Paducah, Kentucky on the Ohio River. David L Grigg's present location can be seen at this link. 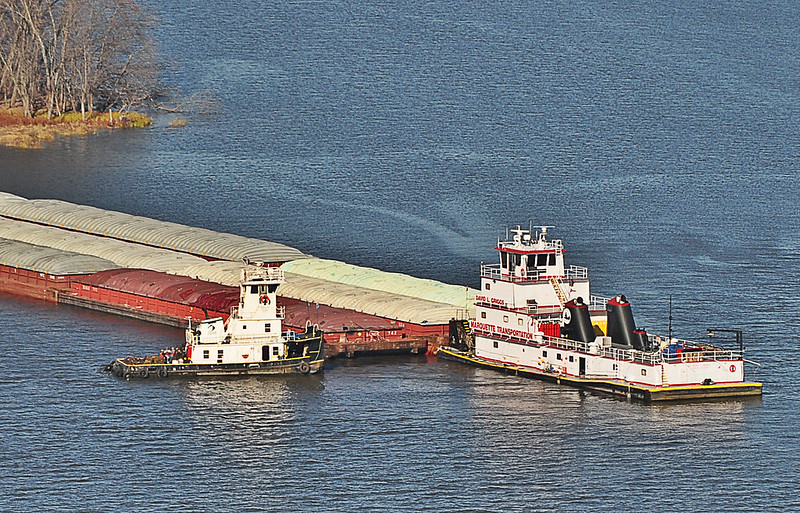 The smaller tug detached from the Griggs, rotated and helped to push a formation of barges just outside of the frame.

Another tug was busy assembling the formation just north of the smaller tug and the DLG. This island, which is visible from Iowa's Pike Peak State Park is probably a staging area for barges as there is evidence of tie offs and signs.
Posted by 42N at 10:43 PM No comments:

Color on the Muddy Mississippi River 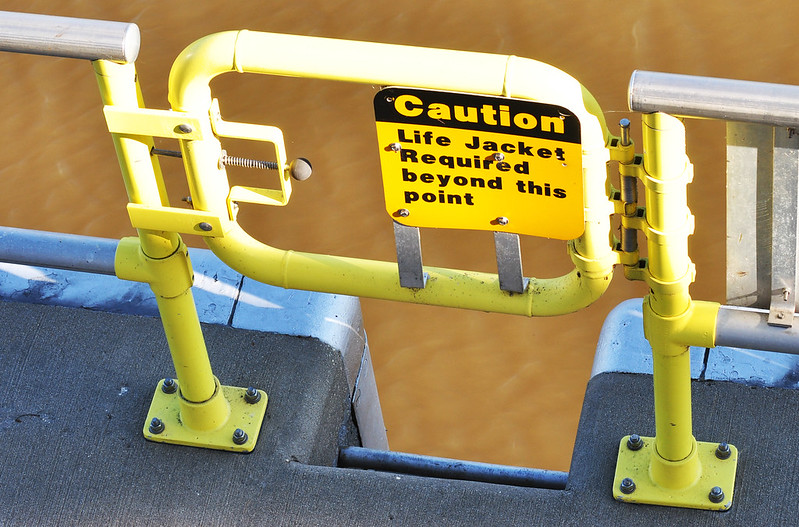 The color of the Mississippi River at Guttenberg, Iowa is brown, organic brown, the color of coffee and crème. At Lock and Dam number 10 a ladder connects the lock portion to the top of the structure for maintenance or emergency situations. At this time of year the brown water could have been white or contain chunks of clear ice. No so on this 60 degree plus day.
Posted by 42N at 2:00 AM No comments: 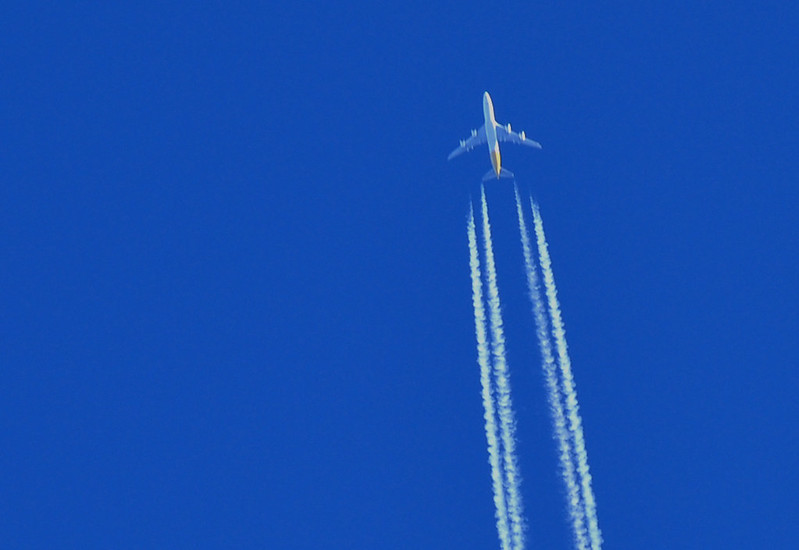 Yesterday while taking advantage of 60 degree plus weather in mid-November I was in Wisconsin to see the sights. With crystal blue skies around I looked up and saw this wide body climbing in the sky. It passed directly overhead as it aimed to the northwest - maybe toward Minneapolis or Seattle or points west. Anybody know the airline and airframe model?
Posted by 42N at 10:26 PM 2 comments: 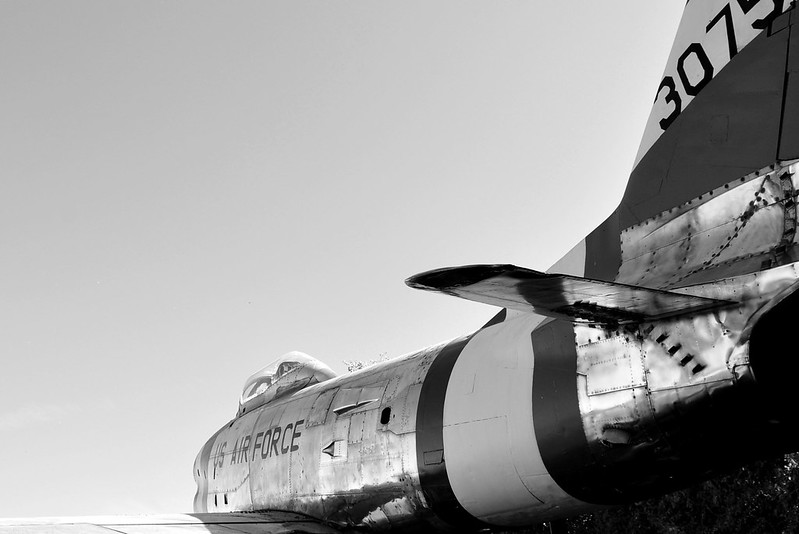 A communication regarding my last post concerns the history of the Iowa City Municipal Airport's F-86 Sabre jet memorial. Websites dedicated to identifying certain aircraft exist and are fueled by input from photographers, historians and local contributors.

One 42N blog reader provided a link to such a site where he and others have detailed information about this Korean War era airframe and its history in Iowa.

Additional history regarding this particular F-86 is welcomed. Please visit the website below and add your knowledge of this memorial to the veterans of Johnson County, Iowa. 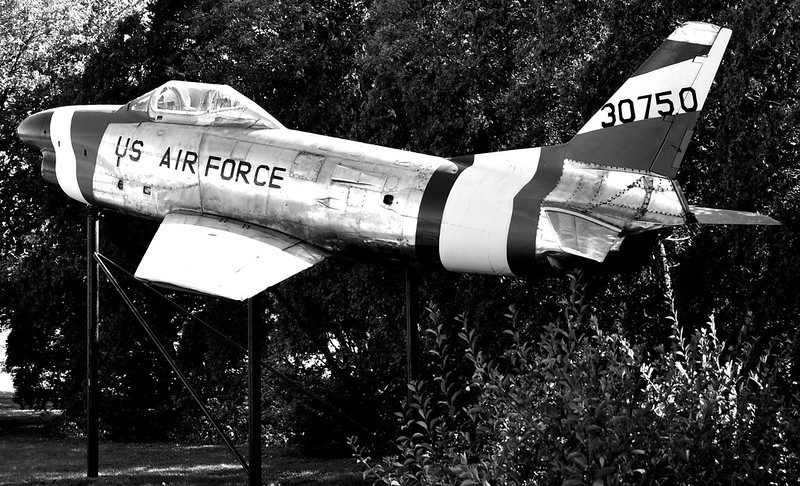 Outside the entrance to the Municipal Airport in Iowa City, Iowa is this F-86 Sabre jet fighter. I took a few photos of it the day I got my first Nikon DSLR camera. Now with a newer Nikon camera and five years later its time to return to the venerable monument to examine what it is telling us. 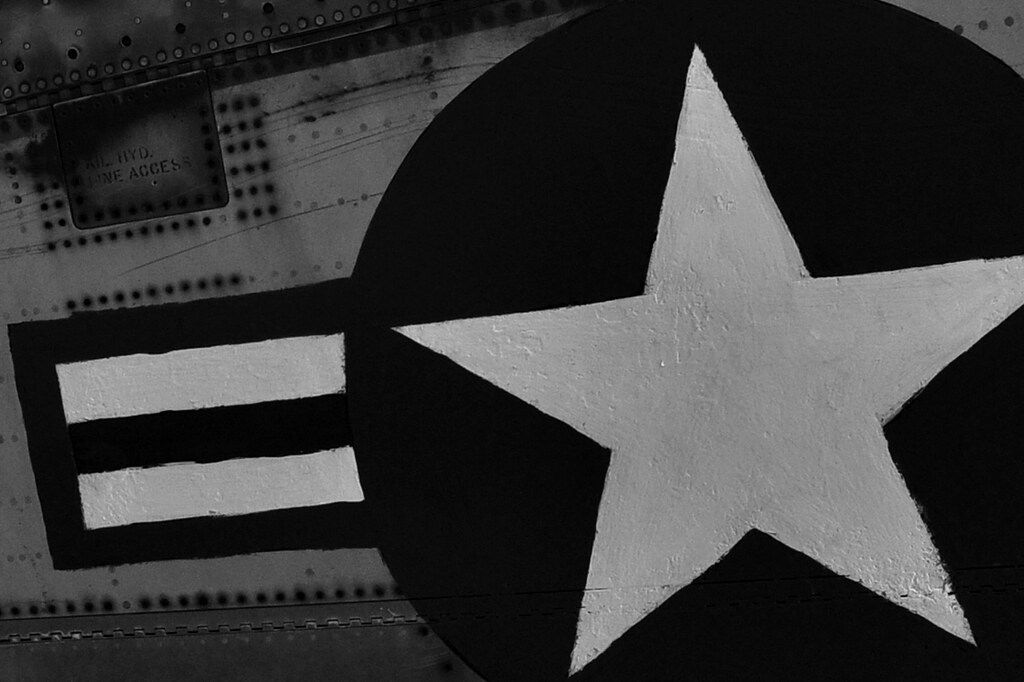 This summer a painter gave a new coat of red white, blue and black to various areas of the airframe. 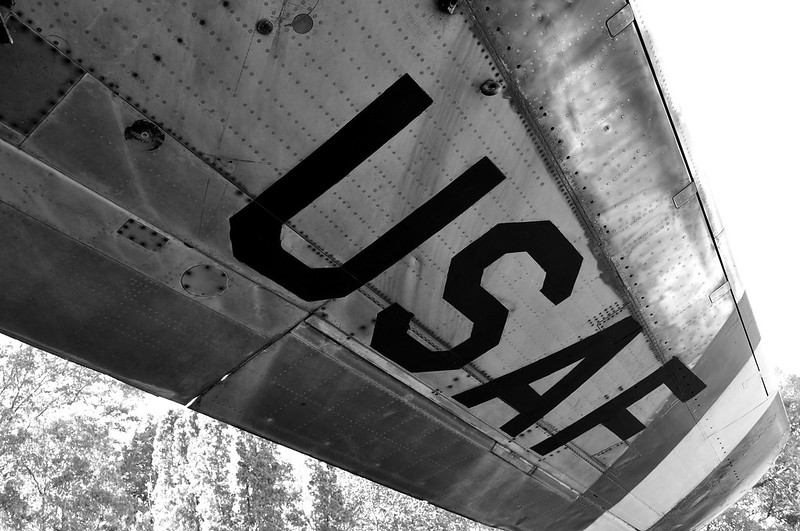 While not many people take the time to inspect the underbelly of the fighter it was important to check that the plane's integrity is being maintained. 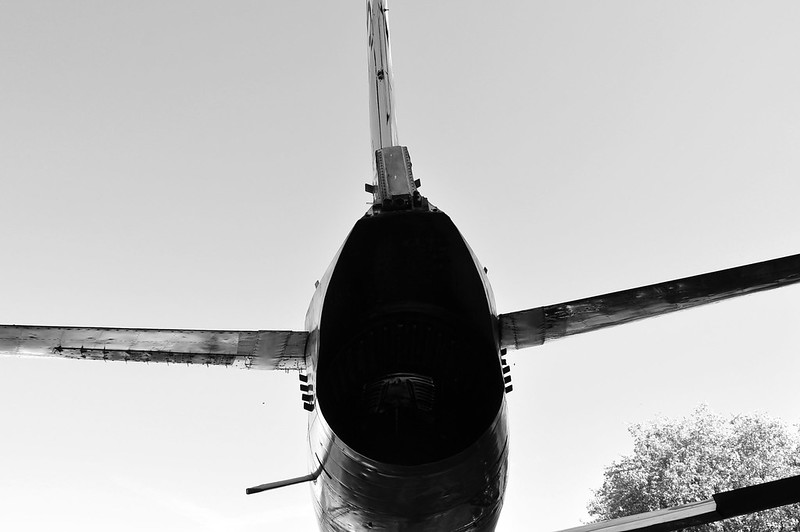 The business end of a once powerful jet. Sabres vs. MiGs over North Korea back in the 1950s defined modern jet aerial combat. 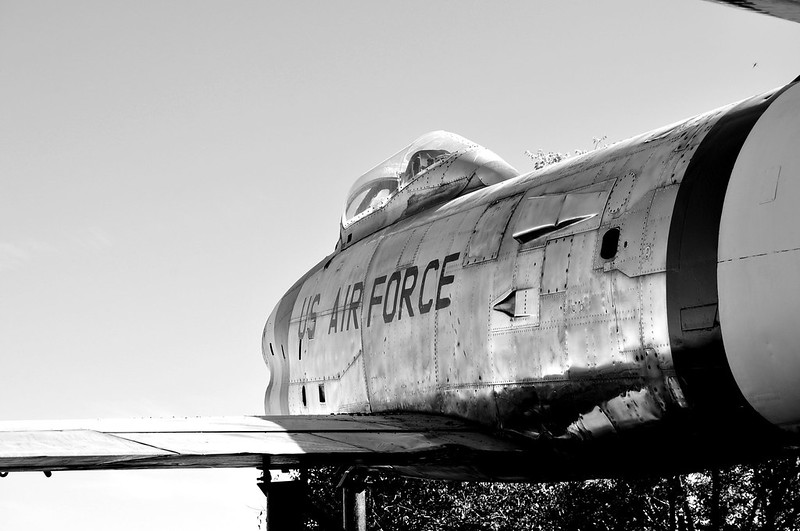 A plaque on a small granite boulder below the plane reads,
This F-86 Sabre Jet
Re-dedicated by Johnson County Veterans
July 4, 1980
To the Memory of
American Veterans of all Wars
Who Have For More Than 200 Years Served
And Sacrificed in the Cause of Freedom
"They Shall Not Be Forgotten."
Posted by 42N at 12:00 AM 1 comment: 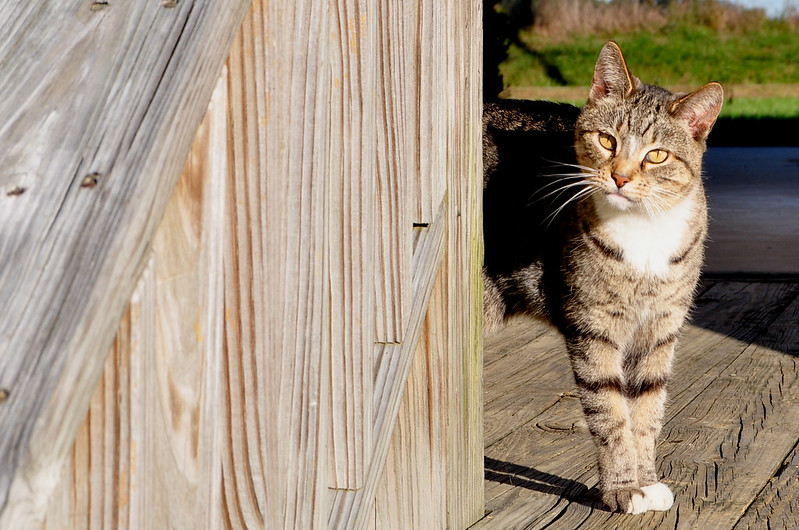 Ever visit a cat? This one is quite friendly and loves to be near people. She has the run of the ranch and is both an indoor and outdoor resident of the house. In mid-October, "Kitty" yes that's her name, liked to stretch on the deck in the afternoon sun. 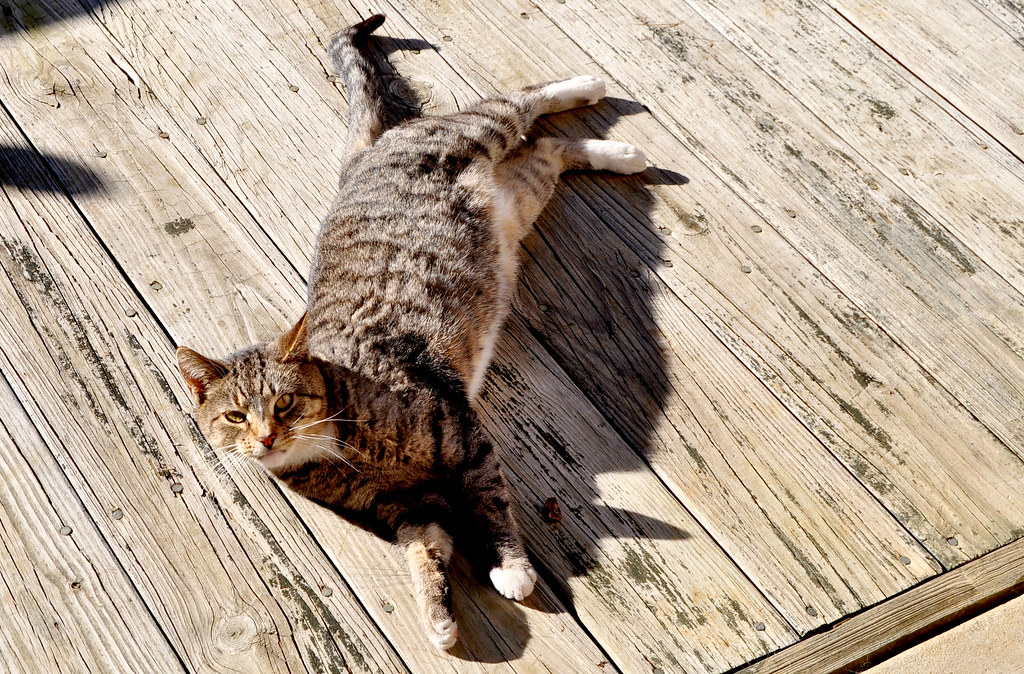 Playing around with low sun angles, shadows and textures is what this photo is all about. 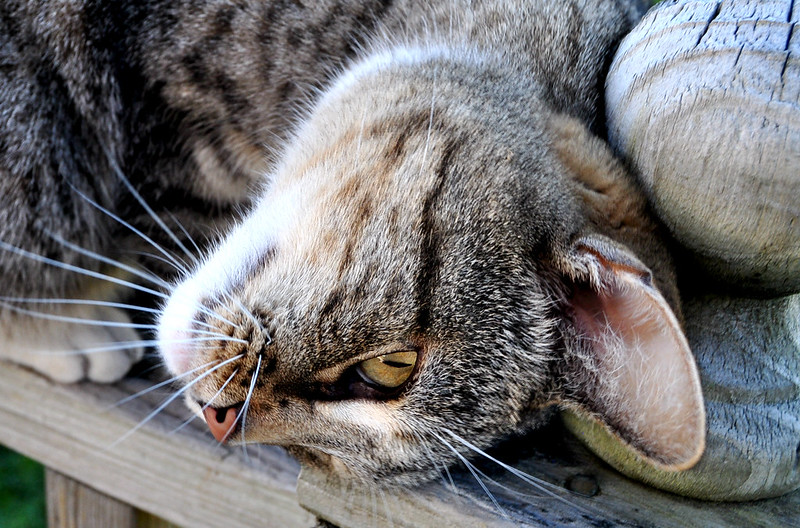 On my last day of visiting, Kitty showed me what serves as back scratchers when humans are not around to do the job.

In Between the Clouds 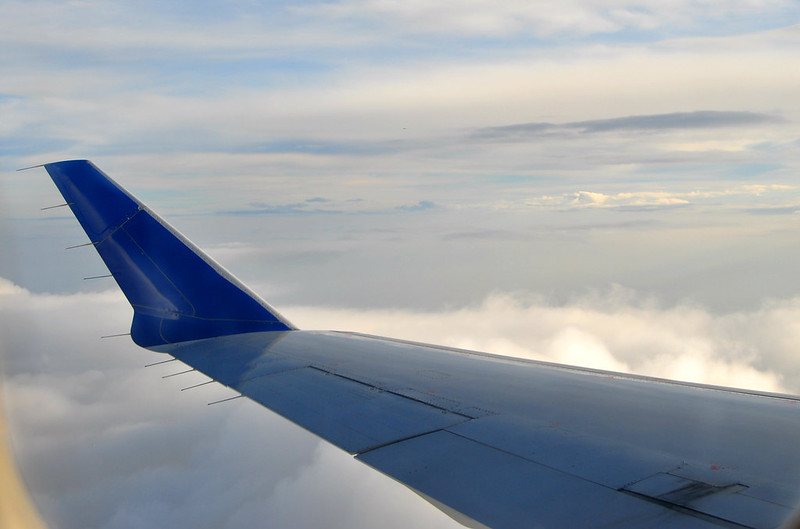 Its been a while since I've flown. Three years in fact. This time the journey was from Chicago (ORD) to Cedar Rapids (CID) on the last leg of a journey from Nashville (cats.) The pilot reported it would be a race between weather moving in to CID and his ability to land safely. 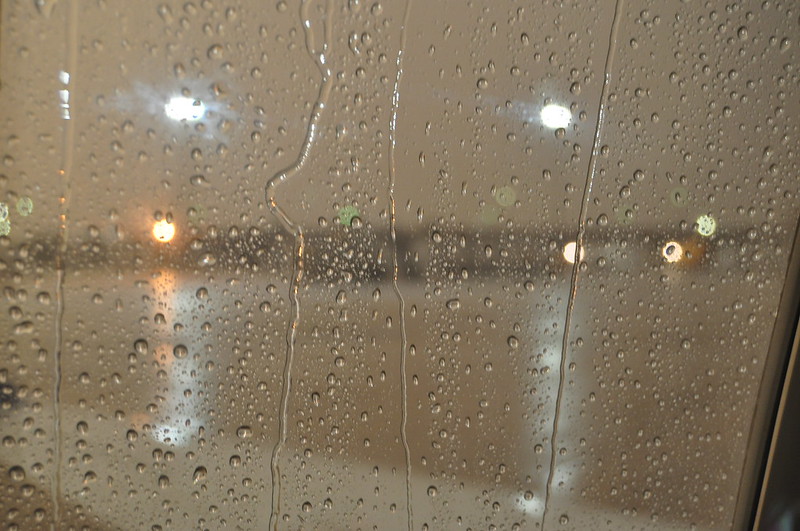 Wheels were down on final approach about a quarter mile from the runway when the captain pulled up and went around. A wall of water hit the plane with lightning all around. After a 10 minute arc around the airport the pilot said he would come in from the opposite direction. A few looks outside and it was easy to see what was happening. Developing rain systems were popping up along with the wind and light show. We did make it down just as the one of the waves hit. Our plane taxied near the ramp and shut down. For the next 90 minutes we sat on the tarmac as storm waves came through. Apparently there are actual FAA regulations about ramp crews servicing planes when lightning is around. Think about it - metal planes and jet fuel - not really safe if you are working the ramp and baggage collection in those conditions.
Posted by 42N at 11:06 AM No comments: