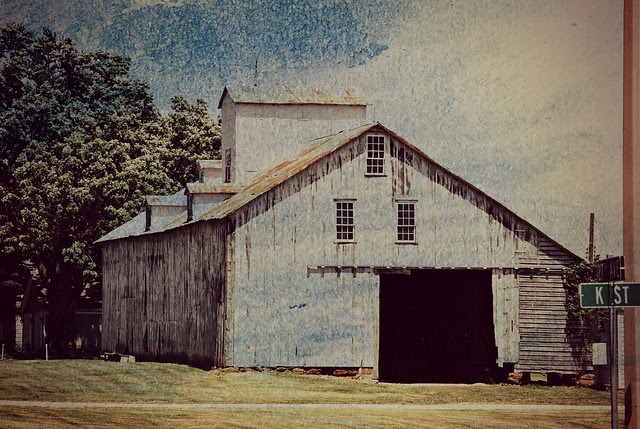 The Amana Colonies in eastern Iowa are home to many old time barns, stone buildings and churches. When the seven villages entered the 20th century the line between rural and town boundaries blended. This barn is located in Middle Amana not far (just a few blocks) from the former Amana Manufacturing plant which is now owned by Whirlpool.

I photographed the structure this past Sunday during a harsh mid-afternoon sun. Thanks to online photo editing the image comes alive with more visual character. As for the use of this barn back in the day - I'm going to rely on the barn experts to tell me. I think this is a horse barn because of the wide door but maybe it is something else. You tell me. 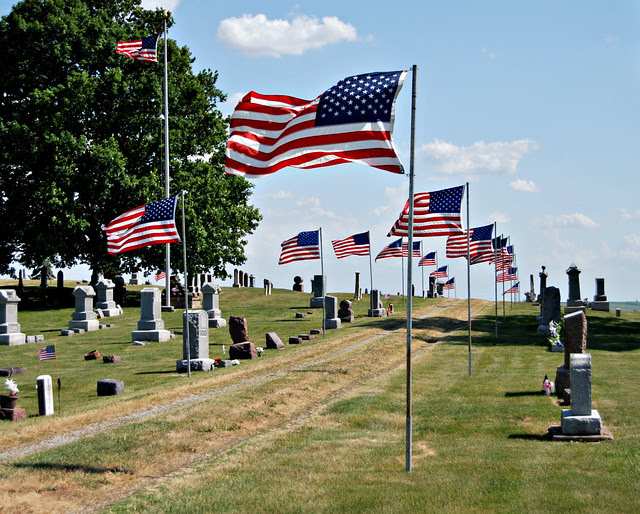 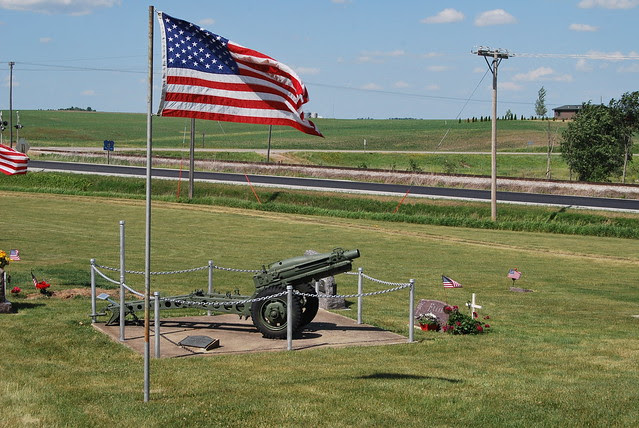 Mount Auburn, Iowa is a small farming community situated close to the Cedar River in northern Benton county. Monday's stiff westerlies made for iconic flag flying on Memorial Day. Situated among the veterans buried at this rural cemetery are two military displays. One memorial is a stack of bowling ball size cannon balls located at the base of the tall flagpole. The other display is a more modern howitzer artillery piece. Both displays inspire us today to remember veterans and their sacrifice. 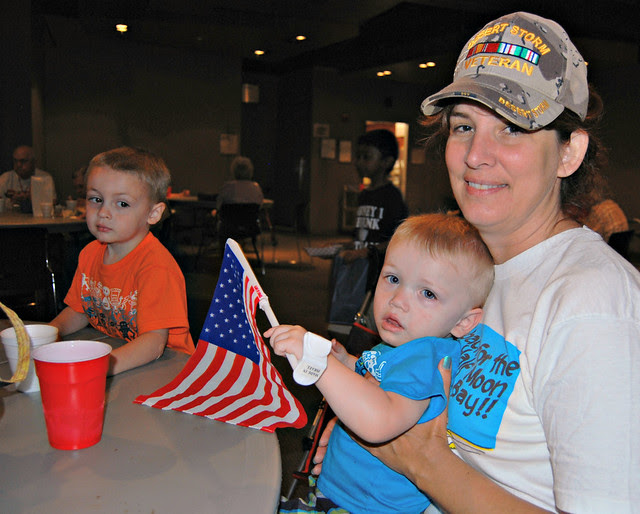 Memorial Day 2012 consisted of tributes to those who gave their lives for freedom. Parades, speeches and cemetery visits are typical ways to participate in the national annual remembrance. On this day the 42N team trekked to Waterloo, Iowa's Sullivan Brothers Iowa Veterans Museum. Among the visitors to the four year old museum of military artifacts and recorded stories was a Desert Storm/Shield vet.

She served in the US Army during Gulf War I helping to stage supplies along combat zones. The museum offers an opportunity for vets to be interviewed about their experiences on video or audio for others to learn about their contributions and observations of military service. When I asked if she had been interviewed, she answered no, but had added her name to the list of people waiting to be interviewed. Though not ready to fully discuss her experiences yet, she did however give us an outline about her time in active service.

While this former soldier looked young, she proudly admitted to being the grandmother of these two boys. Her other pride was this vintage 1990 t-shirt which she wore today. I think she described it as a R&R shirt that many soldiers received in theater. She hoped to donate it to the museum one day. 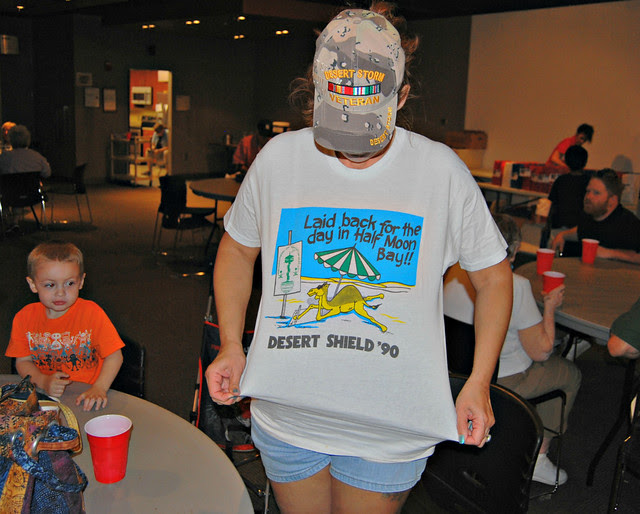 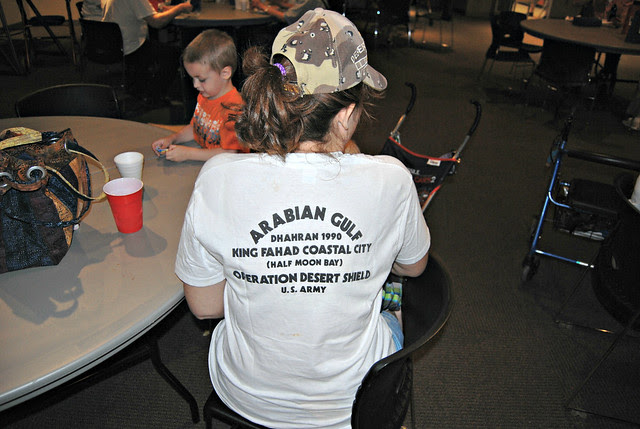 Other veterans visited the museum today. I overheard an elderly women tell a wheel chaired women that she served in Korea during the conflict in the 1950s. Another older gentleman wore his militay cap and a chest full of ribbons while he talked to a small group of visitors. Today was for observing, listening and trying to understand the contribution from those who served. Know that.
Posted by 42N at 10:50 PM No comments: 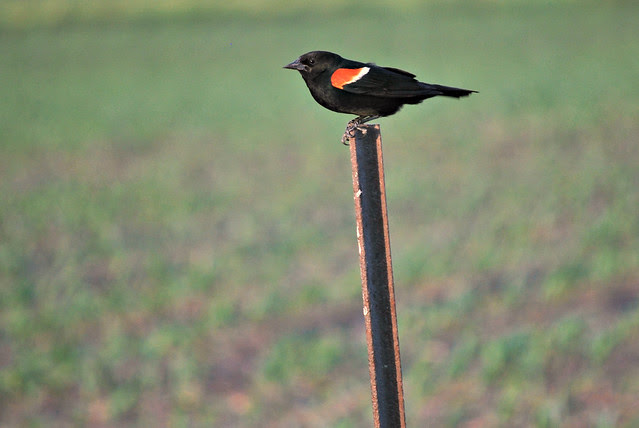 During Sunday's annular eclipse this redwing blackbird claimed her territory near a corn field southwest of Alburnett, Iowa. The bird did not do anything out of the ordinary as some reports claim of animals during an eclipse. While hunting for a location to observe the sun-moon transit the day before I observed similar avian behavior of turf defending. Additionally a coating of white stuff testifies that this post must be a popular location. I've made note of this bird activity for the next locally observed eclipse. Know that.
Posted by 42N at 5:58 PM 2 comments: 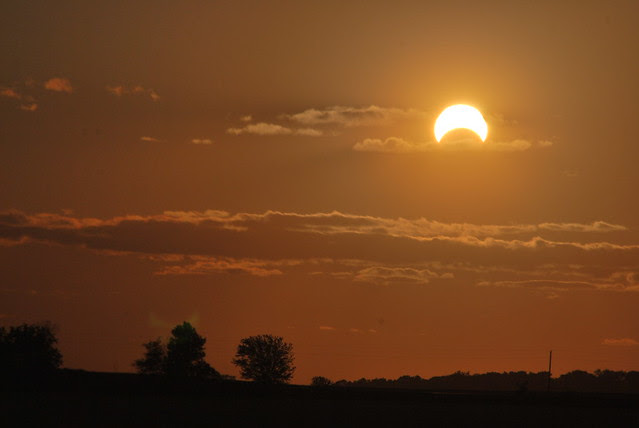 From 7:45 to 8:24 pm CDT today local sky conditions were optimum for viewing a celestial sight - an annular solar eclipse. Although watching the alignment at the beginning of the transit was quite bright, clouds and a thickening atmosphere made viewing better with each passing moment. The trick is to fine some interesting foreground structures, minimize lens flare and hope for timely passing thin clouds. 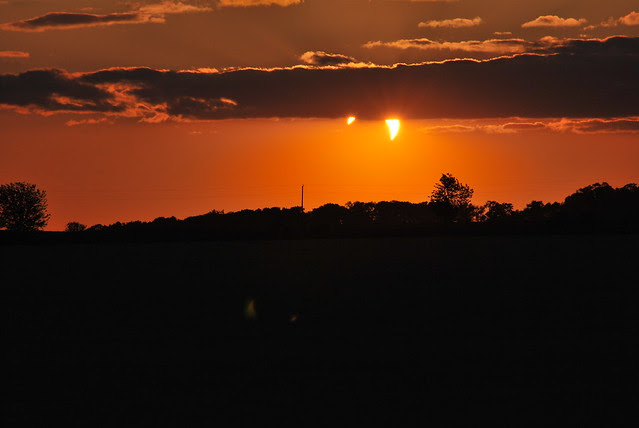 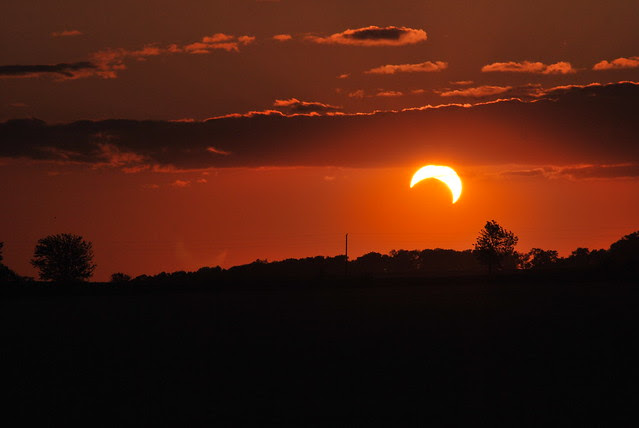 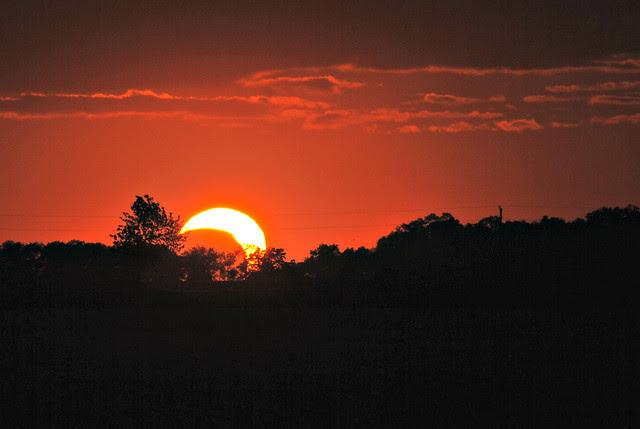 The sun and moon set before the transit completely passed. About 70 percent of the sun was blocked during this pass. Your next chance to see another transit of the sun is June 5 when Venus will move across the disk of old Sol. On August 21, 2017 a total eclipse of the sun will be visible in much of North America. Be there for these - and protect your eyes. Know that.
Posted by 42N at 10:28 PM 2 comments: 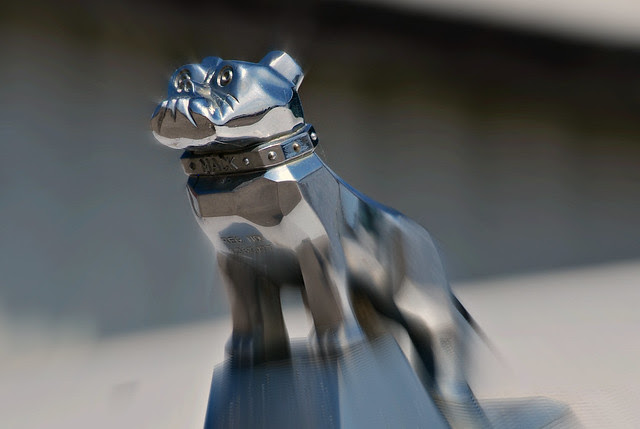 Mack the bulldog stands watch on the hood of a truck which bares his name. The highway truck is parked in a long term storage area used by city or county road maintenance workers. Noticeable on this mini statue are pit marks from the many road miles but overall he is in good shape. If you stand close to Mack you may hear him say, "Some kind of happiness is measured out in miles. What makes you think you’re something special when you smile?" Know that.
Posted by 42N at 10:16 AM No comments:

Groundhog Babies Have Their Day in the Sun 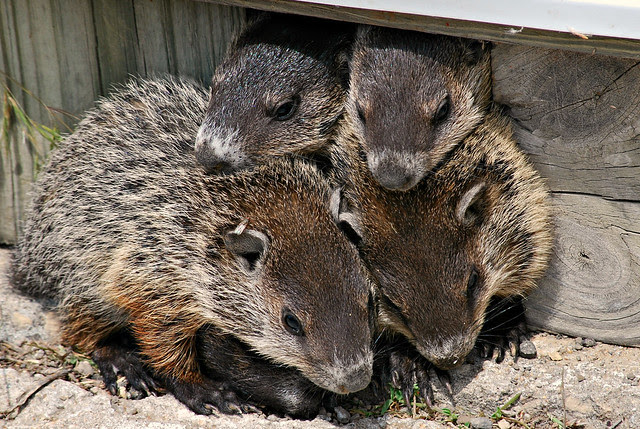 Groundhog babies make their way out of an enclosure to warm themselves today. While it appears that four groundhogs are peeking out, there were actually five or six fuzz balls near the opening. I don't know where mama was, but she was probably nearby searching for food for her young ones, just ahead of Mother's Day. Know that.
Posted by 42N at 9:24 PM 2 comments: 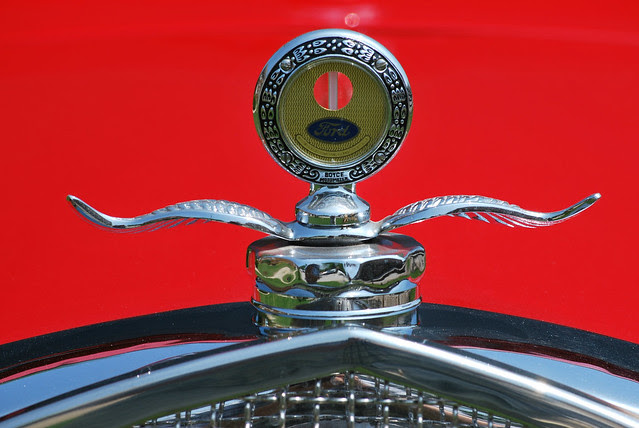 Model A cars turn up quite often around here for some reason. Recently a restored A parked for display at a local festival. This hood ornament comprised of a Boyce Motometer made in Long Island City, New York. The device measures the radiator vapor temperature via a liquid that rises vertically in a tube. Since the engine was not on, the temperature did not register. The patent for the motometer was granted in 1912 making the concept a hundred years old. This one was made by the Motometer G&E Company. In the design around the face parameter you can see the stylized G and E. A variation to the standard watch shape motometer is the inclusion of the wings atop the radiator cap. In the Roaring 1920s automobile designers took styling seriously. Know that.
Posted by 42N at 9:22 AM 2 comments:

Email ThisBlogThis!Share to TwitterShare to FacebookShare to Pinterest
Labels: Ford Model A, radiator

Months Ahead of the 2012 Harvest 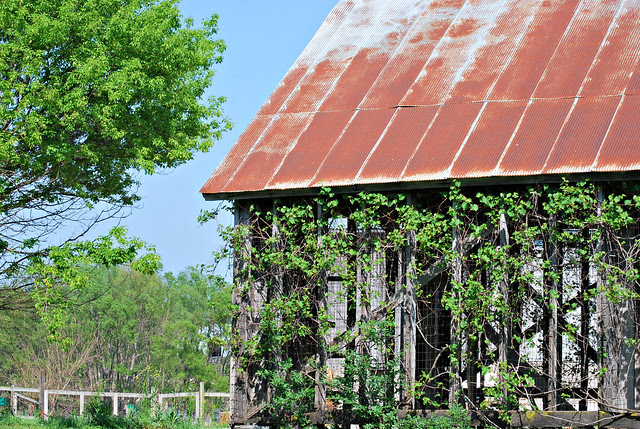 An empty corn crib stands ready for another harvest in just about 5 months. Heck, the corn just was planted around 42N. For now the structure serves as a vine climb. Know that.
Posted by 42N at 1:23 AM No comments: 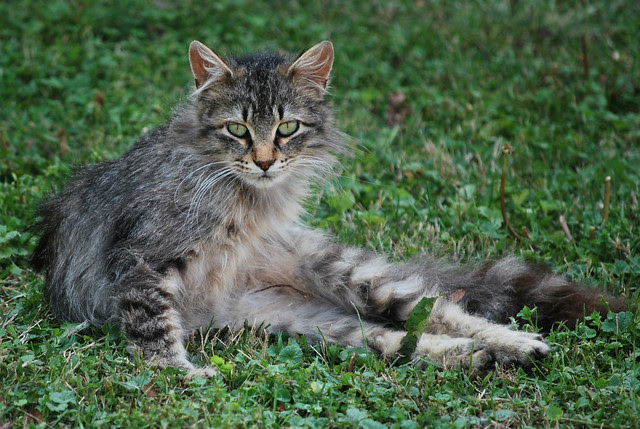 Occassionally several elements of photo composition, lighting and cooperation from the model come together. This was the case while in Amana, Iowa to photograph Maifest this past weekend. A bit removed from legions of visitors who absorbed the German heritage Spring celebration, this cat relaxed on a home's front yard. Situated between dandelions, creeping charlie and a few blades of grass, the feral-looking cat's intense green eyes complimented its surroundings with a message of "I'm tracking you." Apparently even the lure of brats, music and beer just blocks away was not enough to deter green-eyes from watching a strange passersby. Know that.
Posted by 42N at 3:16 PM 2 comments:

Many Faces of Amana's Maifest 2012 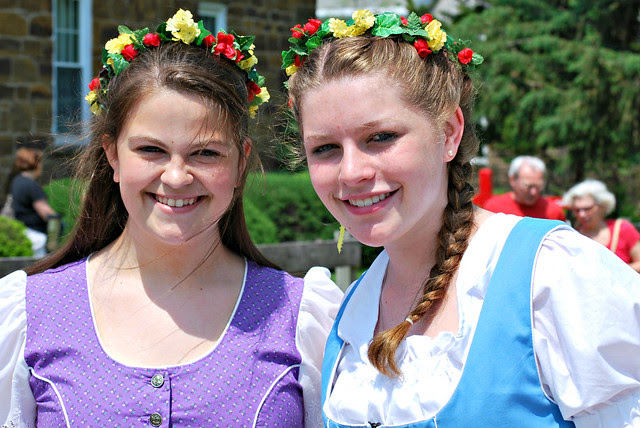 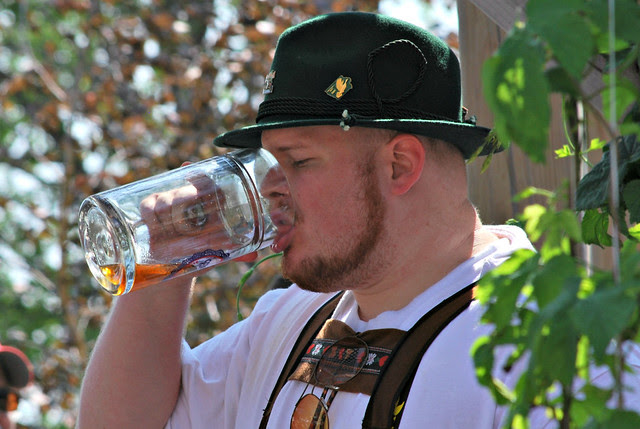 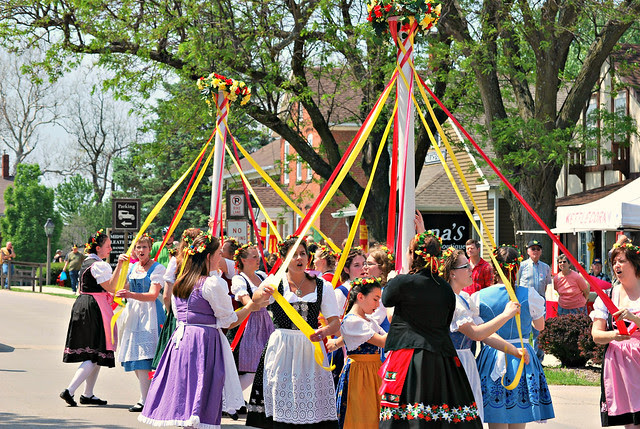 Maifest in the Amana Colonies is one of a series of annual celebrations with themes of season, German, Amana, agrarian, and family. This past weekend's three day celebration in Main Amana featured traditional May pole dancers, German polka music and of course lots of food and beer. Saturday's exceptional summer-like weather brought many people out early to see the sights, hear the music and chow on brats and locally brewed Millstream Beer. 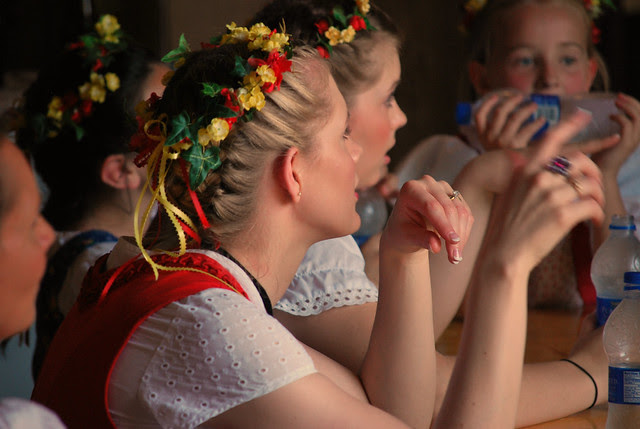 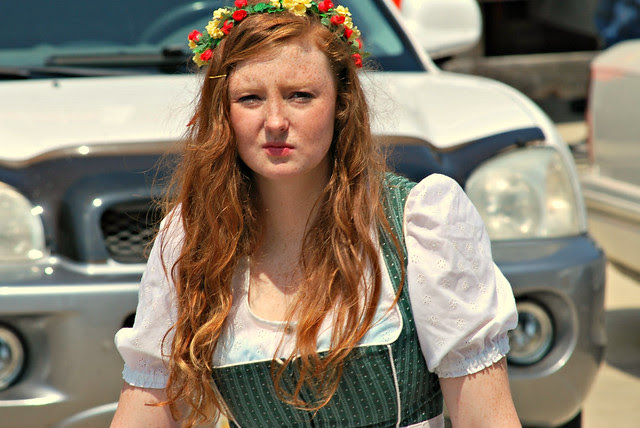 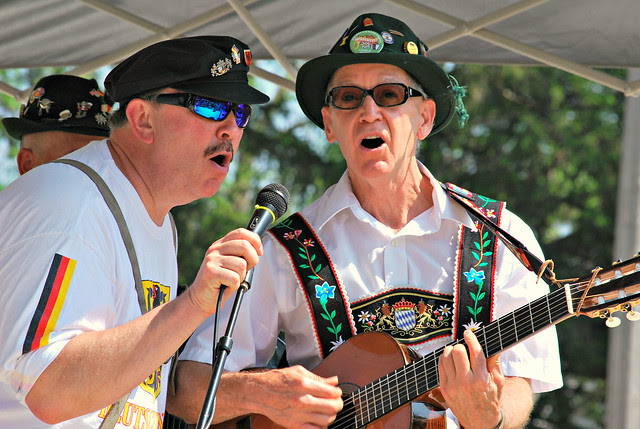 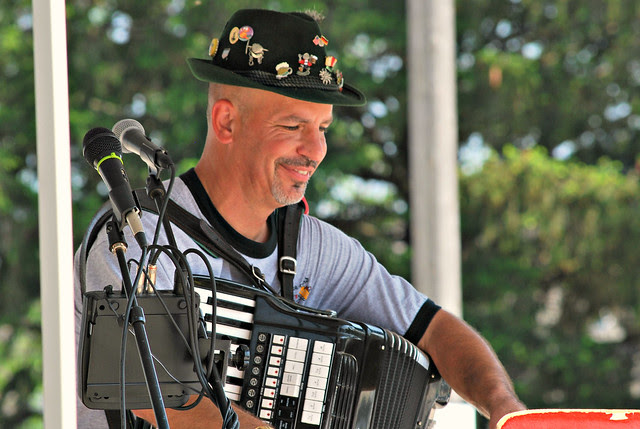 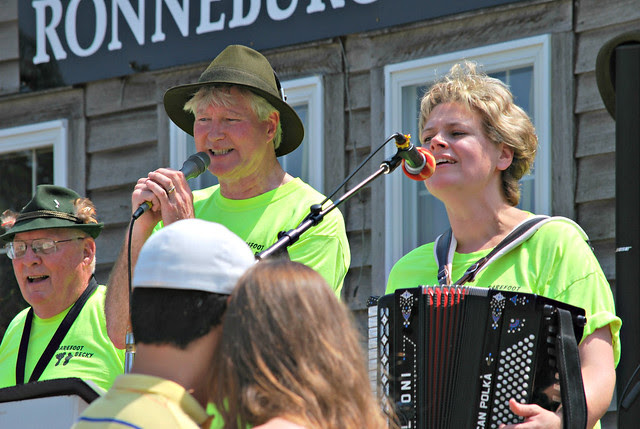 If you didn't have a chance to experience Maifest, be sure to visit Amana for these celebrations: Oktoberfest Sept 28-30, Tannenbaum Forest Nov 23-December 16, Prelude to Christmas Nov 30-Dec 2 or Winterfest Jan 26th. Know that. 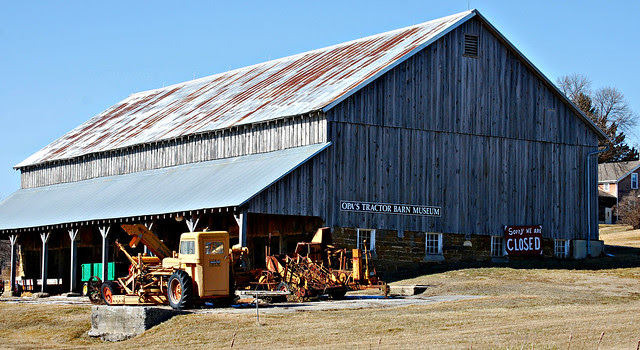 This barn, now a museum was closed the day that I went by near West Amana, Iowa. Looks like a great place for further photo opps. Know that.