Idyllic Amana, Iowa is the subject for photographers. From sandstone foundations and weathered cedar sided buildings to the mill stream and woolen mill, the sites are endless for the seven village communities.

A closer look at the farms surrounding Main Amana yielded something unexpected. Its a cattle impression located on a concrete floor (sidewall) of a feedlot or livestock retaining area. The image can be easily overlooked but on a sunny day the south facing wall produced a distinctive shadow outline.

Visitors can discover this symbol (which I have never seen exhibited in Amana photos) on their own journey. This weekend is Amana's Maifest celebration. Check out fun and search for the lost symbol in Amana.
Posted by 42N at 11:26 AM No comments:

Allegiant Air flies from here (Cedar Rapids, Iowa) to fun domestic destinations like Las Vegas, Orlando, Phoenix, Tampa, etc. On Sunday this jet, on final approach, flew directly overhead where I was positioned some 17 miles from the airport. Local travelers on that plane know (or should know) that here in mid-America we have fun things to see and do. Perhaps they tire of Midwest fun and long to see other sites. Its a theory.
Posted by 42N at 8:11 PM 1 comment:

Which Way Does the Wind Blow?

Today the prevailing winds came from the northwest. Tomorrow and the rest of the week look stormy. And one forecast model is actually predicting snow after May 2nd. Don't put away the snow gear yet.
Posted by 42N at 10:52 PM No comments:

Last week at this time Indian Creek was on the rise. Inflatable dams were deployed in the neighborhood to ward off waters from the creek. As fast as it rose, the creek came back within its banks in a few days and now is tranquil.

After each flood episode it is always interesting to see the aftermath. This time the creek pushed tons of pebbles and sand out of the bed onto the surrounding plain and downstream. The creek's water pressure wanted to create a new channel. With each event like this, the surrounding park takes time to recover with new plant growth. Who knows what seeds were washed to this location? We will see in a few weeks as temperatures warm.
Posted by 42N at 2:06 PM No comments:

Nearby Indian Creek swelled this week from over 4 inches of rain in two days. On Thursday as the creek spilled out of its bank partially filling a greenway park, the city of Cedar Rapids deployed inflatable tiger dams to help prevent residential flooding. Fortunately the early afternoon crest of the swollen creek did not reach the road this time.

By Friday afternoon crews deflated the dams and travel was allowed to use the streets again. Today the tiger dams and related straps, tubes and sandbags were still evident. With rain in the forecast for the next several days, the city can take its time in packing these preventative materials away.
Posted by 42N at 10:19 PM No comments:

Orange tube Tiger Dams are being installed in Cedar Rapids, Iowa this morning. Along Indian Creek the dams are being placed, filled with water and tied down to prevent rising waters damaging local homes.

Dams were installed at this very location in 2009 but were ineffective due to their installation at the time.

We received over 4 inches of rain in two and a half days. The drought is over but at the expense of rising water and flooding rivers and streams.

City crews have learned best practices since the 2009 flood.

While this is the second time tiger dams have been deployed at this site, the amount of effort for workers and equipment seem enormous. Another alternative to stop this flooding is being debated today.

The Cedar Rapids city council is expected to discuss the flooding issue at this morning's meeting. Back on the agenda is the construction of a berm along Cottage Grove Parkway (parallel and to the right of the road above.) Flood money is already approved according to Councilwoman Ann Poe (who was on the scene this morning) but the go-ahead seems to be at the council level and with the Iowa DNR.
Posted by 42N at 11:34 AM 1 comment:

I found this McCormick-Deering in a flower garden at the Clinton County Fairgrounds in DeWitt, Iowa.

These implements were designed as horse drawn mowers of hay or other grassy crops. At the base of the seat is a plate that displays MB 1475, perhaps the model number designation. This model was most likely built from 1914 to 1934.

Many times these types of mowers are found in similar garden settings or as outdoor decor for rural homes or barns. The perforated seats, as well as those metal seats found on tractors are highly collectable items in midwestern markets. Seats are treated as-is or painted with barn scenes and generally hung as wall art.
Posted by 42N at 11:50 AM 2 comments:

Yesterday I wandered around a county fairgrounds looking for anything to photograph. After reading Jeannelle's Midlife by Farmlight's blog entry today about a robin on her property I decided to publish these images from my fairground tour.

On that windy day a robin let me get fairly close before flying away. A mourning dove also let me get close before it took off from this tree. I am guessing that both birds' nests were closeby since the birds immediately returned.

Jeannelle said the blogosphere may be filled with robin photos. When robins or other feathery creatures permit, like Jeannelle I will also snap their photo - and most likely post.
Posted by 42N at 10:29 PM 1 comment:

Ever see a triple faucet combination? Me neither. This plumbing masterpiece is attached to a water line outside of a county fair livestock showcase. My guess is that the animal caretakers must need several access points to capture or divert the liquid. Perhaps hoses run off this configuration while a single faucet fills a bucket. Who knows? I'll have to return at summer fair time to discover how triple faucets are used.
Posted by 42N at 9:22 PM 1 comment: 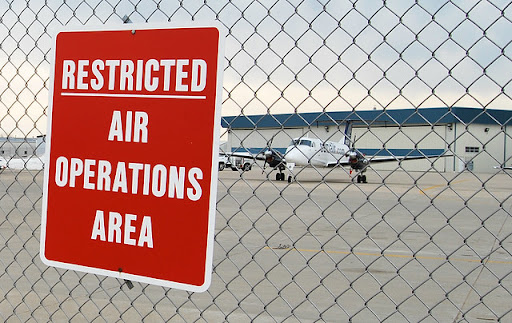 Nothing like a fence and an in-your-face sign to take the joy out of plane watching. Some small airports don't have many barriers to photographing aircraft while mid- to large airports heavily restrict visual access, let alone casual wandering. In this case a Subair.com (short for Suburban Air Freight) craft sits ready for its next frieght or personnel airlift assignment. Options for the observer is to put up with the wire fence distraction or to peek through the mesh. As a photographer I vote for sticking the lens through the fence and snapping away. Besides, like the song says 'Do this, don't do that, can't you read the sign?' can make for a more dramatic photo.
Posted by 42N at 5:38 PM 1 comment:

A Bridge Not Too Far 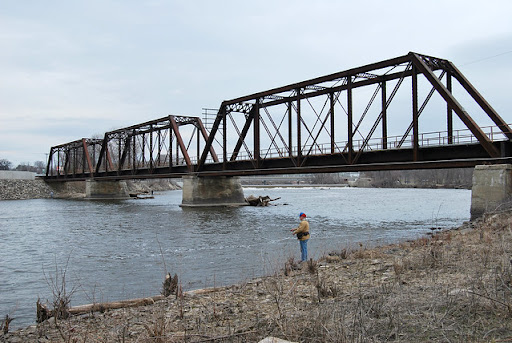 Along the Cedar River in Cedar Falls, Iowa the walleyes have started to bite. Each Spring the fish swim past this bridge to the nearby roller dam. There they discover a cement wall and travel no further upriver. Some walleye spawn in the bridge area while others retreat downriver. Several anglers tried their luck this day but nothing was biting. 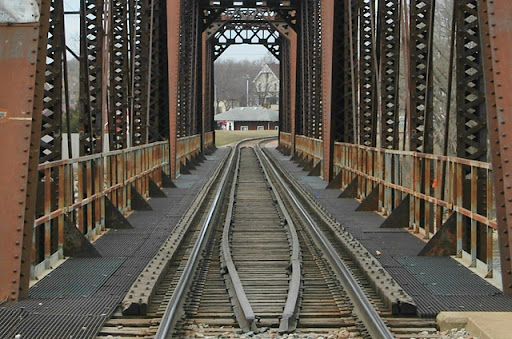 Spanning the river is a Pratt through truss bridge used by the Canadian National Railway and was built in 1899.

The walleye angler told me he heard stories of a covered bridge at this location prior to 1899. People complained the bridge's interior smelled from the locomotives' smoke of the day.

That is not the case any more. The truss design is open and the locomotives don't belch too much these days. And by the way, no one is permitted to trespass on the bridge, let alone fish for walleye from the aerial vantage point. Good to know.
Posted by 42N at 10:22 PM 1 comment:

Adding to my post from yesterday is this head on view of a Chevrolet Corvair's steering wheel as seen through the windshield. Dried dirt marks the glass but does not take away from the interior's range of vivid blues.
Posted by 42N at 12:07 AM No comments:

This Corvair is Safe Even At Zero Speed

A 1960s era Chevrolet Corvair slowly sinks into a gravel parking lot in Waterloo, Iowa. The owner intends to restore the car but the timeline on his project seems to have found mission creep. Corvairs were called 'Unsafe at Any Speed' by Ralph Nader for issues related to swing axle suspension.

While other autos of that era had the same suspension mechanisms, the Corvair became the poster child for a popular car with alleged poor engineering. More surprising was the positioning of the gas tank ahead of the driver. Meanwhile the engine was located where trunks are normally placed - like VW Bugs. In the 1960s people were drawn to the car's unique looks and speed. Today the Corvair is an icon of the era and continues to draw thousands of fans to auto clubs.
Posted by 42N at 12:26 PM 1 comment:

You Know its Spring When Air Tractors Arrive

Like returning robins, the turning back to daylight savings time, and consecutive non frost mornings, a sure sign of Spring is the sight of an aero sprayer. Currently tied to the tarmac at the Waterloo Regional Airport is this five bladed crop sprayer, ready to go for the season.

By tracing the identification number on the side of the aircraft this is an Air Tractor AT-602 model which entered service on March 16, 2004. The agricultural flyer zooms up to 198 mph, has 600 mile range and carries 630 gallons of spray (located just ahead of the pilot,) all courtesy of the 1,050 hp turboprop engine. When working a field these sprayers are fun to watch, which may be within the month or so.
Posted by 42N at 6:53 PM 1 comment:

Spring Branch Trout in the Springtime

Spring branch, a spring-fed stream supports these two rainbow trout located on state fish hatchery property near Manchester, Iowa. About 50 yards downstream a fly fisherman tried his best to catch these two colorful swimmers and their brethren. He didn't have any luck while I was there.
Posted by 42N at 8:27 PM No comments: