Simple Elegance of Mystic No. 160 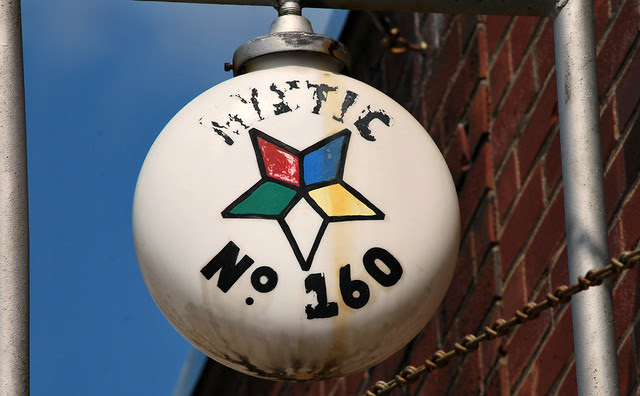 Old areas in towns often have interesting objects to photograph. In a small western Illinois town near the Mississippi River is a tiny brick building with one door and a two globe sign. 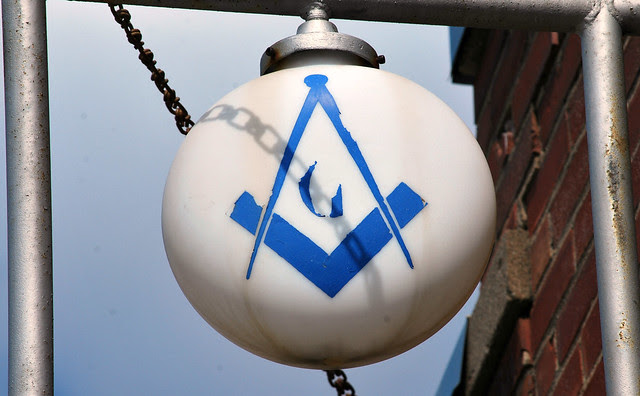 Weathering of masonic symbols may be nothing new but generally their building structures last a long time. At a related mason structure just a few weeks ago (Scottish Rite Temple) the public gathered for a post St. Patrick's Day party. That building is filled with symbology, columns, vaulted ceilings, stonework, etc. This building in comparison stands in stark contrast with its simple design and fading globe identifiers. Know that.
Posted by 42N at 1:33 AM No comments: 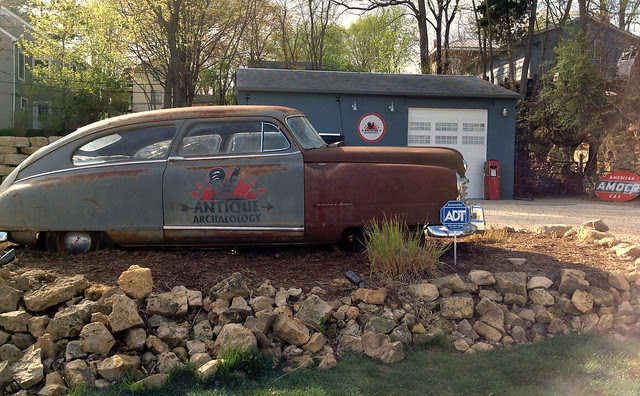 Last Sunday the American Picker's Antique Archaeology place in LeClaire, Iowa was packed with motorcyclists. The recently expanded gravel parking lot (left of the old car) held a staging area for two wheelers before they rode off late afternoon. Meanwhile inside the business, the garage door was open and a women appeared to be working - might have been Danielle. Since it was crowded we didn't pull in. 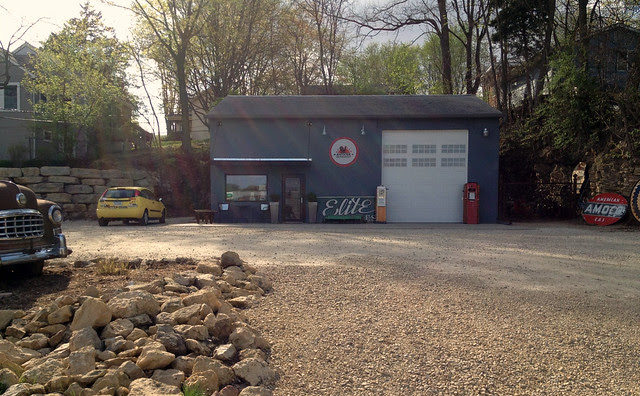 After an hour we returned to the business to find it closed for the day. Someone was cleaning the inside door. Could be Danielle. Other postings on this blog pertaining to the American Pickers are often visited when the show airs. The search term most used to find the American Pickers is "American Pickers Danielle." Not Frank. Not Mike. She must be the real treasure. Know that.
Posted by 42N at 1:30 PM 2 comments:

PBR Welcomes You to the Upper Midwest - Illinois Style 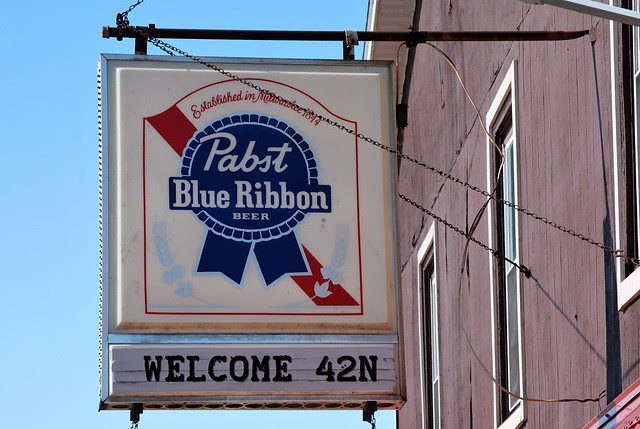 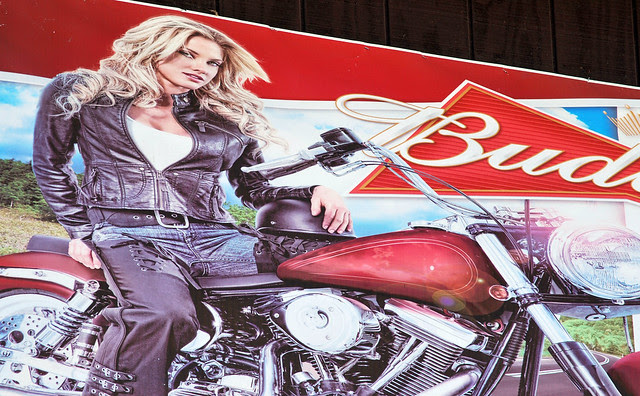 Fulton, Illinois knows how to welcome nearly famous bloggers into their world - and with class. Where else does one receive a public welcome on a highly visible PBR sign located on a well traveled road? While the PBR welcome sign can clearly be seen as one drives towards the city's huge windmill on the Mississippi River, perhaps its the more flashy Bud banner located just 90 degrees right of the PBR sign that draws the most attention. Know that.
Posted by 42N at 3:23 AM No comments:

Last Week of Winter Before the Spring Rains 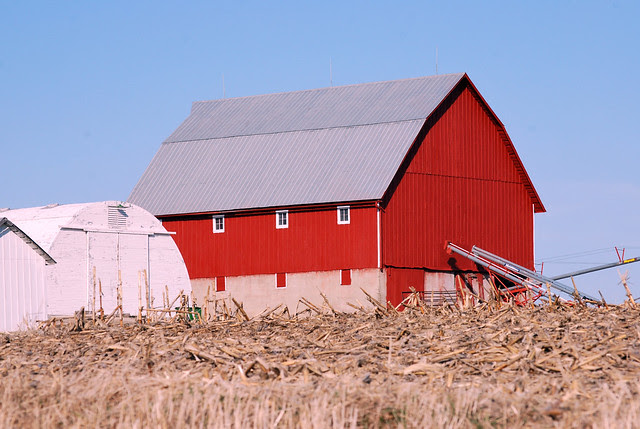 A week ago when this photo was taken, Iowa just completed the warmest winter on record. Along the 42N latitude ground cover generally took on this overall color of yellowish brown. Lovely but hey, no snow. I don't have an "after" photo of this scene to share but rest assured that green has busted out. More warm temperatures and generous rains fueled the upper midwest's growth of early season green plants. Time to condition the mowers - it won't be but a few days, maybe a week before the spinning blades are cutting grass again. Wonderful. Know that.
Posted by 42N at 4:45 PM 1 comment: 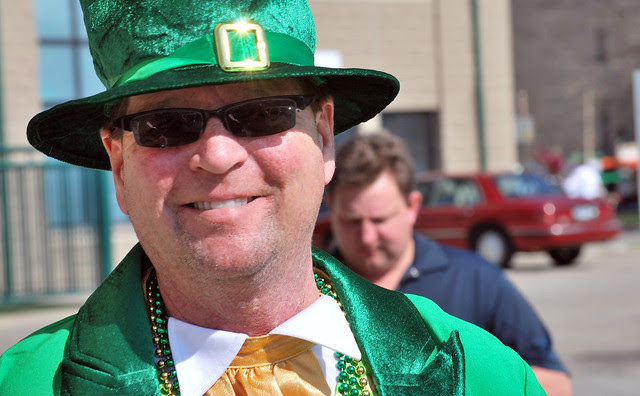 Add warm (hot) weather plus a weekend, plus a holiday and you get an overflowing St. Patrick's Day celebration in 42N's Cedar Rapids, Iowa. Green was everywhere. Tens of thousands of people and pets came downtown to see or be part of the largest parade in city history. Float applications had to be turned down because of the number of participants in the parade exceeded existing city permit allowances. 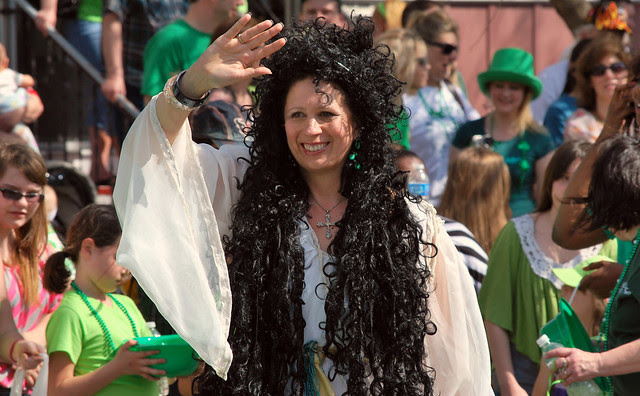 Locally the SaPaDaPaSo (St. Patrick's Day Parade Society) stages the celebration with a huge parade and followup awards meeting. Basically its an opportunity for mass celebration, silliness and the sipping of adult beverages. 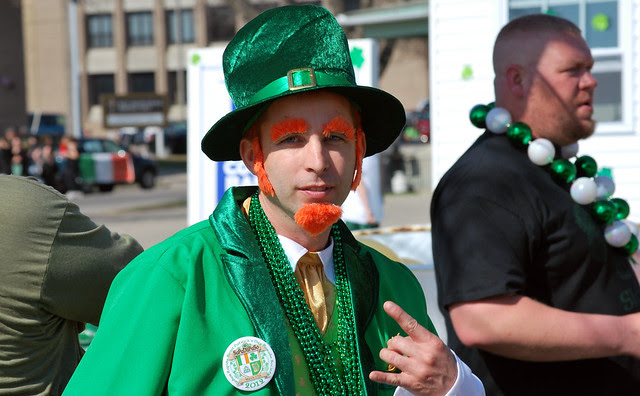 Outside of society and commercial float themes, like the local Girl Scouts, fire departments, civic groups, etc., other parade constituents made their fun too. Families of Irish descent marched along pleas for cash donations for illness and fire victims. This orange trimmed leprechaun was recently talked into being his float's main focus as he just became engaged. Oddly, his fiancee did not join him on the float. Perhaps his Irish luck was not too lucky. Know that.
Posted by 42N at 12:45 PM No comments: 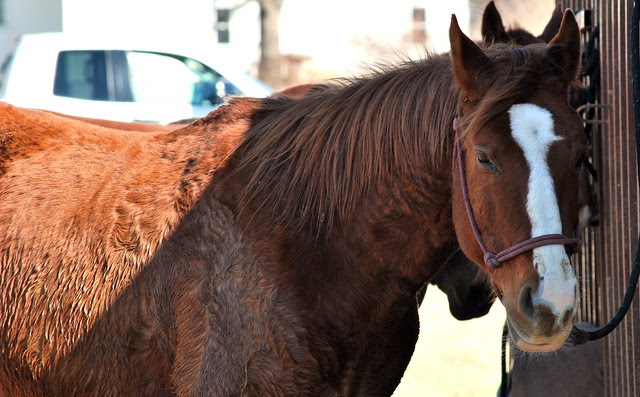 Following a working demonstration at a horse show and auction, this participant waits to be brushed out after the removal of riding gear. Unseasonably warm weather helped cool this four legged cattle cutter with the added benefit of no irritating insects flying around. Know that.
Posted by 42N at 12:47 AM No comments: 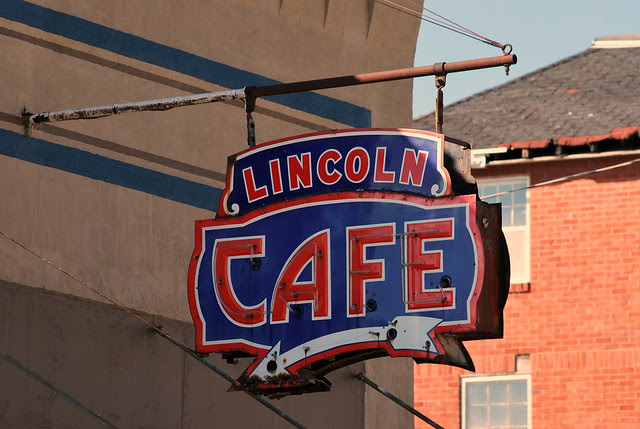 A staple for Model A drivers on the Lincoln Highway was and is the Lincoln Cafe in Belle Plaine, Iowa. The restaurant has seen a variety of owners throughout the years but currently seems to be thriving under new management. Without doing the research, this iconic porcelin and neon sign may be as old as the cafe itself - roughly built in 1913. Symbolically the arrow points westward towards the Lincoln Highway's terminus in California.

Across the street (the Lincoln Highway) is a light orange brick building which was the Herring Hotel for road travelers and railroad workers. Today the building stands in need of major repair including a roof.

While Big Jumbo, the artesian well remains capped just a few blocks away, the excitment of the town's new main street and museum have reframed the town's past with the present, including the still functioning Lincoln Cafe. Know that.
Posted by 42N at 7:45 PM No comments:

Brush Fire Contained Near I-380 and Kirkwood - Cedar Rapids 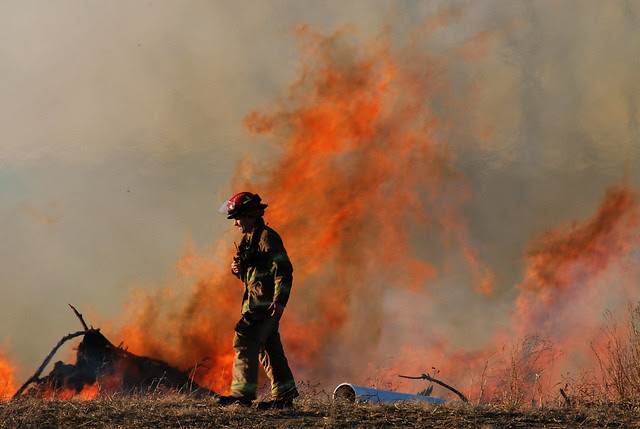 Windy and dry conditions last Saturday provided fuel for a brush fire just off Interstate 380, south of Cedar Rapids. Spectators watched emergency crews from Cedar Rapids, Ely and Swisher arrive to fight the fast moving fire. Some speculated that a discarded cigarette from a vehicle along I-380 started the dry grass on fire. Very strong westerly winds pushed the fire eastward toward the Kirkwood dormitory apartment area. 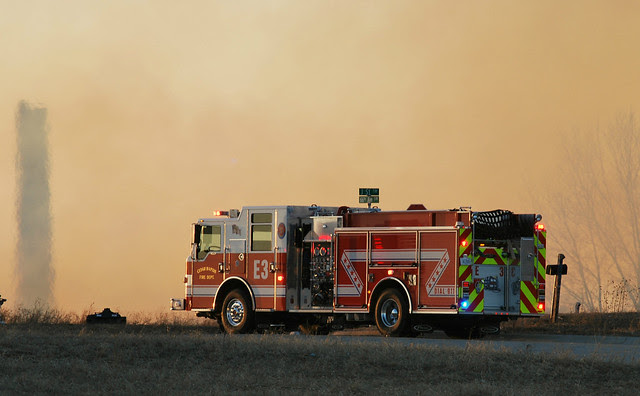 Emergency crews arrived with brush fighting equipment. Fire fighters dug fire lines while others hosed the flames directly. A construction debris pile containing disgarded plastic pipes, wood and other possible combustibles was comsumed by flames. Crews worked to contain this pile as well as the path to a nearby farm building. At some point during the evening the fire was extinguished.

The next day I compared my photos with that in the local newspaper. My portfolio was on par if not better than what was published - although timing and access was in favor of the newspaper. Know that.
Posted by 42N at 10:35 PM No comments:

Visual Journey from Sirius to Betelgeuse and Rigel 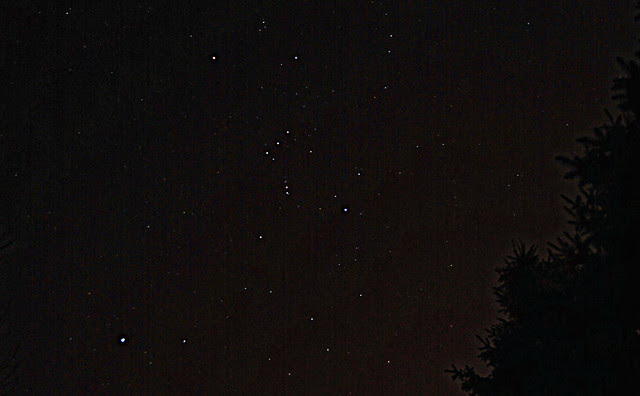 Go out tonight if the sky is clear around 8 pm local time (in the northern hemisphere) and you'll see this star pattern in the southern sky. I took this image last week framed with my backyard tree. One of the most recognizable constellations, Orion the hunter, dominates this sky scene. You can make out Orion's human shape complete with three belt stars.

The bright star in the lower left corner of the photo is Sirius, a huge blue-white star, actually two, in the Canis Major (the dog star) constellation. Sirius is the brightest star in the northern hemisphere and is located a mere 6 trillion miles from us.

Betelgeuse is the reddish star located in Orion's upper left shoulder. Its a massive stellar object whose surface has been resolved through some special telescopes to reveal sunspots. If placed in our solar system Betelgeuse would extend from our sun's location to the orbit of Mars. That's huge!

Look at the three belt stars in Orion and notice the stars positoned below on the left side. Those are known as the dagger or sword of Orion. Actually one object is the Orion Nebula - M42. Its a star making factory that is 5,600 light years from Earth. The Hubble Space Telescope has captured detailed images of the nebula's young stars and proto-stars. A fascinating place.

See what you can find on your next nighttime outing even without a telescope or binoculars. There's plenty to discover, including the very bright International Space Station zipping overhead. Find ISS with help from Space Weather. Know that.
Posted by 42N at 9:48 PM No comments: