Coal Creek in the Black Forest 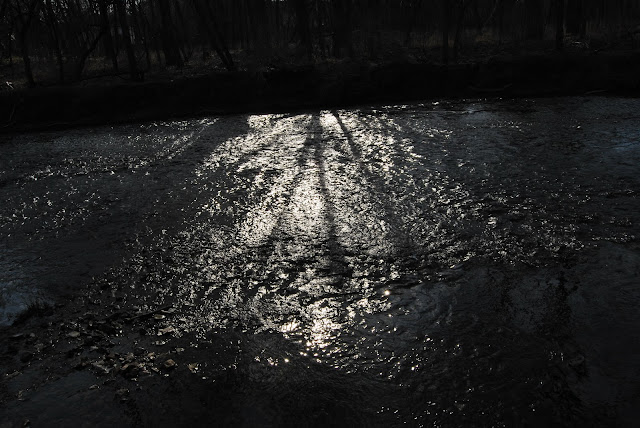 Black water runs through a dark forest, right? Nope. Actually this is what the world looks like in full color (no black and white conversion) at f/20 with a 0.016 second exposure. Check out the tree shadows on the moving water - another extra texture example.
Posted by 42N at 9:27 PM No comments: 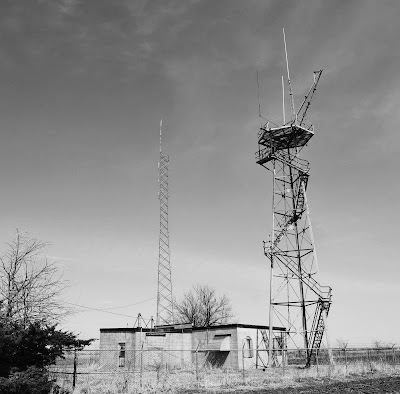 A Sunday drive to the southern part of eastern Iowa confirms no more snow, abundant drying farmland and the annual migration of field equipment from storage to staging areas near agriculture production centers. Southwest of Washington, Iowa rising prominently above flat fields, the eagle-eye 42N team came upon this interesting structure (above.)

The tower and building look to be of military origin or avionic related. FAA mid-continental navigation aids are or formerly were located just of few miles north of this location near Hills, Iowa. On sunny days east and west bound commercial flights can be seen nearly overhead. Was this structure something related to that? If military in origin, what was the function of this fenced facility? 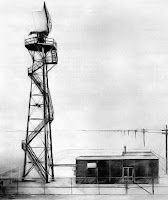 Turns out this now defunct tower's function was far more important than what appears to be a radio antenna. During the Cold War, the responsibility for the defense of the US skies was with the US Air Force. About sixty years ago the USAF began building a series of installations to form a permanent radar network. The main function of the Washington, Iowa site was to fill the northern gap of radar coverage emanating from the Kirksville, Missouri Air Force Station.
Radar stations like the Washington, Iowa facility, like this USAF image (left) served as part of the Cold War defense program. Washington's mission as a warning station was to provide ground control intercept data to Kirksville. Washington, Iowa radar provided aircraft direction, speed, altitude information and whether the craft was deemed friendly or hostile. 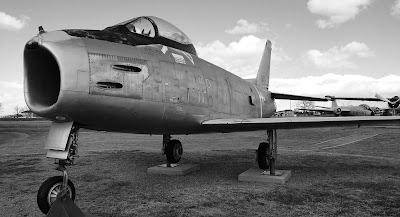 Once the information was analyzed and a decision made, military aircraft scrambled to investigate unidentified or hostile craft. In the early part of the 1950s I imagine the go-to USAF interceptor was the F-86 Sabre, like this one from Ellsworth AFB in Rapids City, South Dakota. Sabres based around the Iowa-Missouri-Illinois region had the capability to zoom at a 687 mph maximum speed up to a 50,000 ft ceiling to find and engage hostile craft that dared enter Washington, Iowa airspace.

Today this rural situated tower may be a private radio operation. But more importantly, no passing Soviet MiGs were spotted over the Washington skies today either. Know that.
Posted by 42N at 10:05 PM 1 comment: 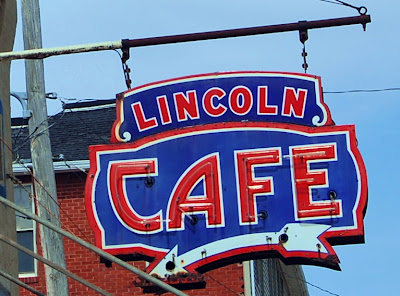 ﻿
During the past year or so the fate of Belle Plaine, Iowa's Lincoln Cafe was on hold pending a new owner and a top to bottom remodeling effort. The diner re-opened in November 2010. 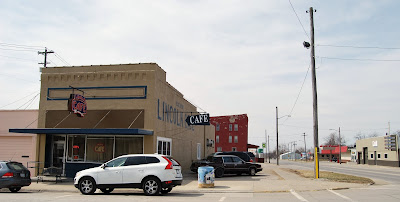 This restaurant originally opened in 1925 catering to motorists on the famous transcontinental Lincoln Highway. In the above photo the highway can be seen on the right side running west and east. On Saturday the restaurant was full of folks eating their midday meal while a large private birthday party for a 92 year old town resident took place in a back room. It would be interesting to ask the party girl what she remembered of the diner and historic highway. But that had to wait, she was busy eating a red velvet cupcake. Know that.
Posted by 42N at 10:01 PM 3 comments: 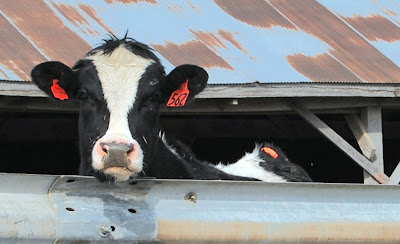 Today's warm weather pulled the 42N team over a few counties to the east. In Jones County, Iowa the rural livestock residents took time from their mid-afternoon feeding to gaze upon us as we looked at them. 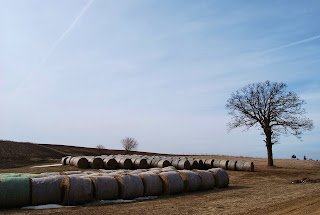 We also observed several farmers moving hay from storage areas like this (left) to feedlots or pastures for their livestock.

Other observations included these telltale signs of Spring - large new inventory at local John Deere dealers, muddy tire tracks on hard road surfaces, and the smell of wet earth. With one week before Spring begins the world observed here along the 42nd parallel corresponds to the calendar. Know that.
Posted by 42N at 10:15 AM 1 comment: 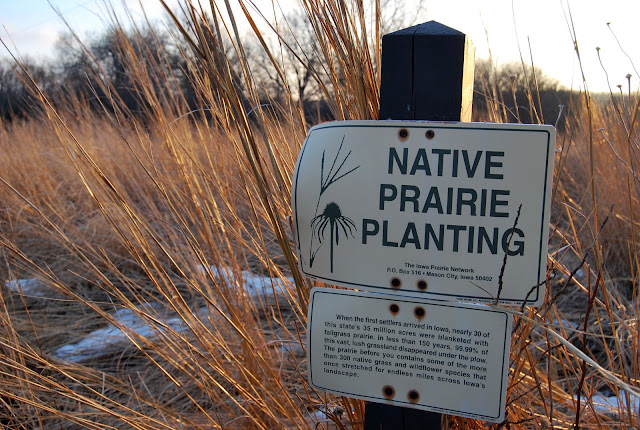 Tall grasses from the last year's growing season shelter snow even during these days of increasingly warmer weather. With ten days before spring a few last chunks of snow may melt off this stand of 4' - 6' high prairie grass, located just a few miles from the 42N HQ - as the hawk flies. Know that.
Posted by 42N at 8:38 PM No comments: 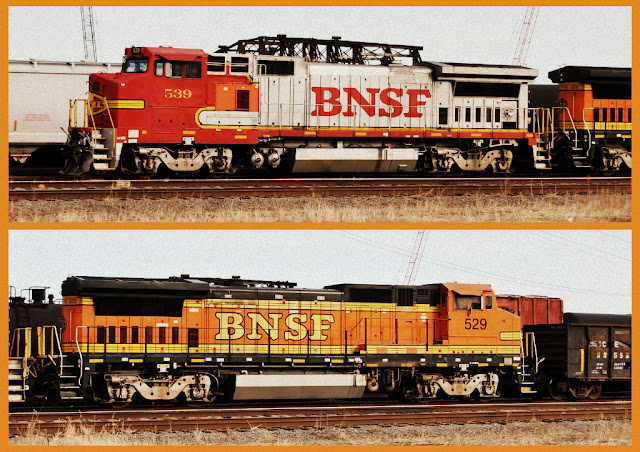 At the Burlington, Iowa yard a couple of locomotives rev their diesel engines preparing to do work. The Burlington Northern Santa Fe locomotives numbers 529 and 539 were built in October 1990. Today these two workhorses were seen linked together in preparation of moving some grain or coal.
Posted by 42N at 10:25 PM No comments:

Burlington's Span Across the Mississippi River 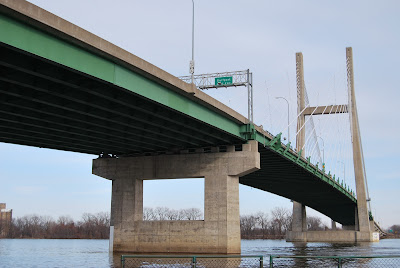 Before Des Moines was the capital of Iowa there was Iowa City, which served as the second territorial capital and later the first state capital of Iowa. Before Iowa City there was Burlington which served as Iowa territory's first capital site in 1837. Part of the reason for the city's location is the Mississippi River. On this warm late winter day the river is free of ice, the barge traffic was seen moving empties upriver and a few bald eagles flew overhead. 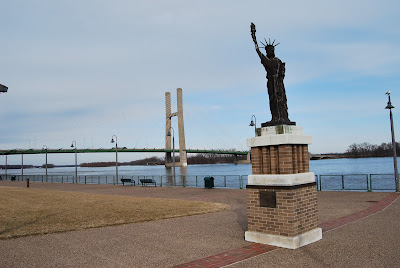 Near the Port of Burlington building is a view of the Great River Bridge. The asymmetrical stayed bridge opened in April 1990 at a construction cost of $49 million. In the foreground is the Lady Liberty of Burlington statue which is very similar to the same statue (size, composition, color) located in Cedar Rapids. Both statues are connected to the efforts of the Boy Scouts. In 2008 flood waters reached the black line above the plaque on the base of the statue. Similarly in Cedar Rapids the flood of 2008 reached the statue's body. Coincidence? Know that.
Posted by 42N at 9:01 PM No comments:

Winter's Beauty in the Badlands 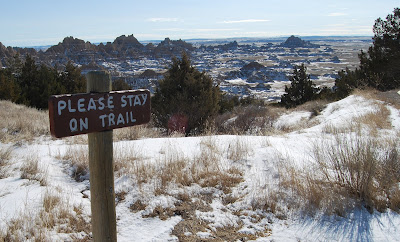 Mid-February is not my idea of the time to visit South Dakota's Badlands. Circumstances led the 42N team to venture from eastern Iowa to Montana with several stops along the way. I had never been to the Badlands but recall seeing brilliant photographs of the eroded landscape taken in much warmer times. So when the opportunity presented itself to visit the park we seized the day. 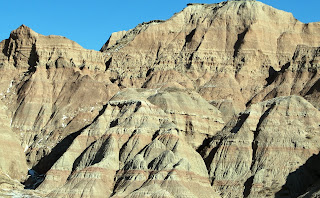 Realize that in mid-February while there was little snow in the park, the unrestrained wind gusted and the temperatures were rising into the 30s. This being the middle of winter meant that several businesses located near the park's entrance were closed for the season. The visitor center was open as was the in-park hotel (or lodge complex.) We experienced contact with four other cars in the park during the time we were there.
I had no idea as to the enormous scope of the Badlands. Standing at a number of lookout points you can see the eroded hills from horizon to horizon. Apparently many of the hills are composed of what appears to be soil including various clays - from ancient marine bed sediments. I'm sure there is rock and other things in the Badlands makeup but I haven't researched that aspect yet. 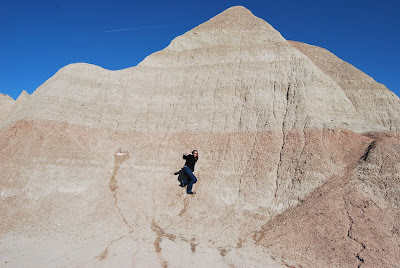 The youngest member of the 42N team decided to climb the natural pyramid looking for an entrance to the Queen's chamber. She got temporarily stuck on the climb by mud oozing from under the dry surface. Since she didn't want to get any dirtier the team member abandoned the climb having never found any secret entrance. After seeing many antelope, sheep, hawks and prairie dogs in the park we continued our westward journey to Montana stopping at nearby Wall for lunch and to see what the billboard signs all referenced for a hundred miles - Wall Drug Store. Know that.
Posted by 42N at 10:10 PM 1 comment: 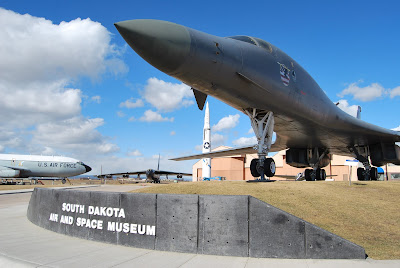 What secures the United States? People do. People who are aided by powerful delivery platforms secure our safety daily with, among other things, extensive aerospace technology. Near Rapid City, South Dakota’s Ellsworth AFB at the entrance to the active base is a collection of former war birds that include WWII era aircraft to Cold War missiles and today’s modern bomber.
South Dakota Air and Space Museum features outdoor static displays as well as an expansive indoor hanger area with a missile silo mock-up, bomber training simulator and much more.
A Rockwell B1-B bomber stands as the centerpiece to the museum. An active number of these bombers are based at Ellsworth AFB. Training missions involving the B1-B can be observed as we did on that day. 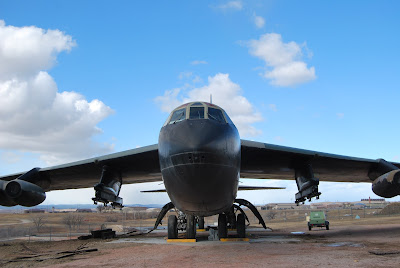 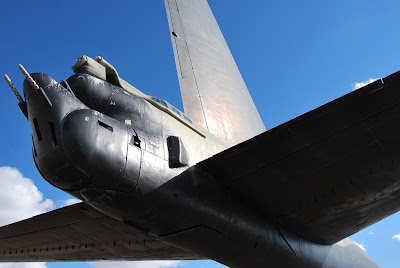 At the side of the museum hanger is a Vietnam-era B-52. These venerable bombers were introduced in the 1950s and are still in service today – not bad for a fifty year old warrior. This particular BUFF (Big Ugly Fat Fellow) as they were politely called is painted in jungle camouflage. 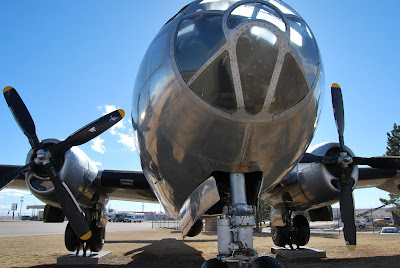 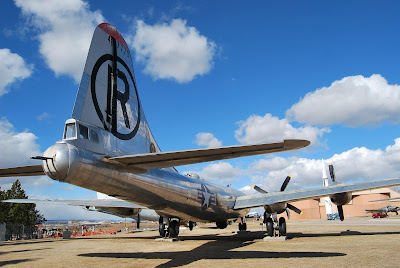 Another member of the Ellsworth family is the World War II B-29 bomber which is seen here. B-29s delivered the final blows to end the war in the Pacific. This particular B-29 is called Legal Eagle II.
﻿ 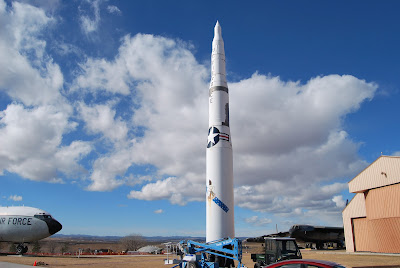