It is summer - no doubt about that. Last evening a powerful thunderstorm flared up over 42N land, dumping much needed rain and producing winds at up to 65 mph. Today, like yesterday, is again hot and very humid. How hot is it you ask? Hot enough for the air above the steel rails of the Union Pacific railroad at Lisbon, Iowa to produce mirages of wavy lines. Look for yourself. The only photo manipulation to this image is color correction and cropping.
Posted by 42N at 7:03 PM No comments:

50 Shades of Gray and Other Colors

Nothing steamy here. It's always interesting to see the black and white (b/w) version of a color photograph. Back in the days of Kodak Tri-X the world was seen in shades of gray. With practice you can actually perceive scenes in b/w based on color content and tonal qualities. The biggest standout of these photos is how green leaves are seen in shades of gray - almost none existent. B/W also tends to add a moody component that color sometimes does not. The rail cars were photographed near Hawkeye Downs in Cedar Rapids, Iowa.
Posted by 42N at 9:37 PM 2 comments:

Rendezvous time at Villa Louis in Prairie du Chien, Wisconsin brings it all out; buck skinners, frontiersmen, soldiers, natives and tons of spectators. You can watch demonstrations of frontier life from back in the 1700s. You may also buy things from people dressed in puffy shirts, coonskin hats and loin cloths. Beware; there are some sights to be avoided if you want to keep your eyes intact. Mine are still recovering from the solar eclipse from a few weeks ago.

Outside of the Rendezvous parameter are scores of flea market vendors from all over the country. They sell pretty much anything you want - food, drinks, clothes, books, antiques, records, car parts, jewelry, and even gator heads. Many vendors tell stories of how they got into this business first as collectors then later as dealers.

Bearded hat guy watched over his eight tables filled with small antique and collectible items. His choice of truck was a gray hearse. He talked of being able to pack a lot inside the long vehicle which was purchased cheap. Over the three day flea market period he slept outside on the ground. In the mornings the hardness of the dry ground bothered his back. He thought about sleeping in the hearse during his last night there.

Another vendor displayed various car parts and tools from long ago. Colorful VW bug fenders drew much attention but no sales - maybe his pricing was too high.

And lastly the Stay Puft Marshmallow Man seemed quite subdued as we passed by. No doubt Gozer was plotting ways to spring to life and walk through the flea market as a giant 100 foot marshmallow fellow terrifying all – not unlike loin cloth man. My eyes!
Posted by 42N at 9:36 AM 13 comments:

This property recently lost its farmhouse, which honestly needed to come down. However this barn is still in good shape and continues to be a useful structure in the annual crop production. This barn is located on the old Lincoln Highway halfway between Cedar Rapids and Mount Vernon, Iowa. As such the land may be sold off for residential properties one day as the cities grow toward each other. For now we can still admire the barn and land as they have existed for years.

An official 42N proclamation of Flag Day 2012 to you. Old Glory looks pretty good in the evening breeze from three days ago. Salute.
Posted by 42N at 12:01 AM No comments:

Email ThisBlogThis!Share to TwitterShare to FacebookShare to Pinterest
Labels: US flag 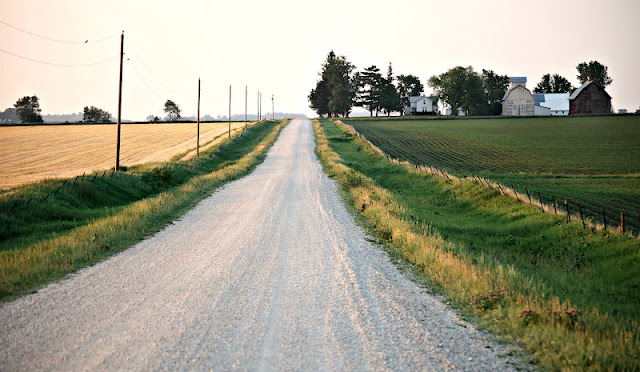 North bound on a gravel road. Sun is setting to the left. Blackbirds are perched on the power lines. Hay is cut and corn is coming up. Late Spring in Iowa.
Posted by 42N at 8:54 PM 2 comments:

A transit by a planet across the disk of the Sun is rare. After being clear all day, some late afternoon clouds formed and hung around a few hours while Venus made its trek across the Sun. Tonight as I waited for the Sun to dive from the cloud deck as it neared sundown, I was hoping that a perfect orange sphere could be seen with a tiny black dot. This was not the case here in 42N land.

At sundown I was in contact with a fellow astronomer in Rochester, Minnesota. He had perfect weather and sophisticated equipment to do some direct magnified viewing of the Sun and Venus.
I parked in a bank parking lot that afforded a great western sky view. While on the phone, this Marion police car rolled up behind a truck just in front of me. At first I thought it was a SWAT attack but apparently the pull over was for a traffic violation. The real One Adam 12 crime was Venus not being seen during this transit from here. I guess I will have to instruct the future great grandchildren to view it in 2117.
Posted by 42N at 9:22 PM 1 comment:

The sculpture, Lone Sailor stands outside of the Sullivan Brothers Iowa Veterans Museum in Waterloo, Iowa (above.) I saw this bronze last weekend during Memorial Day. It reminded me of the same statue (below) that I discovered in Norfolk, Virginia three years ago which overlooks the Iowa class battleship, USS Wisconsin.

The naval connection between Waterloo and the sea have been many for a landlocked state in the middle of North America. But the main reason is in memorial for five brothers who all served on the same light cruiser during World War II. The USS Juneau was sunk during a Pacific battle. All five Sullivan brothers from Waterloo died in that action. Their story can be found here.

About a dozen Lone Sailors can be found throughout the US - see list here.
Posted by 42N at 9:47 PM 2 comments: