Montana Mooses - Who You Look'n At? 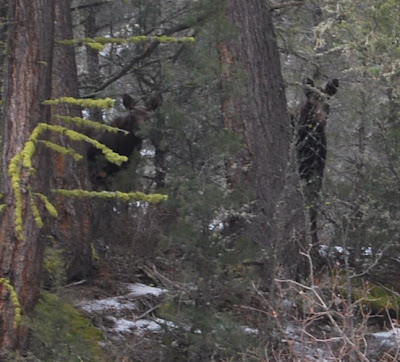 Driving through part of the Helena National Forest just east of Townsend, Montana two weeks ago on Route US 12 yielded a few surprises. One was a change from no snow to moderate snow on the ground, probably because of the protective forest canopy. The second surprise was the lack of any cars - maybe because its out of the way, late February and the middle of the week. But the third surprise was the best.

What appeared along the side of the road about 30 feet from the vehicle were two large creatures looking for food by a creek. I thought bears at first glance but these two were waaaay too tall. Then I recognized them as moose without antlers. As the 42N team sped by I decided to stop and reverse up the inclined road for a better look at these north woods animals. A 42N team member got out and began to take photos with my camera. The moose then scaled an icy face rock cliff like it was no big deal and hid behind some trees.

My turn with the camera came next. Without much of a telephoto lens I aimed it at the tall chocolate colored creatures now about 60 feet away. They just stood under the cover of the pine trees and watched us. I finished taking some photos and returned to the vehicle.

It occurred to us later that if these two mooses are females or juvenile males the big bull might have been around. That would have been a big surprise to either see the bull or worse, have it charge us. Goes to show us that we were out of our midwestern element. Know that.
Posted by 42N at 11:02 PM 1 comment: 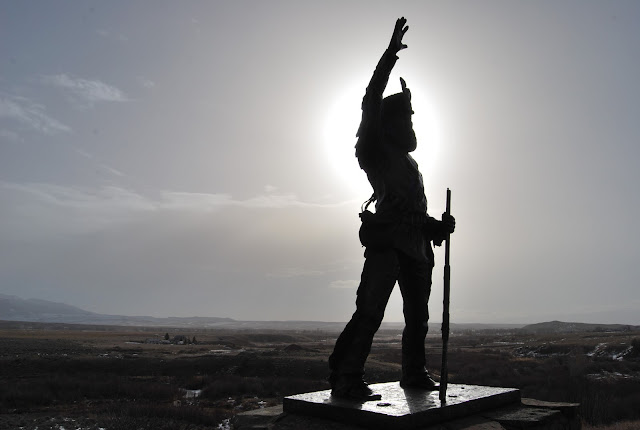 Just north of the tiny town of Wilsall, Montana is a sculpture dedicated to the region's European fur trappers, traders, and trail guides. In 2006, local artist Gary Kerby created this seven foot tall sculpture. Local school children named the work, "Thunder Jack" in the spirit of the local mountain men whose era is generally defined from 1805 to 1835 for this Montana region. My photo was taken mid-morning on February 16th. Note the lack of snow as the region had experienced four days of unseasonal warm temperatures. 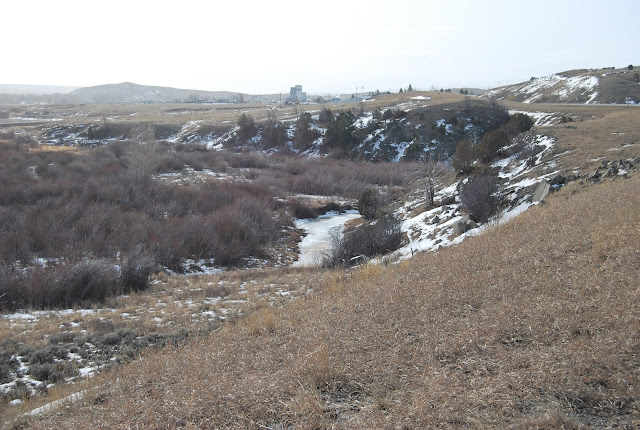 Just below Thunder Jack is the Shields River. Named by Captain William Clark after John Shields, a member of the Lewis & Clark expedition, the river flows into the Yellowstone River to the south. At that junction, the Corps of Discovery guided by Sacajawea, the Shoshone women camped on their return journey from the Pacific. Much later in the 1860s the river valley served as an extension to the Bozeman trail connecting Fort Laramie, Wyoming to the gold fields at Virginia City, Montana. Emigrant wagon trains were guided through this valley using scouts and sometimes old mountain men. Know that.
Posted by 42N at 10:04 AM 2 comments:

A Gathering of Presidents at Mt. Rushmore 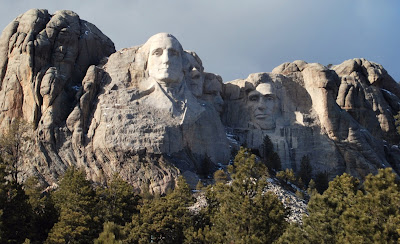 Off season at Mt. Rushmore can yield big results. Unseasonably warm temperatures 10 days ago melted most of the snow around the far western South Dakota landmark. More importantly vehicle traffic was all but gone at the park leaving the 42N crew time to observe the heads of Washington, Jefferson, T. Roosevelt and Lincoln. Site management still opted for full price to park the car and walk through a nearly deserted visitor center. We opted not to waste the cash as the faces can be clearly seen from a variety of locations on the road. At this time of year when almost no one is around you can stop the car at will and take in the scenery. 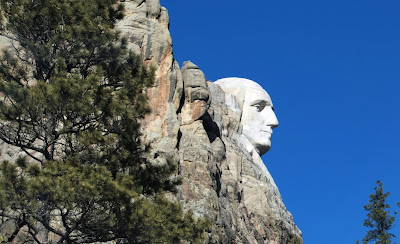 Continuing around the mountain is the chance to see the side view of the sculpture. Near the mountain’s west base is a parking area where the profile of Washington alone can be clearly seen. Again the 42N crew were the only people at the site. 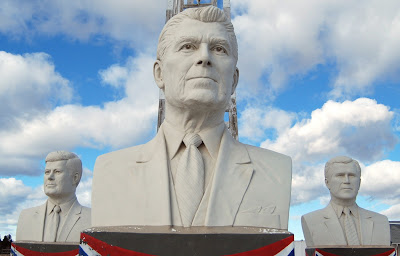 On the eastern approach to Mt. Rushmore is a convenience store/gas station. Next to it is this display of three more U.S. Presidents; Kennedy, Reagan, and G.W. Bush. Made of plaster, concrete or something else these three busts stare in the same direction as their famous predecessors – although at a much smaller scale. Perhaps they serve as potential additions to the famous carving. Or perhaps it was someone’s idea to honor all the Presidents as we do on this Presidents Day. Know that.
Posted by 42N at 8:39 AM 2 comments: 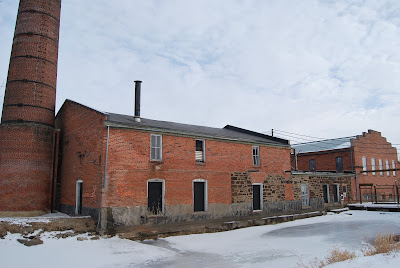 The Millstream in Iowa's historic Amana is pretty much frozen during this portion of the winter. A routing of a water supply from the Iowa River feeds the man-made stream that flows left to right in this photo. Back in the day the stream provided power to grind grain for the Amana Colonies.

A careful study of the exterior of these buildings shows several additions and repairs made over the years - including damage from high winds which toppled the tops of several nearby brick buildings. All have been repaired.

The villages of Amana is Iowa's largest tourist destination which features a look at how communal living worked for German immigrants in the 1800s and how it was transformed in the early 1900s. Know that.
Posted by 42N at 9:47 AM 2 comments: 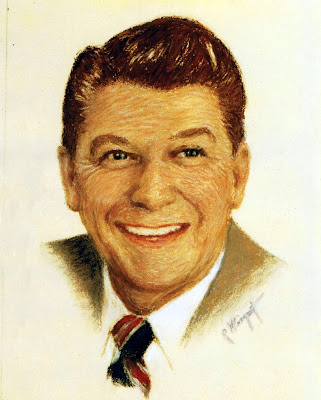 A few years ago in a box of miscellaneous stuff purchased from an auction in Independence, Iowa there was an envelope containing an advertising agency's artwork for the city of Dixon, Illinois - a boyhood home of Ronald Reagan. In the material were Polaroid test photos (to determine exposure and aperture) used to copy original artwork for some project. This was a common practice before today's digital composition and publishing techniques.

In this collection was an instant photo of an illustration of Ronald Reagan, the 40th President of the United States drawn by P. Wingart (or Wingert.) On today's occasion of President Reagan's 100th birthday it is time to share the artist's work.

Many people around 42N country know that Reagan got his entertainment start on Davenport's WOC radio and later on Des Moines' WHO radio as an announcer. One of his first assignments at WOC in the early 1930s was to cover a University of Iowa football game in Iowa City by doing color commentary. Having played the game as a student at Illinois' Eureka College, Reagan knew what the players were experiencing and called it as such. WOC program director Pete MacArthur was so impressed by the way Reagan handled the description of game that he told the play-by-play announcer to "let the kid finish the game" during the third quarter of that Iowa game. Reagan completed the play-by-play for that broadcast and three more Iowa games as a sports announcer. In his the own words, "the kid was overjoyed." Happy birthday Ronald Reagan. Know that.
Posted by 42N at 3:48 PM 2 comments: