Listen To What the Man Said in Frytown, Iowa 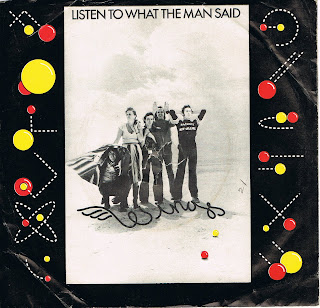 To complete the trifecta of recent Beatle-related finds in 42N country is this 1975 single, Listen To What the Man Said from Wings. Found today is this 45 rpm single with its original picture sleeve at an auction in Frytown, Iowa (latitude 41.57N, longitude 91.73W.) While the record is in great condition the sleeve is punctured through the center.
The single is from the group's 1975 album, Venus and Mars, the followup work to the landmark Band on the Run album. On July 19, 1975 Listen To What the Man Said achieved number 1 on the (US) Billboard Hot 100 chart. Also in 1975, Wings begin playing concerts in Australia in anticipation of their upcoming 1976 world tour. That year McCartney played several locations in the US marking his return to American venue concerts since performing at Candlestick Park with the Beatles a decade earlier. Watch Paul and Wings sing Listen To What the Man Said at the Seattle King Dome here.
Sometimes the search for whatever you seek (like a record or ancestral connection or a job) contains long voids. Sometimes your search brings multiple successes and in quick succession. Within the past 48 hours I have found three Beatle-related items, actually four but did not report the fourth (a Mary Wells song sheet) due to condition issues. The wonder of it all. Know that.
Posted by 42N at 8:36 PM No comments: 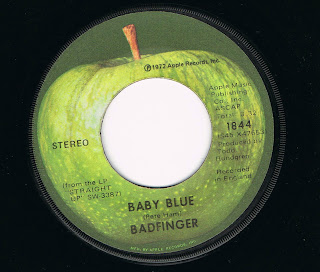 Another Apple 45 find yesterday. This time it was Badfinger's Baby Blue, composed and sung by band member and lead singer Pete Ham. In its day the recording was the group's last top 20 hit and the second from last single release for the band. Badfinger was one of the Beatles hand picked groups to record on the Apple label soon after the record company was launched in 1968. Apple catalog 1844 was recorded in England, produced by Todd Rundgren and issued in the US in March 1972. This particular record did not have a sleeve and is slightly warped but plays well for a 38-year old piece of vinyl - all for 48 cents.

Today I had still another Apple find in hand -- and it was another Badfinger single of all things, No Matter What. The particular record was well worn and the label was heavily scratched so I didn't purchase it. Got to draw the line somewhere. Know that.
Posted by 42N at 9:49 AM No comments:

The Hunt For Apple 8-Track Stereo 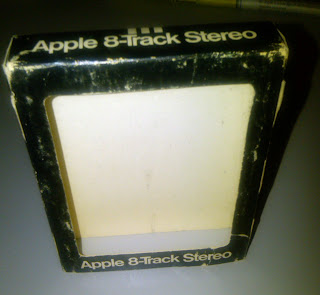 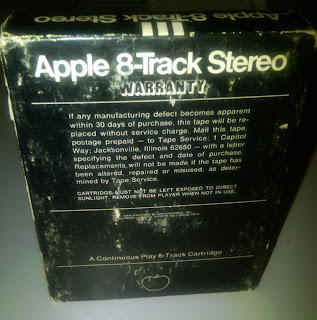 What is more rare than Beatles records on vinyl? Try finding mint condition, sealed Beatles recordings distributed on 8-Track cartridges. Yes, the icon of the 1970s can often fetch a few dollars more than similar traditional vinyl.
Today in 42N country's Dubuque, Iowa a local thrift store provided this well worn 8-Track sleeve minus a cartridge. Oh there were other 8-Tracks present but no Beatle cartridges. Knowing that the packaging alone will increase in value from the 50 cents spent, I jammed a non-relevant 8-Track into the Apple container since the sleeve alone was not for sale. I chose the Beach Boys Endless Summer cartridge. The label says its equivalent to 2 8-Track cartridges.


The hunt for Beatle 8-Tracks continues with the knowledge that the market is increasing for 1970s music material coupled with the sheer novelty of the 8-Track format. Nothing like listening to a song, have it fade out at mid-tune, automatically click over to the next channel, fade-in and continue playing - a key selling point and the reason why the format did not survive. Know that.
Posted by 42N at 11:43 PM 1 comment: 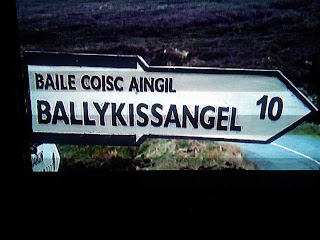 Its almost St. Patrick's Day and a pint is in order. Look no further than Fitzgerald's Pub in Ballykissangel, Ireland. From 1996 to 2001 the BBC broadcast a fictional drama of the same name featuring real-life Avoca, a small town located south of Dublin. Today the town is a magnet for BallyK fans to see the pub, bridge, and church prominently featured in the six seasons of the show. Sheep (and a few cut-out sheep) still graze in the area, but sadly Eamon Byrne no longer tends the flock and Brian Quigley no longer builds his BallyK pipe dreams. Know that.
Posted by 42N at 9:48 PM No comments: