A Bit of Bix 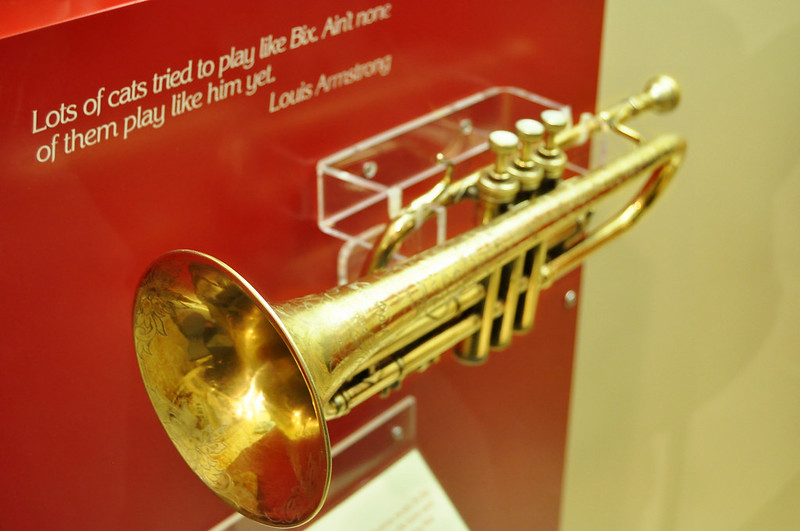 Bix Beiderbecke was a jazz trumpet player who played mostly in the 1920s. His cornet is on display at the Putnam Museum in Davenport, Iowa where Bix hailed from. As cool as that is, read the statement from trumpet legend Louis Armstrong just above Bix's cornet - can't get a better accolade than that.
Posted by 42N at 8:46 PM No comments: 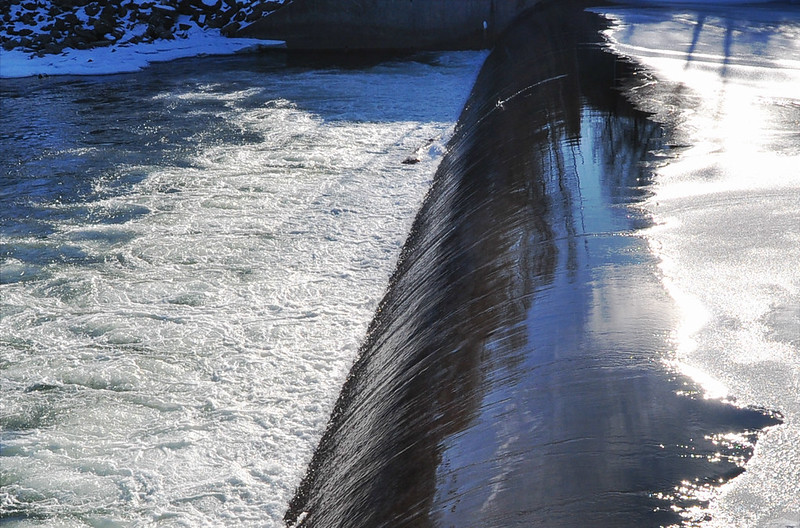 In Central City, Iowa the small town is bisected by the Wapsipinicon River. Once part of the town's electrical generation, a roller dam was constructed decades ago which serves to impound the waterway for a few miles upstream. During a late afternoon stop on an early February day the river at the dam is clear of ice and runs nearly transparent. In the Spring the river will turn brown from organic matter of the growing season. 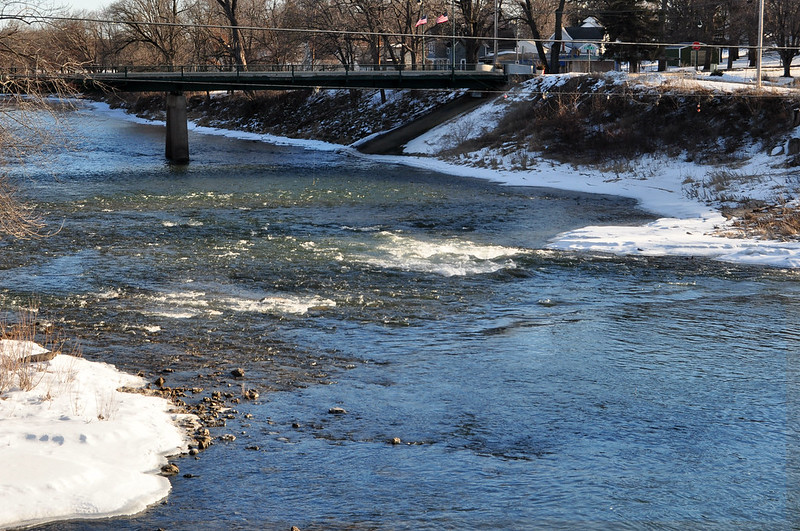 Just a few feet from the churn of the water over the dam, the river resumes its journey downstream. Since fish tend to collect at the base of the roller dam it is naturally a good spot to try your luck at angling. Look closely at the photo above to see fishing tackle entangled in the power line on the right hand portion of the ground just below the street.
Posted by 42N at 9:40 PM No comments: 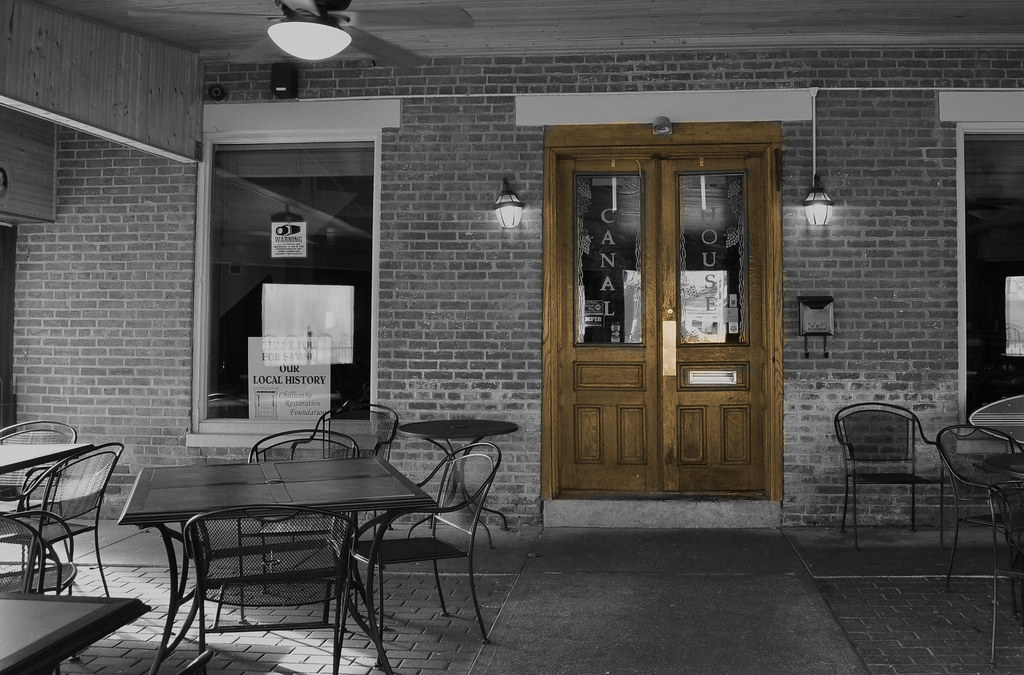 Found this BBQ place in Chillicothe, Ohio in October 2008. Liked it so much the 42N team went back a year later to the Old Canal Smoke House. A gap in time, an unconformity if you will then occurred. Returning on New Years day 2016, the team arrived yet again but at a different time of day and from the opposite direction. While the restaurant was closed early in the morning a few outward changes had occurred since we were last there seven years ago. 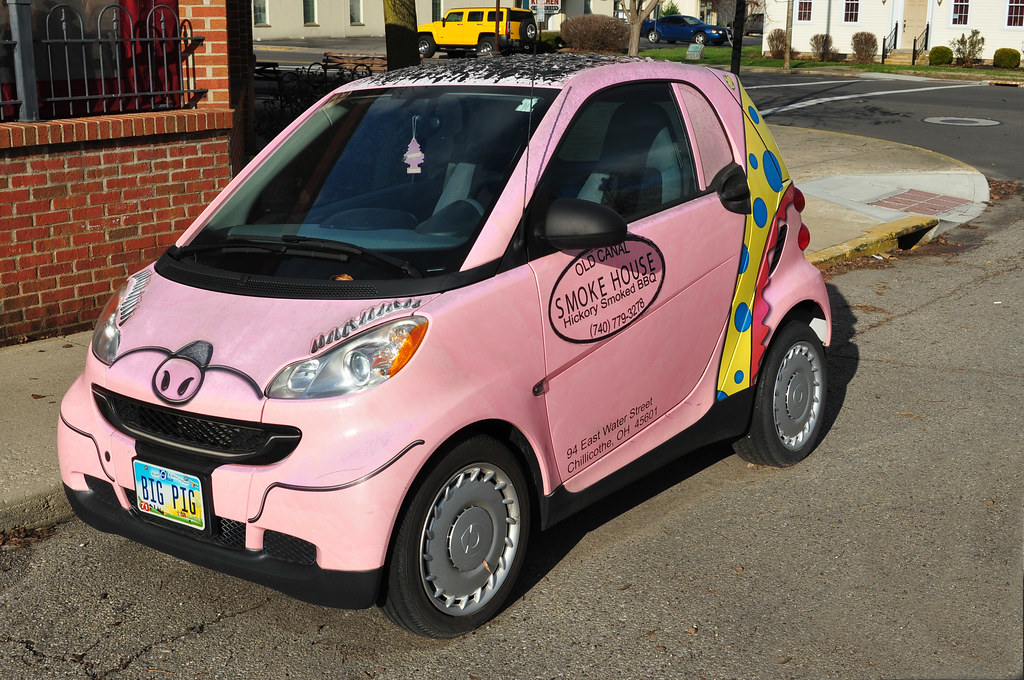 A bright pink pig car complete with Old Canal Smoke House advertising parked on the side street adjacent to East Water Street. Ok I get it - pig - pork - cute. 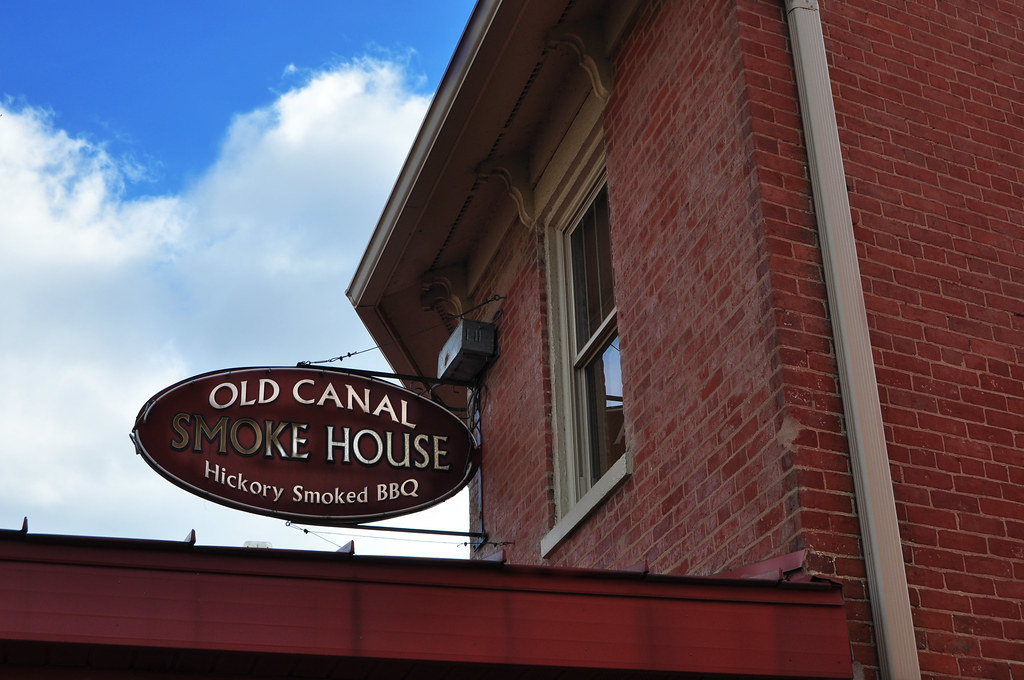 Besides the ribs, building and front door, I seem to remember this sign from the late Aughts. On both nights outward bound seven and eight years ago the Saturday night arrival guaranteed a full house, great Big Ten football on huge televisions and of course regionally famous BBQ. Check out the historic downtown if you come here to sample the ribs. Also there's a national or state park nearby that is focused on the ultimately cool Ohio River Mound Builders who were active in this area way back when.
Posted by 42N at 10:10 PM No comments:

Topping off the Tank at 2000 Gallons 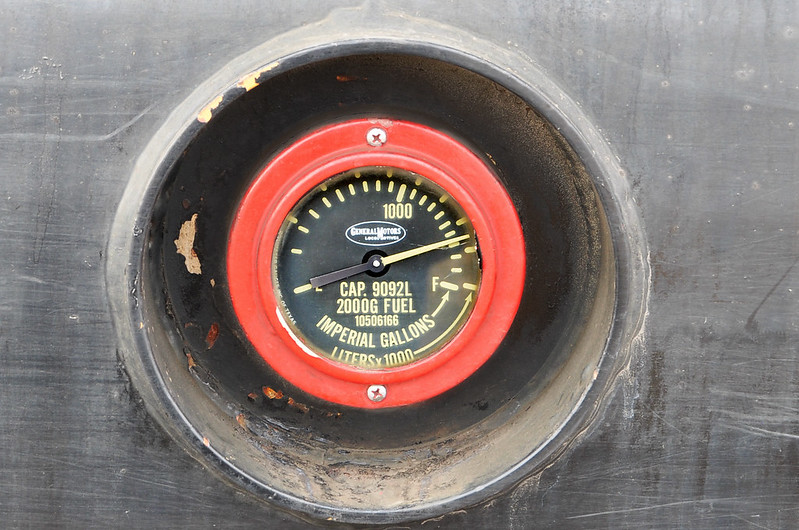 A fuel gauge on a General Electric locomotive tops off at 2,000 imperial gallons which equals about 2,400 US gallons. Diesel is the fuel of choice for these massive machines. On this day two color contrasting locomotives are joined together on a tracks in Clinton, Iowa, just feet from the Mississippi River. The blue color Dakota, Minnesota & Eastern (DME) engine, called the "City of Wall" was built in 1966 per railpictures.net. The red Canadian Pacific locomotive also travels the Midwest from the US to Canada according to that website's tracking of CP 3081. 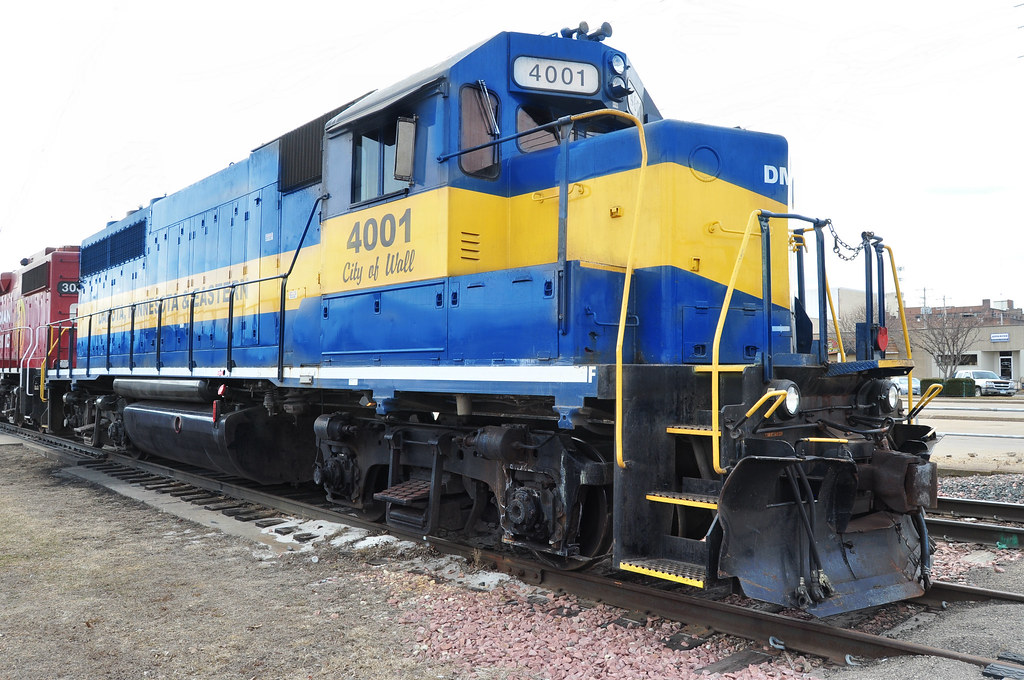 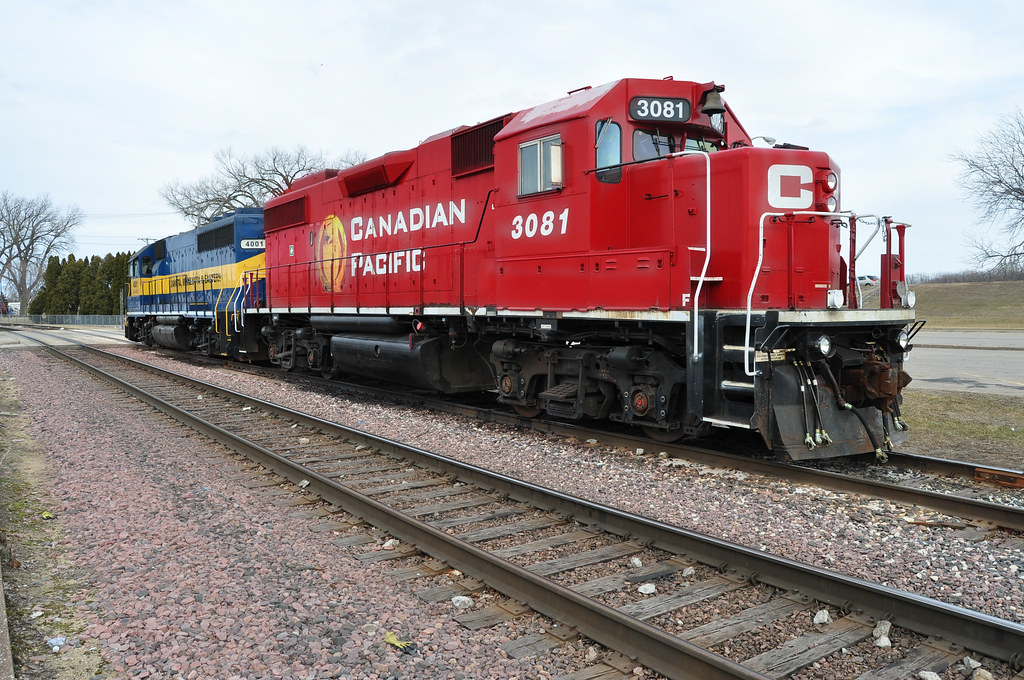 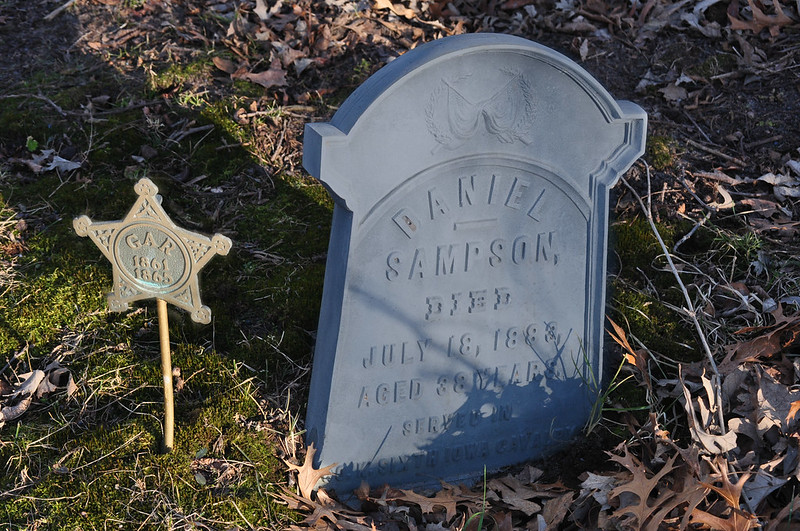 Old cemeteries are fascinating – especially small country cemeteries. Such is the case for Hazel Knoll Cemetery in Jones County, Iowa. The bulk of this property is a hillside dotted with various stone monuments and traditional grave markers. There are several Civil War era soldiers buried here. However one grave stands out. Near the top of the hill and off to the side is a metal grave marker for soldier Daniel Sampson. His marker states that he was part of the Iowa 6th Cavalry,Company K. Internet research turned up that Daniel enlisted in the Army on Oct. 21, 1862. This regiment was mustered out at Sioux City. Nov. 17, 1865. He was listed as a wagoner.
Posted by 42N at 9:44 PM No comments: 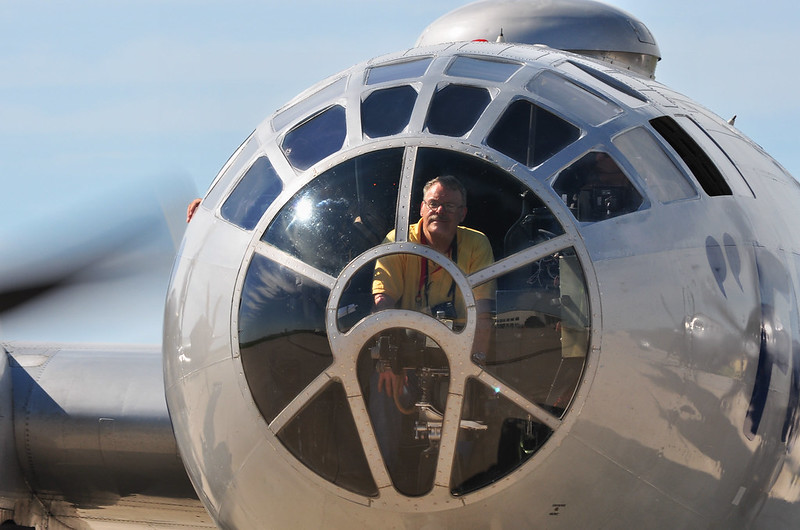 Where would you ride if given a chance inside a World War II B-29? In the unique nose seat of course. As an inspiration for Star Wars' Millennium Falcon window, the highly prized seat often rents for thousands of dollars for a 30 minute flight. While the price is a bit steep, it is an opportunity to have the front window B-29 ride experience which is probably like no other.
﻿ 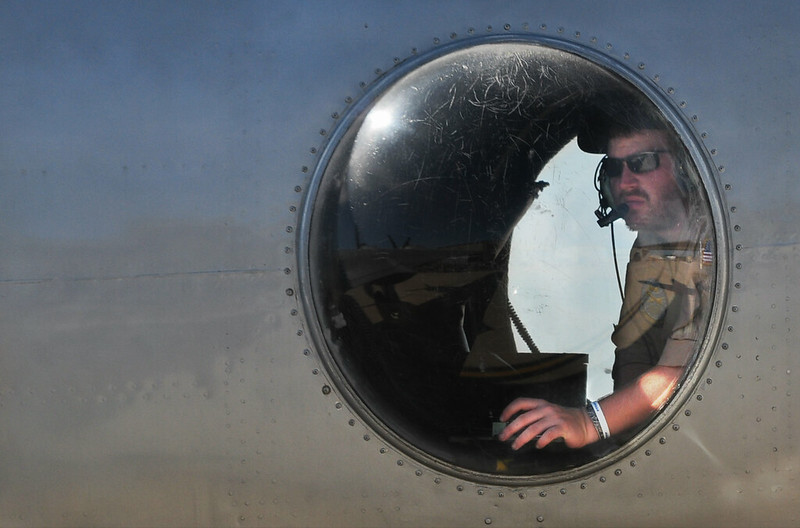 Another fantastic place to sightsee is from the waist gunner position on the B-29. From this location you can see much of the plane's wing, two engines and the world below.
Posted by 42N at 10:07 PM No comments: