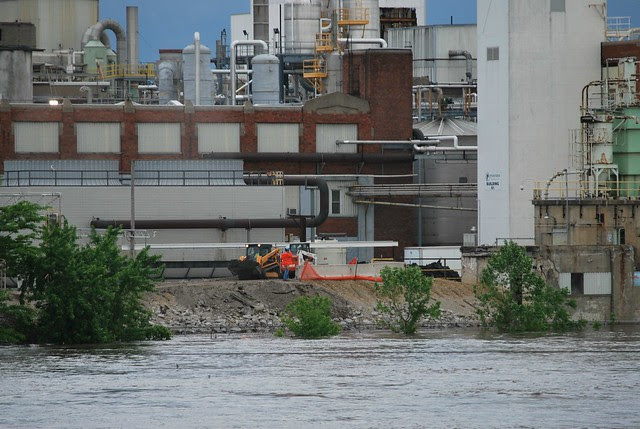 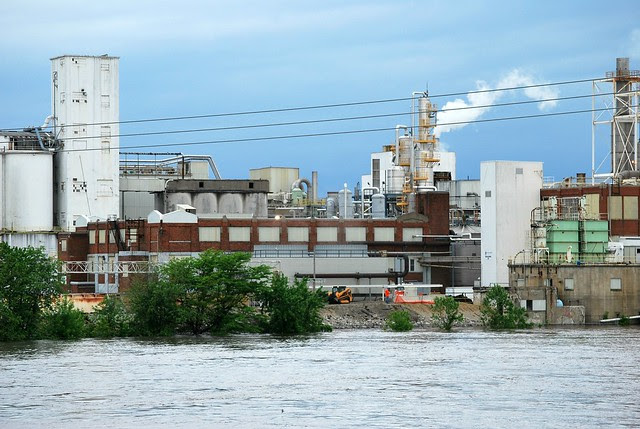 Almost five years to the week of the devastating flood of 2008, the Cedar is expected to reach 19.5 feet through downtown. The 2008 historic flood crested at 31 feet. City officials say that at 12 feet the river begins to reach streets and back up sewers. 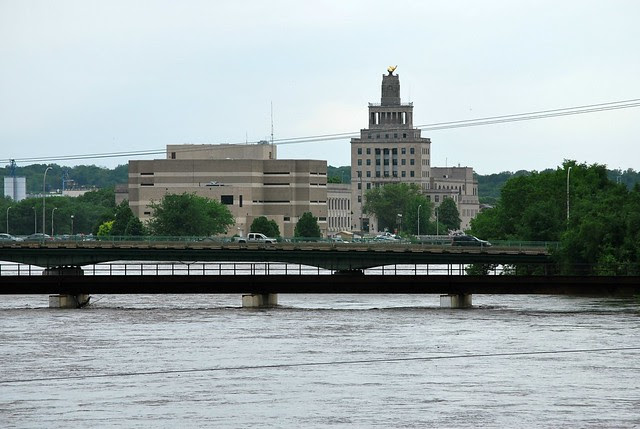 From the same vantage point as the top two photos, you can see two bridges in the foreground. Behind the bridges is May's Island where the city jail sits along with the Veteran's Memorial Building. Vet's was the site of city government until the 2008 flood. Flood preparations are being executed in and around this area as the river continues to rise and the rains continue to fall.
Posted by 42N at 8:40 AM 1 comment: 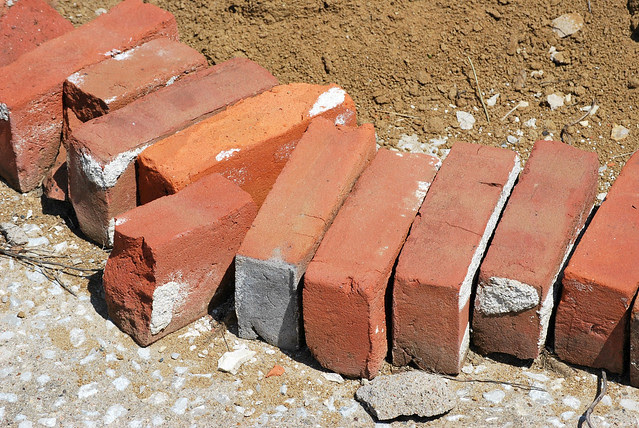 Repurposing resource material is a good idea where possible. The people of Amana, Iowa repurpose all sorts of material, much of it being quite old by Iowa standards. A recent example of reuse in that community is the salvaging of bricks from a barn. The structure is either undergoing retrofitting or is being stripped of still useful material. Either way the long ago and locally produced bricks are being cleaned and stacked as they await their next supportive role.
Posted by 42N at 10:09 AM No comments: 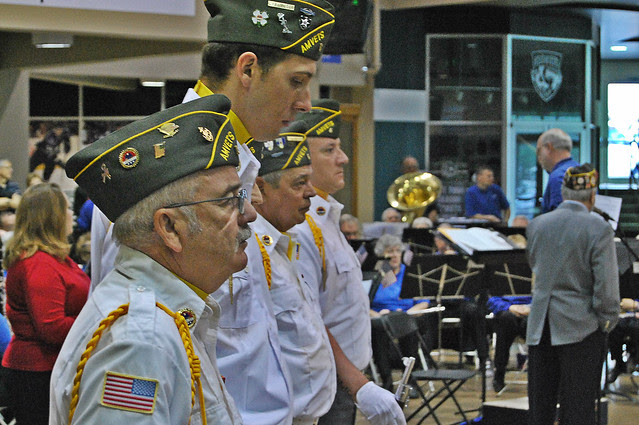 I have never attended a Memorial Day ceremony. In the past the 42N team has traversed cemeteries and parks on Memorial Day to see flags and people but never actually attended a live event. That changed today. Cedar Rapids' Metro Area Veterans Council Memorial Day Event was conducted at the ice arena because of rain in the forecast. Inside the lobby were hundreds of people, many of them elderly, dressed in attire identifying themselves as U.S. veterans. 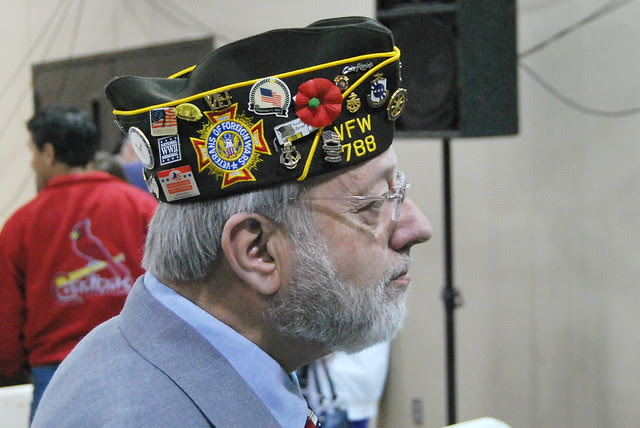 Master of Ceremonies, Cary J. Hahn (news director at radio station KMRY) and a U.S. Navy veteran spoke about the occasion and introduced speakers. The one hour event was broadcast live on 1450 KMRY. 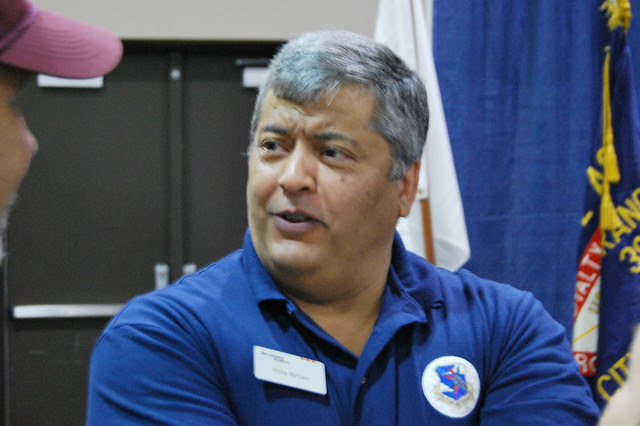 The guest speaker was U.S. Air Force Master Sergeant Mike Brown (retired.) Mike was a certified B-52 bombing and navigation systems technician and served in Desert Storm with the 806th Expeditionary Bombing Wing. He spoke of the service of his father, the loss of his friends and colleagues during a B-52 explosion and the war-readiness condition his units maintained during the height of the cold war with the Soviets. 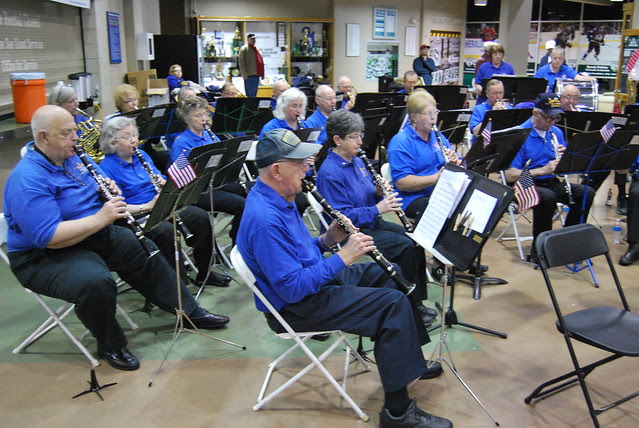 The New Horizons Band played Sousa marches and other patriotic music before during and after the ceremonies. Poignant portions of the ceremony included playing each service's theme. Mr. Hahn asked members of the audience to stand as they heard their service music. Veterans of the Navy stood when 'Anchors Away' was played, then the Air Force, Army and Marines stood in succession upon hearing their songs. Hahn recited a portion of the poem, 'In Flanders Fields' as the band played. The reading brought tears to many people. 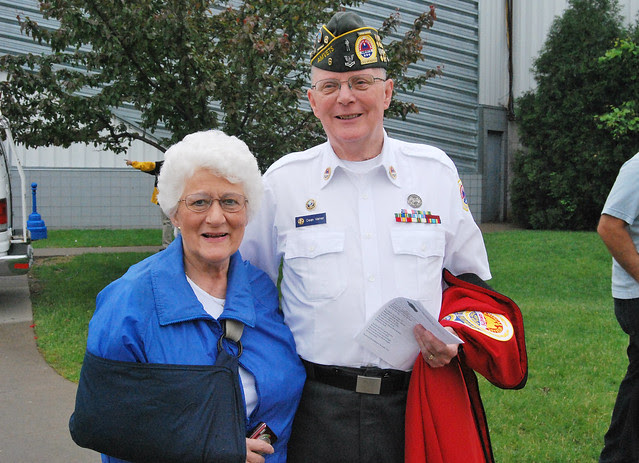 Today's ceremony included a volley salute from the Marine Corps League, who stepped outside the door to fire their weapons before taps was played. Many audience members consisted of veterans, their spouses and children. While this group represented each branch of service, missing were various segments of ordinary citizens. While the few hundred person turnout didn't phase the vets the most important issue was remembering those who did serve and lost their lives so that freedom and liberty can remain cornerstones of our lives.
Posted by 42N at 8:40 PM 1 comment: 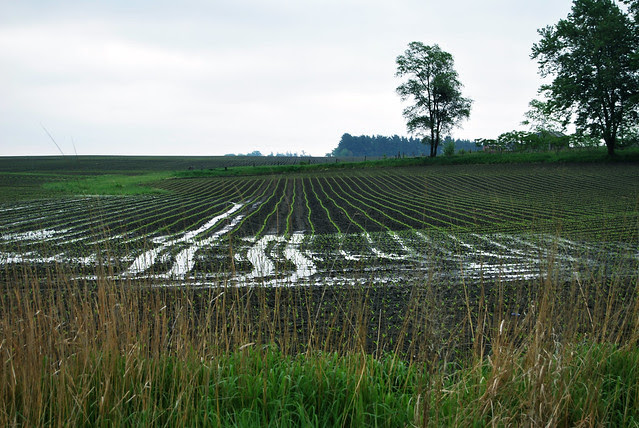 Iowa's 2013 corn planting is a lively topic on the radio this spring. Last season we experienced state-wide drought that persisted through most of the year. Since February moisture has fallen steadily and erased the drought for two-thirds of the state but has shifted concerns to flooding.

Farmers this spring have had short windows of opportunities to get pasture crops, corn and soybeans in the ground. This particular field is located just west of Mount Vernon, Iowa on the Lincoln Highway (old Hwy 30) and is typical of many acres found in eastern Iowa. 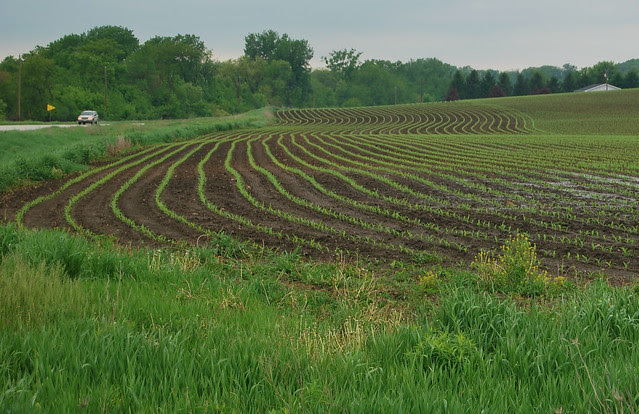 This view looks west of the top photo. The Lincoln Highway is on the left. Everything is green and growing but standing water or rising creeks are a concern. Of course time will tell whether this crop matures on time and is harvested later in the fall. I can't imagine being a farmer and having to deal with weather swings like this year to year.
Posted by 42N at 8:27 PM 1 comment: 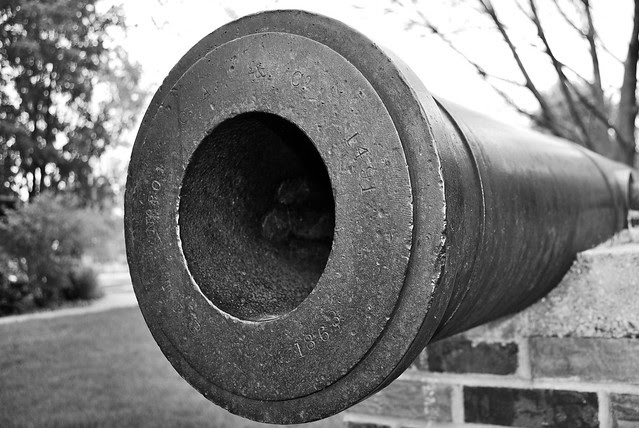 Guttenberg, Iowa is a scenic small town located in northeast Iowa along the Mississippi River. Among the many sites of the historic town is the relatively new veteran's memorial and cannon display. Yesterday as the 42N team took some of the scenic highways to and from Iowa's driftless area, a stop at Lock & Dam No. 10 produced an opportunity to perform a quick photo study of a Civil War era cannon.

From the markings on the cannon I discovered this is a 24-pounder flank howitzer. The foundry that made this cannon in South Boston, Mass. produced 577 of these heavy fellows, of which some 269 survive. This particular cannon was produced in 1863. 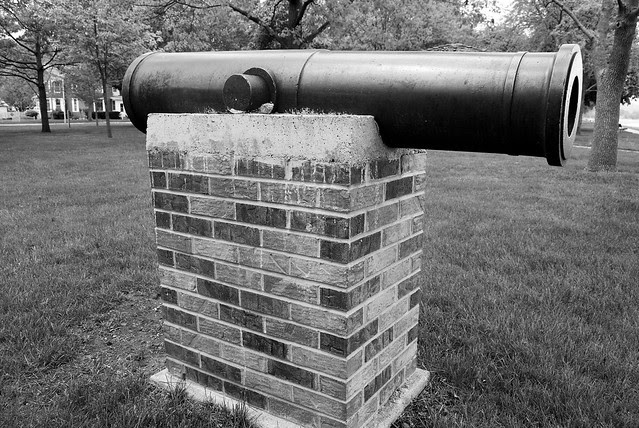 Guttenberg's old time cannon is situated perpendicular to the river and is aimed at Wisconsin. But don't worry Badger fans. Given the altitude of the barrel there is no chance that even a fully charged cannon ball would fly past the state line located at mid-river. Since this is an inactive cannon (for display only as part of the veteran's memorial) the purpose of the hardware is to remind people of the epic struggle fought by area soldiers and sailors a hundred and fifty years ago.
Posted by 42N at 9:41 PM 1 comment: 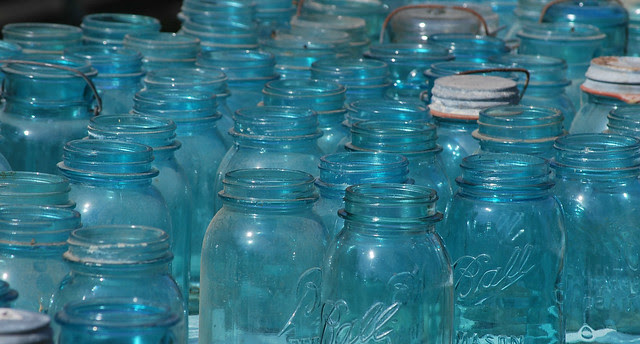 Way, way before Red Solo Cups catapulted as the de facto drinking container for casual get-togethers, the venerable Mason Ball Jars were all the rage. Guess what? Ball jars are still in high demand as drinking glasses. Blue tinted jars, from the height of canning days, are especially sought after for all occasions. Forty-some of these jars, sold at an Amana, Iowa flea market went to a bride-to-be for her upcoming pre-wedding festivities. What is old is something new. And what is something blue is apparently wedding appropriate - time to proceed to party.
Posted by 42N at 8:41 PM No comments: 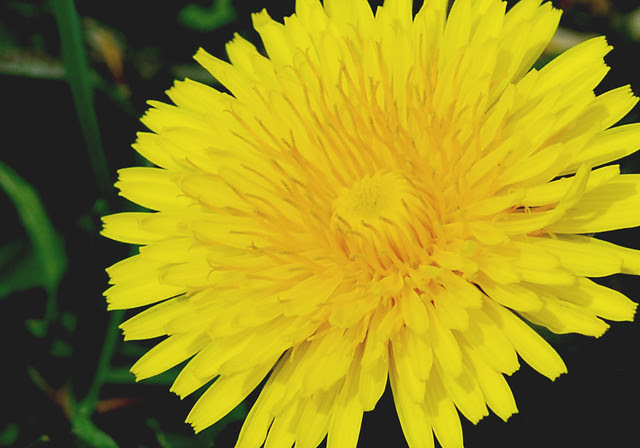 Kids love them. Many lawn owners not so much. Dandelions, however provide visual confirmation in many parts of these mid northern latitudes that spring is really here. Mow 'em, spray 'em, pick 'em, chomp on 'em, squeeze 'em into wine or let them be. You decide but soon they will turn into white globes and spread their range closer to a lawn near you.
Posted by 42N at 11:50 AM 1 comment: 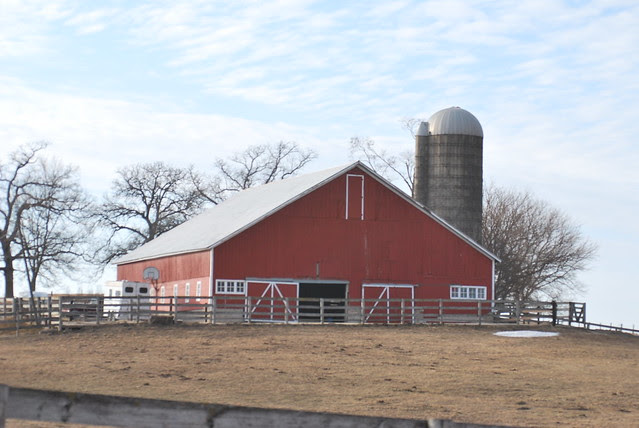 This horse barn is located north of the Lincoln Highway between Cedar Rapids and Mount Vernon, Iowa. I photographed the barn in February as it stood out from the bleak browns of winter. Perhaps I should return and get a Spring look. 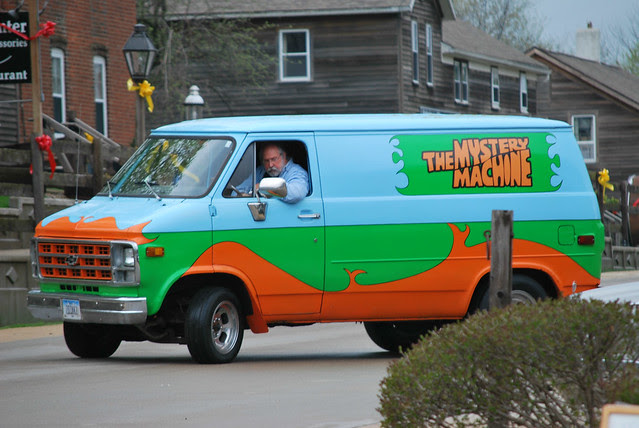 Zoinks! Scooby Doo's Mystery Machine was spotted on the streets of Amana last weekend. The driver appears not to be Shaggy and would have gotten away with it, too, if it hadn't been for those meddling kids!
Posted by 42N at 9:36 AM 1 comment: 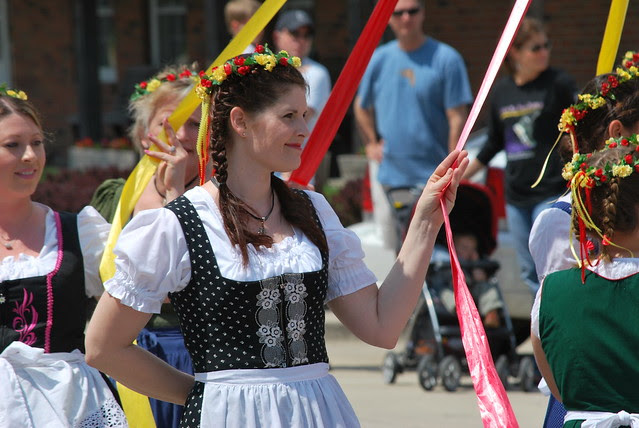 A tale of two days. Yesterday's opening Maifest activities in Amana, Iowa were filled with clouds and hard rain during the late afternoon. Today's fog gave way to bright sunshine which brought people out to see the celebration of May including several performances by the Maipole dancers. See photos from PART 1 here. 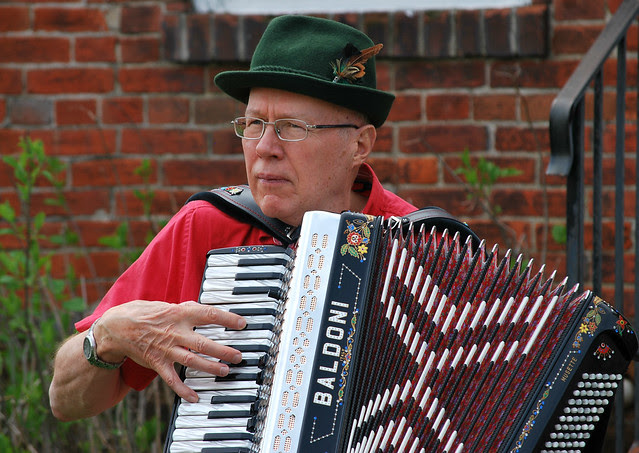 Traditional German music played on an accordion entertained visitors throughout Amana this weekend. 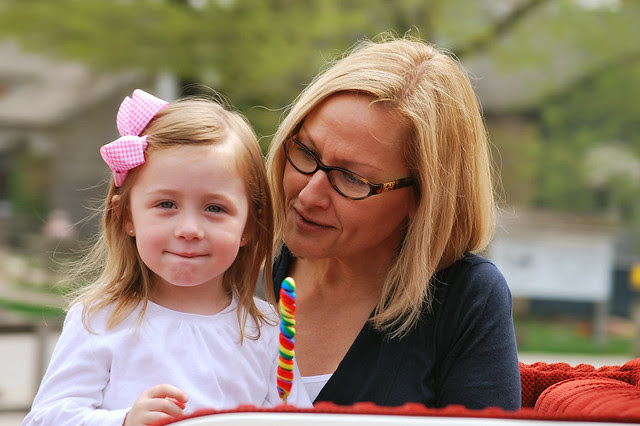 Nothing like 70 degree weather to bring out families to taste Maifest's sweets. 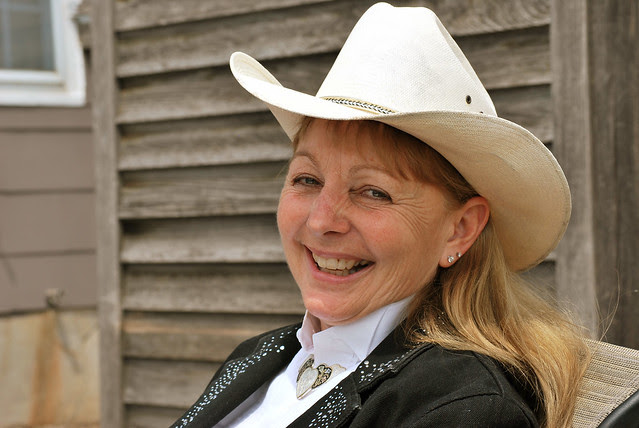 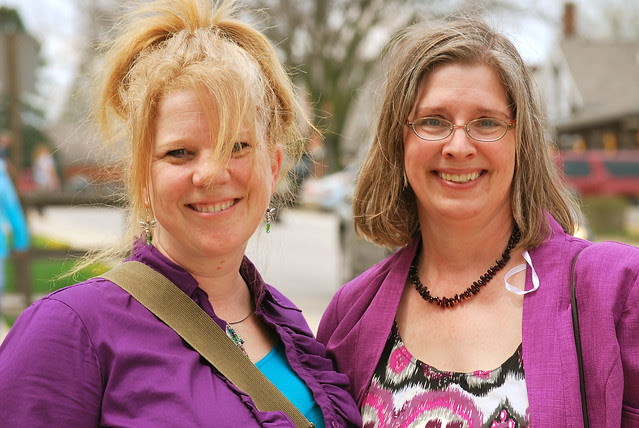 Purple is IN for these two visitors. Bus loads of people from around the area came to experience the sites, sounds and smells of Maifest. The furthest bus load of travelers arrived from Corpus Christi, Texas this morning to see several sites in the Midwest. During their trip the Texans were treated to several inches of snow in central Iowa during the past few days.
Posted by 42N at 10:22 PM No comments: 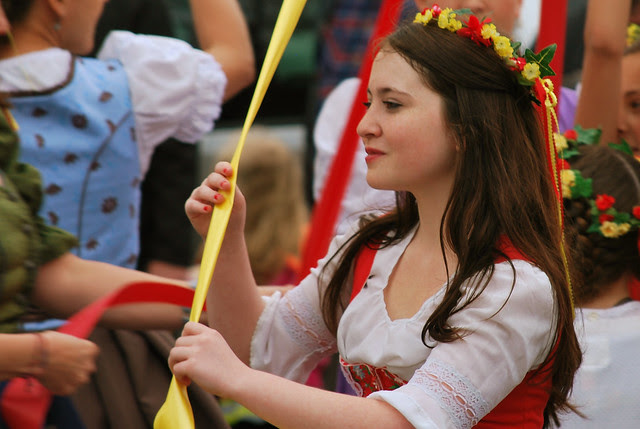 Maifest, the annual celebration of Spring was held rain or shine (we had both) in the German heritage village of Amana, Iowa today. The highlight of the two day festival is the maipole dance which is performed several times throughout the two day event. Young women dressed in traditional costume dance and sing (in German) around two maipoles as hundreds of festival goers watch. Today bus loads of tourists from Iowa, Minnesota and Wisconsin were on hand to watch. Many people came to Amana after some events of the annual tulip festival in Pella, Iowa was cancelled due to snow received on Friday. 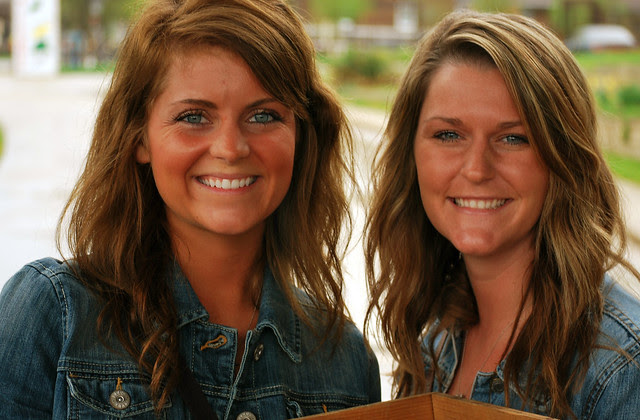 If you are not watching the maipole dancers most likely you are eating German food or shopping. These two antique shoppers found a Dewars Scotch wooden box that they plan to decorate. Inside the wooden crate were four blue glass mason jars. 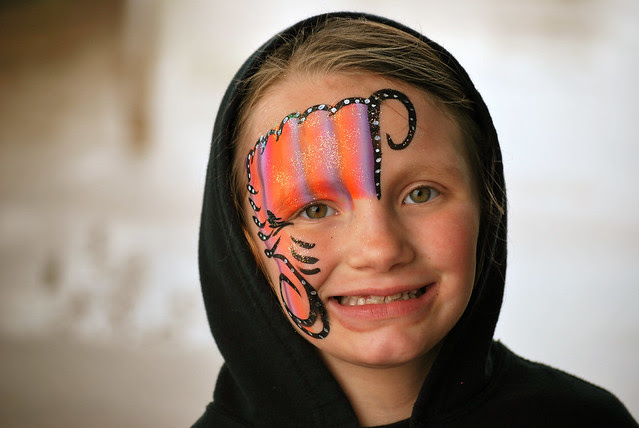 Face painting is always a hit with the young. This girl's face was a canvas for an intricate design. Her younger sister had already smeared half her face paint off and refused to be photographed. 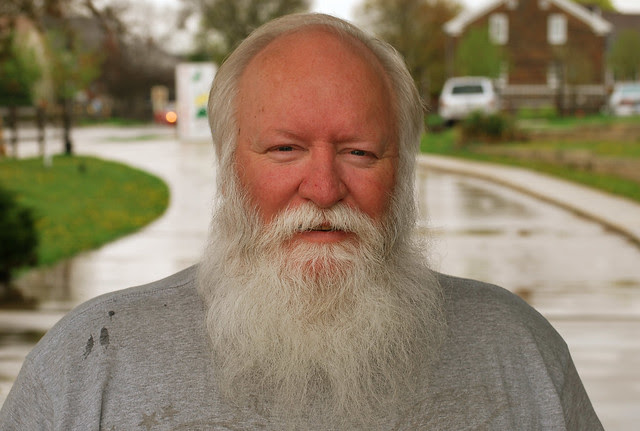 By the end of Saturday, Mr. Christmas came by to say hello. Actually his name is Dave. His white beard helps him to play Kris Kringle throughout eastern Iowa. Santa's presence helped to bring snow to western, central and northern Iowa yesterday but only rain to Maifest - this time.
Posted by 42N at 10:55 PM No comments: