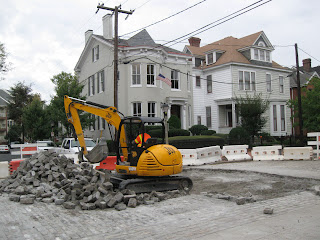 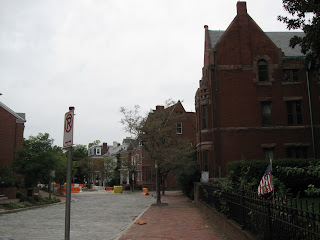 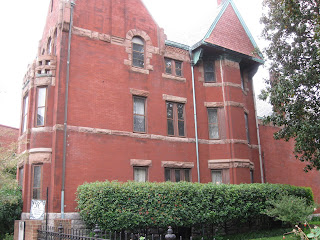 Fifes and Drums in Williamsburg, Virginia

Following this march the band drums for the Virginia militia while we see a demonstration of rifle shooting, more parade marching and the setting off of a cannon. All of this happens in conjunction with a visit by General George Washington on horseback. The general addresses the gathered crowd - many of whom are from England. Huzzah! Know that. 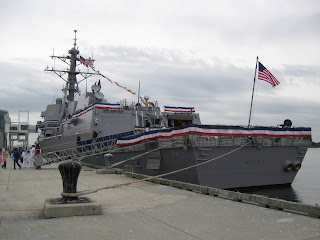 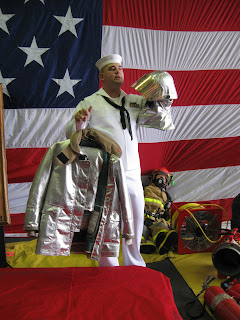 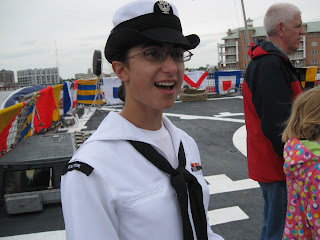 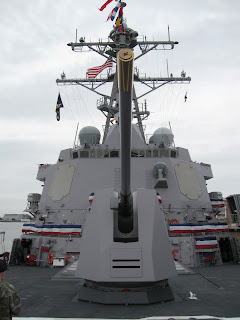 The Commander of the USS Nitze, CDR Richard Brawley, wished us well at the end of the tour. He is proud of his ship and his people. So is 42N. Know that.
Posted by 42N at 7:49 PM No comments: 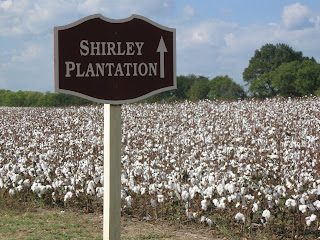 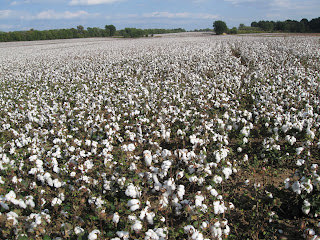 During Columbus Day week last year this Shirley Plantation cotton field was already picked and ready for transport. This year the snow-like field awaits the mechanical harvest which had to be just days away from the October 14th summer-like day.

Near Hopewell and Charles City, Virginia Shirley Plantation is open to the public for tours and events. Part of the ongoing revenue for the plantation is the cash crops like cotton and soybeans. Cotton in full bloom adds that dimension of authenticity when visiting the oldest plantation in Virginia (1613.) More on the Shirley Plantation at a later post. Know that.
Posted by 42N at 7:45 PM No comments:

The Haunting of Colonial Williamsburg 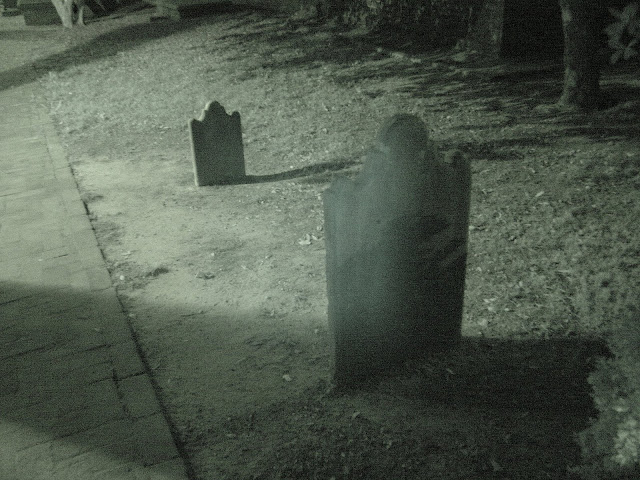 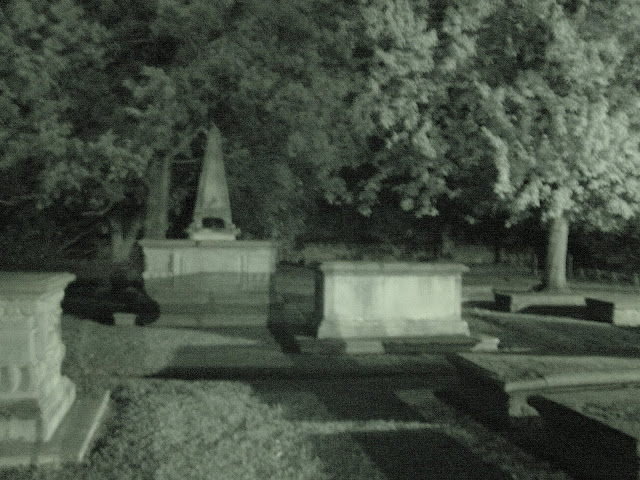 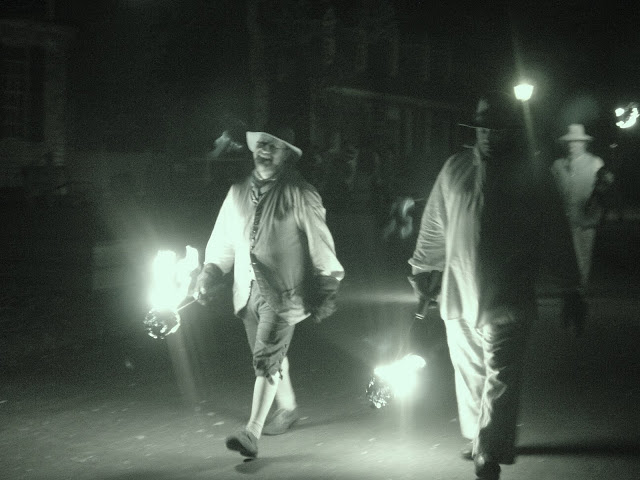 Ghost tours are a popular events at Colonial Williamsburg, Virginia especially in the fall when the conditions seem right to properly frame the stories. This week while the 42N blogger was in the 18th-century living-history park we heard two new reports of super natural sightings not part of the regular ghost tours in Colonial Williamsburg.

A Williamsburg worker told us that people can occasionally see small orb-shaped glowing clouds floating down the Duke of Gloucester Street at night. She described these clouds as the size of small children which move along the street and at times move from side to side in the street.

The second report came from a woman working the gift shop at the DeWitt Wallace Art Museum and Abby Aldrich Rockefeller Folk Art Museum. The woman told us about encounters when she worked in the nearby Celebrations shop (110 S Henry St.) In the basement after Celebrations closed she would tidy the place up and organize it for the next day. In the morning she and others would find items moved from where they were placed the night before. She also reports hearing footsteps after all people were out of the building. She claims that this is a male entity who is just messing with them and is doing no harm. Our visit to Celebrations yielded no brushes with ghosts but we did talk to the sales people.

This week during our night strolls on the streets of Colonial Williamsburg we encountered no mysterious vapors but did observe the ever popular ghost tours in progress. Coincidentally, the Bruton Parish Church, located on the Colonial Williamsburg property, conducted an evening music performance which allowed for its cemetery grounds to be visited at night - another place of many reported sightings.

One thing is for certain, the interest in ghosts especially at such a historic place like Williamsburg is a big draw for the property and privately guided groups. People enjoy hearing a good ghost story, getting scared and trying their luck in seeing or capturing a photo of a colonial spirit. Know that.
Posted by 42N at 9:31 AM 1 comment: 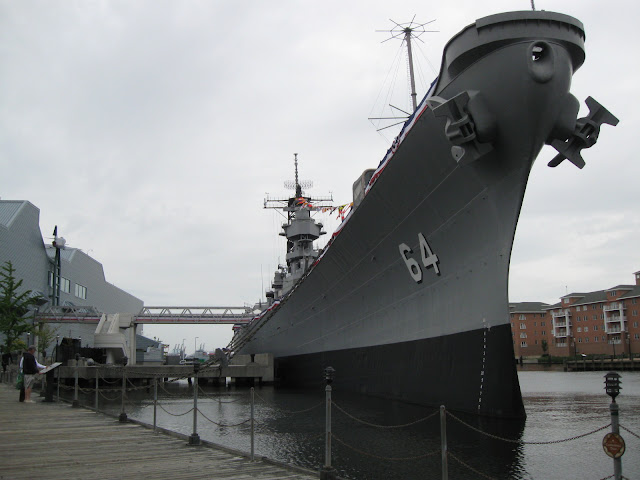 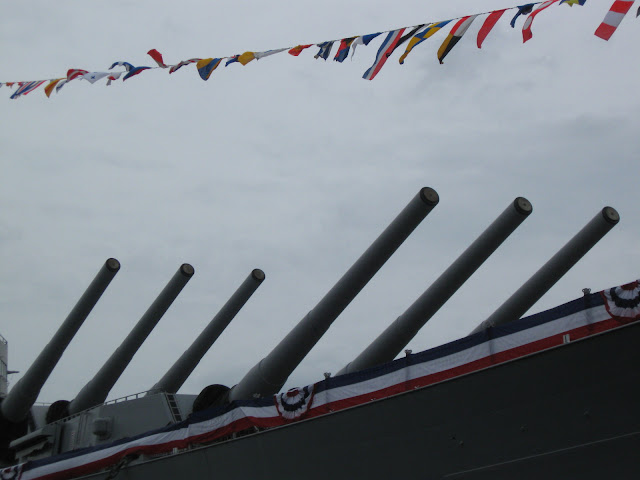 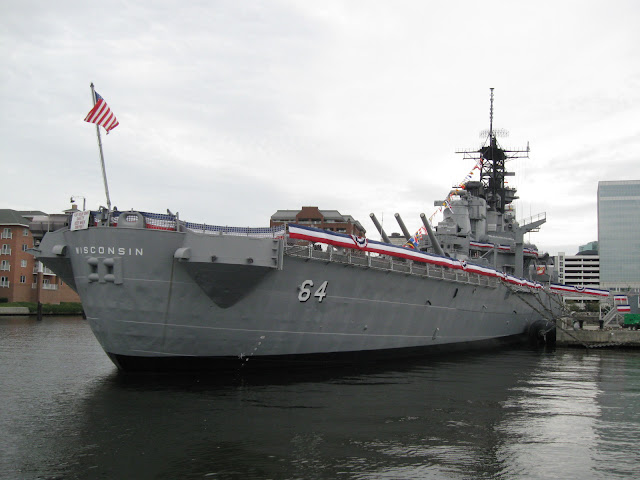 While the USS Wisconsin was closed to tours on this Monday, the ship is readily accessible along the Cannonball trail - the extended sidewalk that allows spectacular views of the warship. Take time to read the various information displays along the walkway. Statues and monuments to other Norfolk-based personnel who gave their lives in defense of our country are located along the path. Know that.
Posted by 42N at 5:14 PM No comments:

42N country stretches around the world - as you would expect. While previous posts here concentrate around 42N and 92W, its time to expand the coverage. A quick look around for other interesting places located on the 42N meridian starts pretty much near the prime meridian or the rose line - the first prime meridian.

Located at 42°55'41" N, 2°15'46" E is a church, castle and french town connected closely with the work of Henry Lincoln, Richard Leigh and others -- Rennes Le Chateau. What better place to tie in previous 42N posts with masonic and other related references. Indeed a mysterious place and a mysterious story - enough to inspire author Dan Brown with the creation of The Da Vinci Code and become a tourist spot for decades. Know that.
Posted by 42N at 9:39 PM No comments: 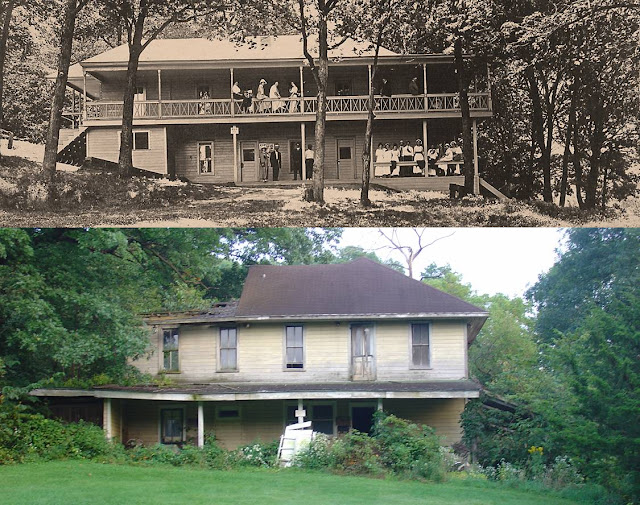 Ironically the knockout blow to the continuing existence of what was the Biderman Hotel is the very reason that brought people out to the site - the river.

In the late 1890s the Cedar Springs Hotel was built along the northern banks of the Cedar River, adjoining present day Palisades - Kepler State Park in eastern Iowa (42N country) near Cedar Rapids. By 1914 the property was sold to Adolph Biderman who turned the hotel and grounds into a major destination place. Adolph's granddaughter Pat Biderman is the present owner of the property. Pat says the hotel's registration book is filled with names from all over the world.

On a September 2009 tour of the property Pat explained how the Cedar River's historic flood in June 2008 put an end to any plans of saving the structure. She started the demolition process of the wooden building noting that the paperwork is more tedious than the eventual bulldozing of the structure. At present Pat has no plans to rebuild on the site.

The hotel was known by the names, the Cedar Springs Hotel, Upper Palisades Hotel and the Biderman Hotel. The image above shows the hotel in the 1930s with many people formally dressed and positioned on the hotel's two porches. The bottom photo was taken in early September. The second story porch was removed many years ago.

In its present condition it is hard to imagine that on certain Independence Day celebrations upwards to a thousand people would come on to the grounds for enjoying nature, fireworks, hotel dinners, and the company of others.
Much more information exists on the property and will be the subject of a later blog entry. Know that.
Posted by 42N at 11:14 PM No comments: 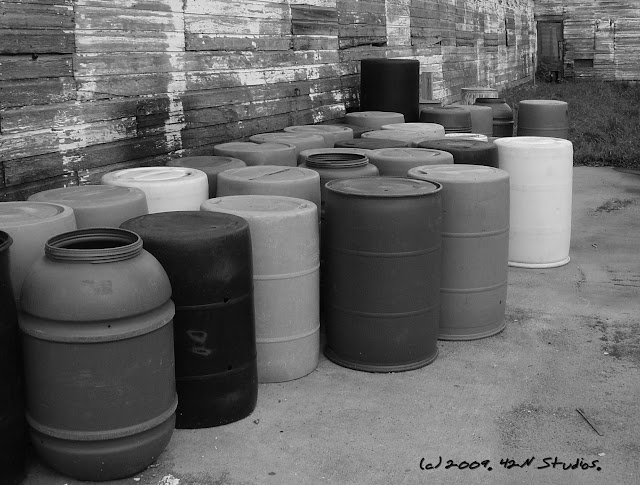 What's more fun than a barrel of monkeys? Maybe it's the Graduate's classic movie line about plastics that comes to mind. Otherwise, this storage area for plastic barrels make for a great black & white composition.

Long ago when I started took up photography with a friend, we concentrated on black & white imagery as it was the easiest way to process and print photos in his basement darkroom. Later, courses in college emphasized both the news value and the art of black & white photography.

Today with online photo editors and other powerful image software it is a snap to shoot, edit and publish. Still, composition is the key for basic good photography. Look for lines, contrast, and the moment to capture the IT image. Know that.
Posted by 42N at 12:08 PM 2 comments: