Along the famous Lincoln Highway in Belle Plaine, Iowa is a former gas station and motel once owned by George and Blanche Preston. Over the years they collected signage for gas stations, gas pumps, motor oils, gasoline, tires and other related motoring brands. Collectively the area of interest is called Petroliana.

George died in 1993 and his wife Blanche died in 1998. George appeared on the Tonight Show starring Johnny Carson during March 1990.

I don't know the status of these structures but the buildings are still mentioned in area tourism articles. Last summer Iowa's DOT posted signs along the original Lincoln Highway and its many re-configurations to guide modern motorists along America's first transcontinental road. If George was still alive I bet these new signs would find themselves among his collection. Know that.
Posted by 42N at 8:33 PM 3 comments: 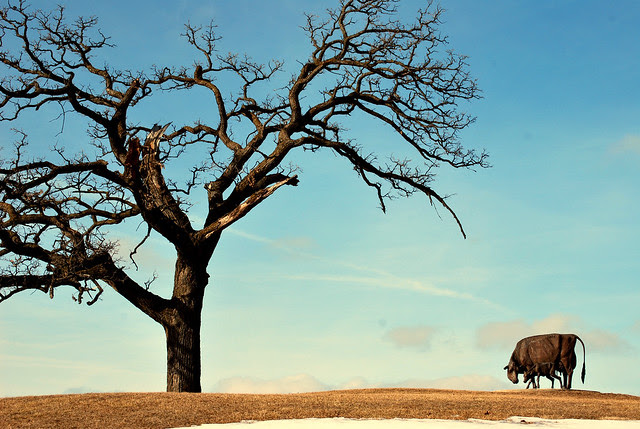 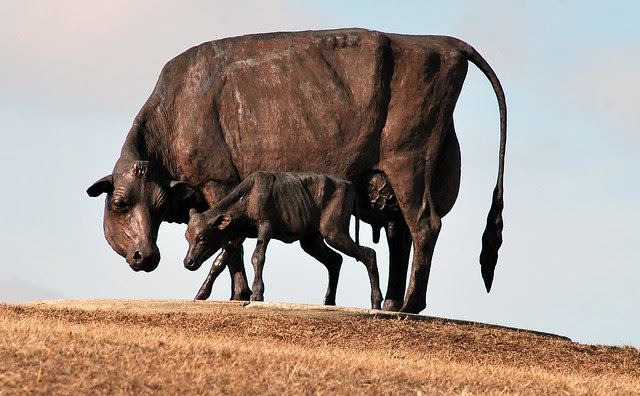 For over 40 years a women from Toledo, Iowa sculpted a cow from butter at the Iowa State Fair in Des Moines. Norma "Duffy" Lyons passed way in June 2011. She was known as the Butter Cow Lady. Her annual creation became an icon of the fair.
In 1991 she created a fiberglass with bronze patina sculpture of a cow and calf. The sculpture was erected on the hilltop at the intersection of Highways 30 and 63 and is framed by a huge Burr Oak tree. Since the summer of 2011 when the Highway 30 Tama/Toledo bypass opened, traffic at this intersection decreased. But don't let that stop you from catching the sculpture in various lights of the day and night. And, if you are hungry and want a bite of another Toledo tradition, try the Maid-Rite diner (loose meat sandwiches since 1926) just in front of the sculpture. Know that.
Posted by 42N at 9:28 PM 1 comment: 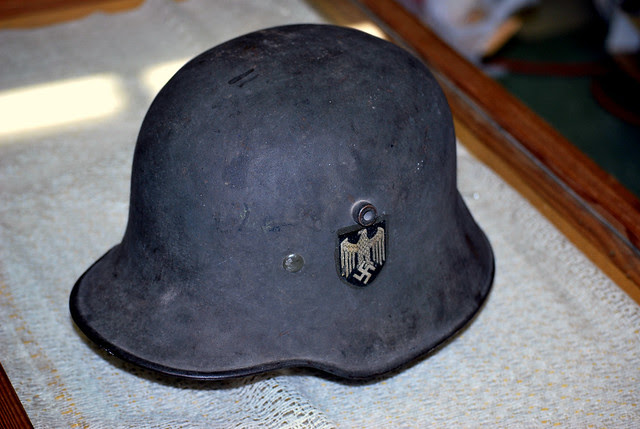 World War II's legacy continues 67 years after German surrender in the form of war relic transactions. Direct from a WWII veteran's estate in Dubuque, Iowa came this German helmet and bayonet (not pictured) for sale at auction. 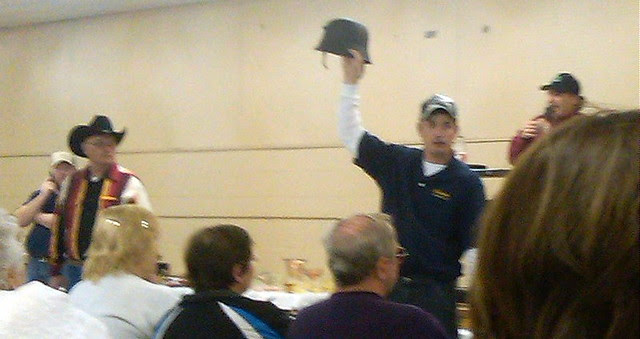 The long knife and scabbard sold first to a buyer from Wisconsin for $115. He collects Nazi relics and became giddy after the bayonet purchase, although the knife was missing one piece of hardware that attaches the weapon to a German rifle. His wife just rolled her eyes at the purchased weapon.

Then came the selling of the helmet which included a brief description of a cut chinstrap (perhaps by the bayonet) as the only area of concern. Audience attention went from busy chatter to almost silence as the auctioneer opened bidding to the floor and buyers on the telephone. Floor bidders stopped around $700, however action continued between phone bidders until a winner was declared. The hammer fell following a $825 bid from a person in New Jersey.
Brief relic selling was a curious matter-of-fact transaction. Following the sale of these war pieces, the auction resumed its course of collectible glassware, jewelery, appliances, records, magazines and such.
Encountering a piece of history is a rare occurance. Several people examined the helmet before the sale, remarking about it's iconic shape, the cut leather strap, and of course the Nazi emblem. Few expressed an uneasiness with the helmet's creepiness factor of being a powerful symbol of World War II. They are probably glad that the Third Reich helmet is on its way to New Jersey. Know that.
Posted by 42N at 10:45 PM No comments: 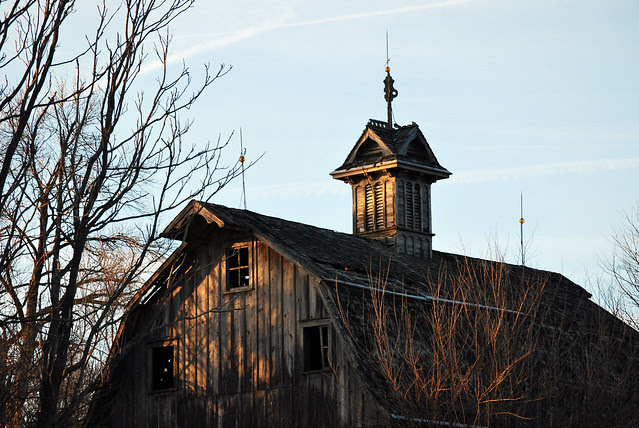 Long ago this barn was created by a relative of a 42N staffer. In the early 1900s a talented carpenter/farmer constructed the barn, out buildings, and house. By any definition, John Hynek (1886-1957) knew how to build things. His carpentry skills, still evident through the highly ornate detailing of the barn's roof, are reasons why this barn still exists despite the apparent lack of maintenance.

Barn and house construction occurred around 1912 to 1915. Sometime in the 1950s the property was sold and left the family. John and his wife moved a few miles away to run a small rural grocery store.

Today the property owner utilizes the buildings and grounds to store equipment wherever there is space - like some sort of a farm implement bone yard. And, unfortunately on August 2, 2008 the home was destroyed by an arsonist, but other buildings on the property survived, including John's barn.

I have seen a few barns like John's with the detailed cupola, scalloped over hang, and roof line gingerbread in the immediate area. John was known to build a few barns locally. I have also seen a preserved grain crib attributed to him about a mile from this site. A cruise through the countryside will show how unique this barn design appears to be - certainly one that is worthy for inclusion in Barn Charm. Know that.
Posted by 42N at 1:29 PM 1 comment: 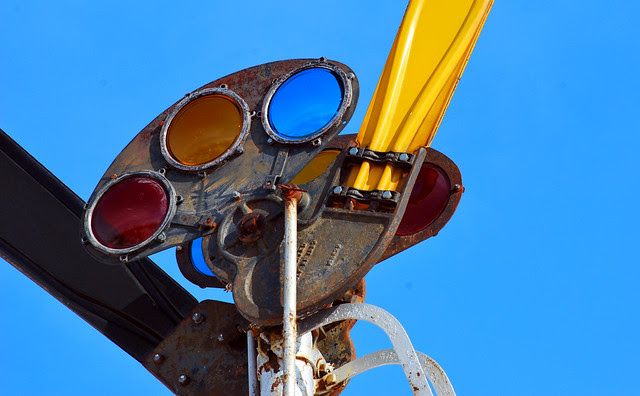 Above a former rail station (now a county museum) in Vinton, Iowa is this defunct signal system. I have no idea how this works or what information it was designed to convey. Maybe it signaled that the train was ready to depart from the depot.

The contraption's vibrant lenses show signs of being polished with a wax. Also, recently installed stainless steel bolts are visible on the yellow flag support. That means someone has made an effort to maintain or preserve this signal system.

Turned into a museum, the train station is still functional as a historic building, open by appointment. Perhaps some money and effort can be secured to properly return both the signal and station to its former condition. Future generations could then see how the early 20th century citizens moved from point to point. Know that.

Update: January 26, 2012 - A regular 42N reader from Missouri provided me with the name of the signalling device. Its called a semaphore. Here is an excellent site that explains U.S. railroad signals. Thank you G.
Posted by 42N at 3:24 PM No comments:

Dry Land for The Pearl Button River cruising season is long over for these continental mid-latitudes. This week's snow storm, the first of the 2011-12 winter, also ushered in frigid temperatures. One way to keep a boat from being crunched during winter's grip is to remove it from the freezing water. That is exactly what was done for Muscatine, Iowa's dinner cruiser, The Pearl Button. 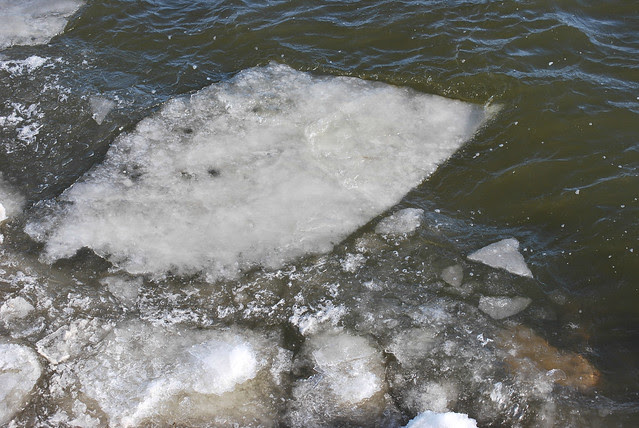 Today the ship sits atop supports just a few feet from the Mississippi River. A glimpse at the river's edge reaffirms why The Pearl Button was hauled out of the water. Large jagged ice chunks pushed by a strong wind smacked into the shoreline. A season's worth of this action could smash a hull to bits.

This week's visits to America's river - once to Bellevue and today to Muscatine is pure magnetism. Being drawn to this famous river with it's symbolism, history and beauty continues. Its like a siren's call but without the red hair mermaid. Know that.
Posted by 42N at 10:56 PM No comments: 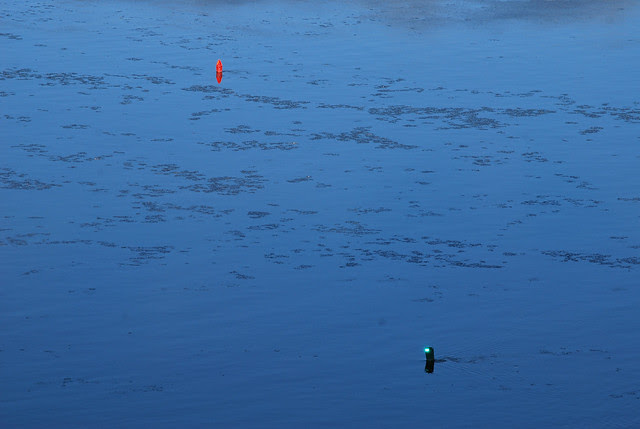 Channel markers light the way for sizable watercraft (barges) to locate the nine-foot deep area of the river's course. Good to know if I decide to take the Delta Queen or Robert E. Lee from 42N's Cedar River down to the Mississippi River junction at Toolsboro and then on to St. Louis and eventually New Orleans. Know that.
Posted by 42N at 5:15 PM No comments: 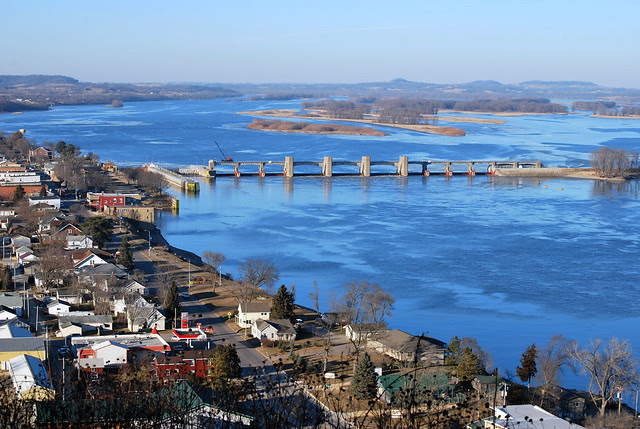 Yesterday with temperatures in the 50s, it was time for an afternoon road trip. My wheels aimed us to northeast Iowa and into the scenic driftless area. The 42N vehicle climbed a steep hill to get a bird's eye view of Bellevue, Iowa, revealing more of the statewide snowless condition.
That's the mighty Mississippi River flowing relatively ice free. See those ripples on the river above and below Lock and Dam No. 12? They are actually floating chunks of clear slush. Not quite icebergs. Iowa is on the left side of the river with Illinois on the right.
The late afternoon, low sun angle lighting was fantastic. Golden rays illuminated the area and the clear skies produced a deep blue color. No photo color enhancements were necessary to make this scene look good.
Tonight the first snowfall of the season is moving through and will bring up to 4 inches of snow to most of eastern Iowa including Bellevue. It was a nice winter (snow free) until now. Know that.
Posted by 42N at 10:35 PM 1 comment: 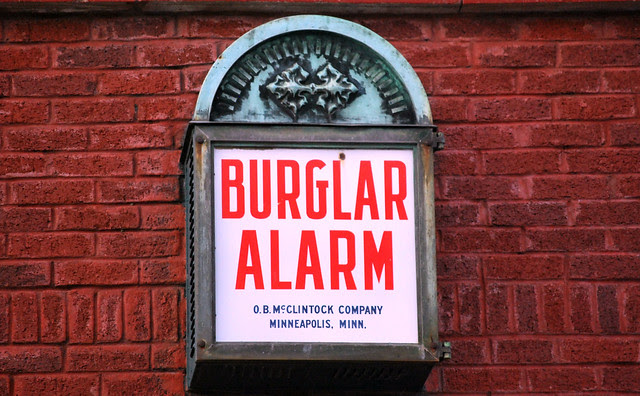 The Farmers Savings Bank building in a 42N small town remains guarded by a silent sentry. Built a hundred years ago, the one story brick building, now empty, features an outdoor burglar alarm from the O.B. McClintock Company. While these boxes now sell from $300 - $700 to collectors the real value is in the alarm's upper design.

Note the row of vertical strips below the arch. There are twelve strips each side of the arch apex. I take that to represent the hours of the day. The pointed design below the strips looks to be stylized oak leaves which denote strength and security. Together the symbols made of now weathered copper suggest bank safety 24 hours a day. Must be something to that. This building and sign are still standing after a century. How alarming. Know that.
Posted by 42N at 9:27 AM No comments: