He was a Confederate Soldier - John H. Walthall 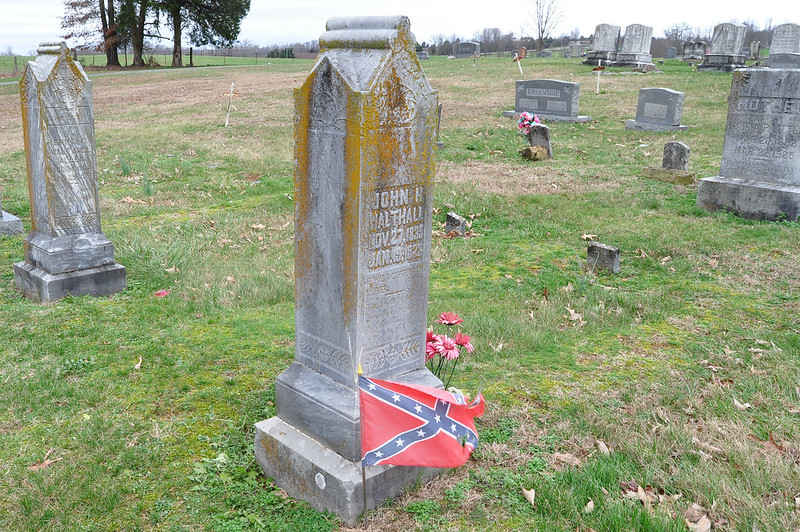 Here in Iowa the default view found in many area cemeteries is a mixture of generations including those who fought in wars. For the most part Civil War related soldiers and sailors who are buried in Iowa are identified as having fought for the Union. Their graves typically include a bronze Grand Army of the Republic (GAR) fraternal star along with a military headstone.

Things are different just a few states away in Tennessee. There you can find cemeteries with markers of soldiers who fought for the South under the Stars and Bars. Such is the case in this Monroe, Tennessee country cemetery located just a few miles from the Kentucky border.

John H. Walthall’s gravestone is inscribed with the description, “He was a Confederate Soldier” on the south facing portion of the marker. The Stars and Bars flag was flying close to John’s grave on the day we visited the cemetery in search of a different family lineage. In fact there were probably another four or five tiny flags marking where Confederate soldiers are buried. As I recall all of those soldiers lived several years after the war.

In Iowa, I have seen the Confederate battle flag flying over a few gravesites in Iowa’s only National Cemetery located in Keokuk. During the Civil War the Mississippi River town established five hospitals to care for the wounded from both sides. When Southern soldiers perished at the Keokuk hospitals they were buried near their Union cousins in what would become known as the Keokuk National Cemetery.

I’m guessing that scores of former Southern soldiers came to Iowa after the war, lived their lives and are buried here. Perhaps their southern military identification was suggested to be left off their headstones by surviving family members who wanted to just move on with their lives rather than inflame. Its an interesting subject to explore further.
Posted by 42N at 6:23 PM No comments:

The Demise of the Armstrong Lumber Company Building 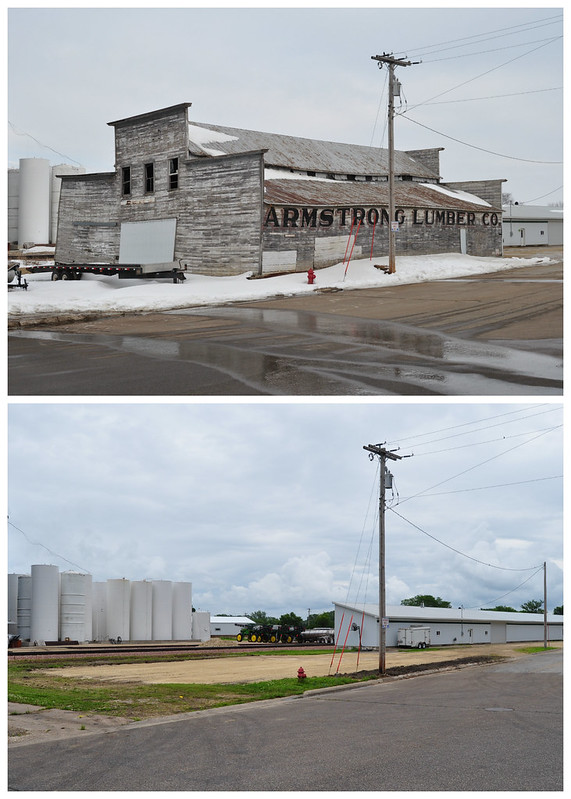 In Dyersville, Iowa the Armstrong Lumber Company building stood for several decades...until 2015. Last February, I photographed a couple old time buildings that were positioned along the east-west railroad track in Dyersville. The wooden lumber building was interesting photographically having been long ago boarded up and abandoned. Four months later I returned to Dyersville to find the Armstrong building gone. Nothing in its place except for a newly crushed limestone parking area.

Its easy to imagine back in the day that rail cars would bring lumber to Dyersville, where it was unloaded and stored in the Armstrong building. Farmers and towns folk would come to the business and buy materials for farms, businesses and homes. While commercial and residential lumber business continues elsewhere in Dyersville, the removal of the Armstrong Lumber building along the rail lines is another chapter describing how cities transform in the Midwest.

Was something lost in the removal of the building? Certainly the owners eliminated a liability and a potential hazard, but a piece of the city's heritage was also removed. Perhaps documentation of the building and published accounts of the business are preserved at the local historical society or museum.
Posted by 42N at 7:40 PM No comments: