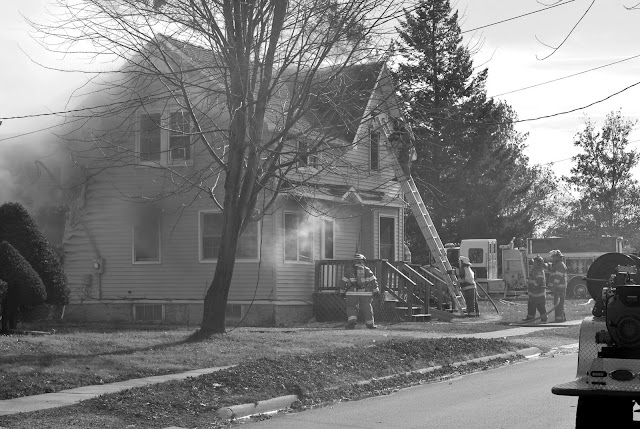 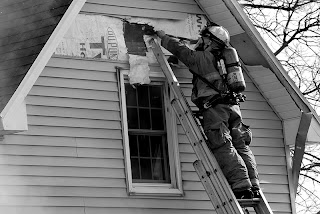 Yesterday while in Mount Vernon, Iowa one, two, then three fire trucks rolled by. A few minutes later a fourth one sped off to the east towards Lisbon. Camera in hand, it was time to go to see what was happening.

Lisbon is located just a few miles east of Mount Vernon along the Lincoln Highway. Downtown was filled with smoke when we arrived. A house just a block south of Main Street was on fire. 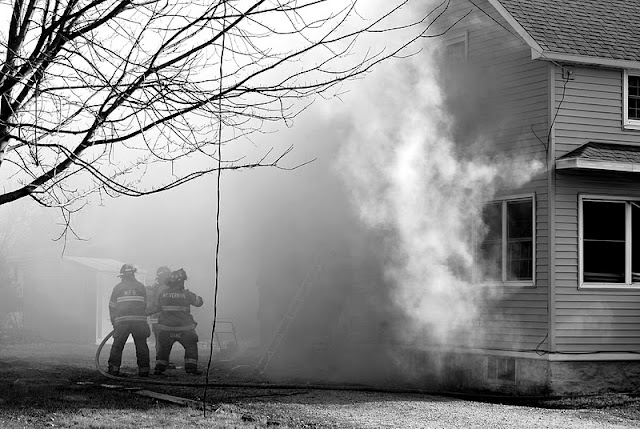 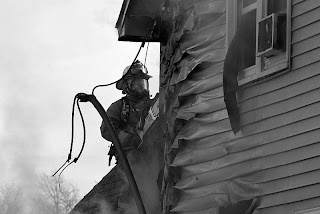 We arrived on South Jackson Street to see several fire and rescue vehicles trying to contain a one house fire. Many people including some local firefighters from Lisbon were in transit to the UNI dome in Cedar Falls for their local high school football championship game.

As a precaution other town fire departments were recruited to fill in if needed. On this dry, cold and windy day the help was needed. 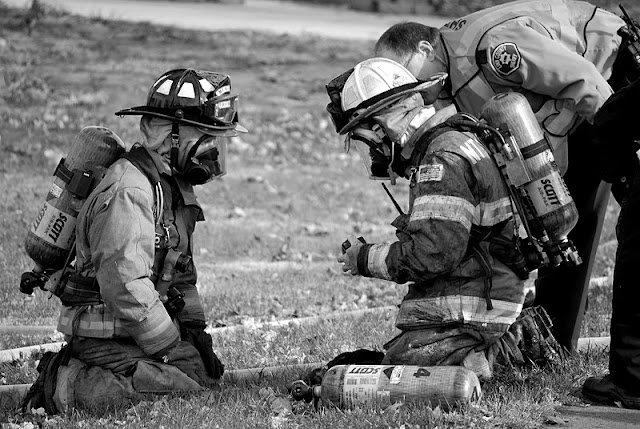 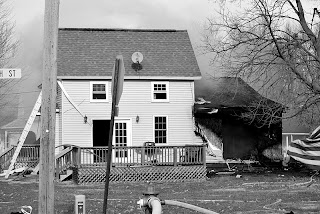 While the fire remains under investigation the newly remodeled section of the house was the area that received the most damage. The family was away from the home when fire broke out but were onsite during the emergency. Their pet dog did not survive.

Local media present at the scene included KGRG television and the Gazette. Watch and read more about the story here. 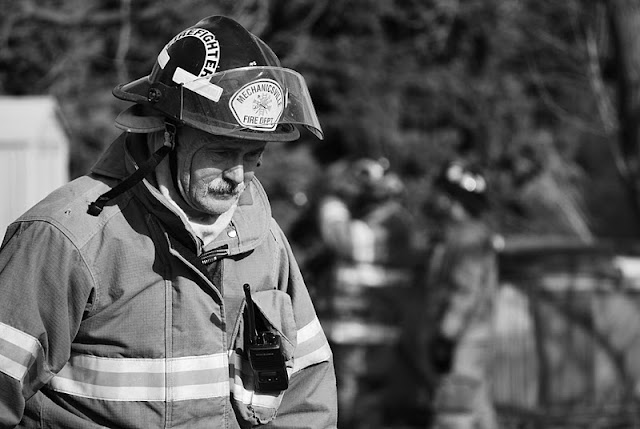 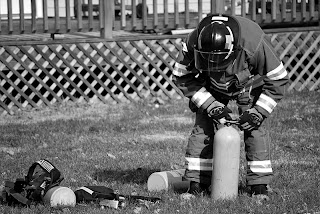 Firefighters from Lisbon, Mount Vernon, Mechanicsville and Solon were on the scene - and maybe more. The duration and characteristics of the fire meant that the fire personnel rotated in and out of the house, changed oxygen tanks often and answered to many chiefs. Their combined effort fortunately limited damage to one house. We as a society don't pay these firefighters enough to do what they do. 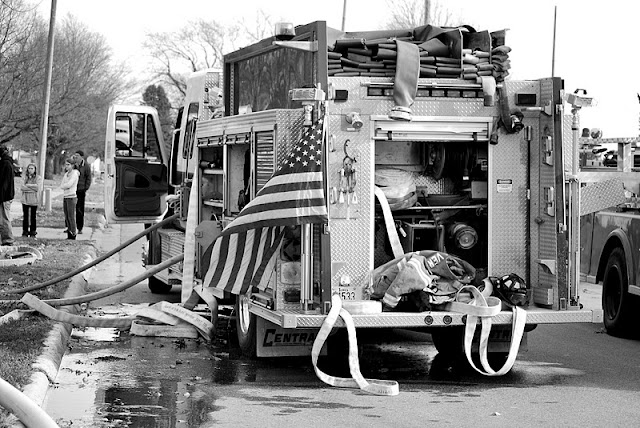 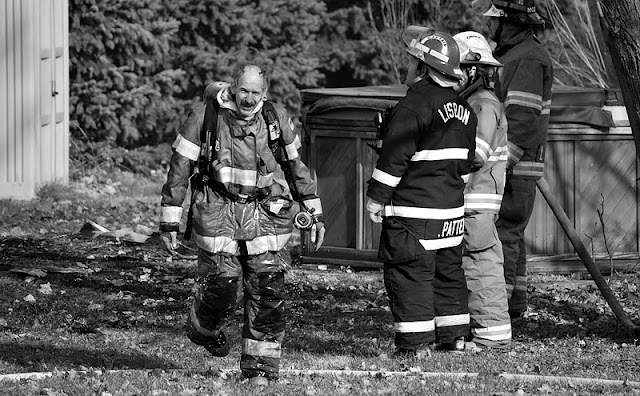 Soon after the fire was contained, the multiple town crews began to transition into a cleanup and monitor mode. This firefighter had his outfit sprayed to wash off blackened soot. Later in the afternoon the home was secured.

Having the camera present during various times allows for recording some great images. Sometimes the opportunities are simple, like photographing a dragonfly's wings, other times the subjects are more dramatic. Know that.
Posted by 42N at 4:48 PM 2 comments: 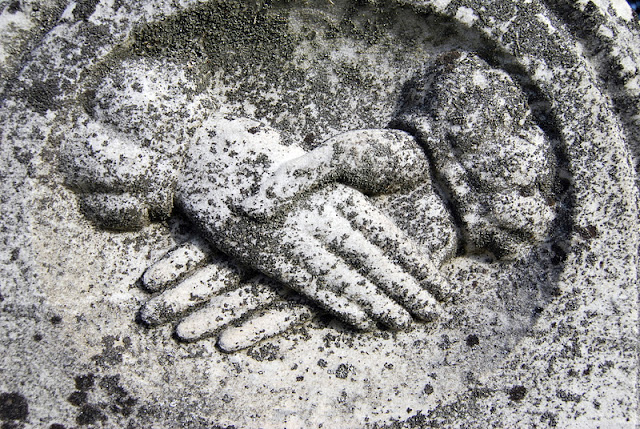 A weathered handshake symbol on a local 42N cemetery headstone is a fairly common site on older markers. This particular headstone is made of white marble and shows the effects from years of temperature extremes and freeze/thaw cycles - plus organic visitors. Granite seems to stand the test of time better than marble around here.

So what does the handshake symbol signify? Two answers. The first is the depiction of a greeting of the departed to a more heavenly existence. The other answer appears commonly when a married couple is buried together. Cuffs sometimes show masculine and feminine characteristics. There may be other answers. Let me know. Know that.
Posted by 42N at 12:25 AM No comments:

Swaying in the Autumn Winds 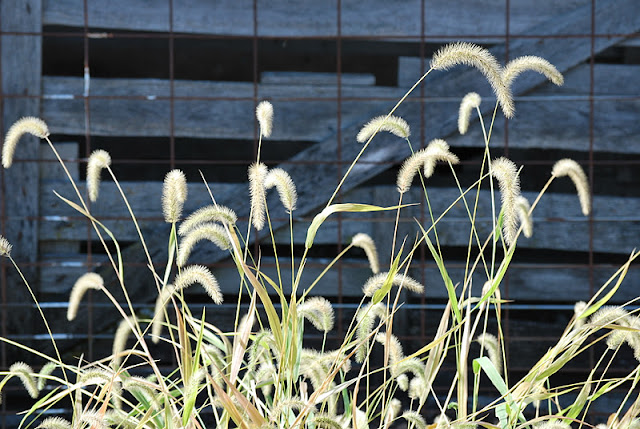 At this time of the season in 42N latitudes, most leaves have fallen and many of the formerly green plants are now yellow or brown. Still there is beauty that can be found in the final phases of autumn. Here the tall grasses of a county fairgrounds sway in the breeze. We received the first snow of the season last week which later melted that day. Its surely a prelude of what's coming in the weeks ahead. Know that.
Posted by 42N at 12:08 AM No comments:

The American Legion Post in Dyersville, Iowa knows how to make use of space by creating an impactual message. On the roadside face of an ordinary building an artist has created elements of the American military in action from World Wars I & II, Korea and Vietnam. The unifying graphic theme is that of the foot soldier in each vignette with nods to the other branches of service. I believe the panels were started in 2008 with the WWII graphic (see story here.) After visiting the "Field of Dreams" movie site a few miles away come by the north end of town by following the railroad tracks. There you will find this one of kind mural. Know that.
Posted by 42N at 5:52 PM 1 comment:

Today through the power of the Internet and firsthand research brings into focus the special story of a fallen veteran from the 42N area.


Three weeks ago a stack of papers bought at auction in , yielded among other things, a small booklet called the Alumni Directory 1880 – 1952. In the booklet are very brief updates of the then living or deceased high school classmates. I flipped through the pages, and stopped on one entry for the class of 1935. There among the time period of World War II was a six sentence description of a graduate who served in the Army Air Corps, was shot down, hid by the Underground and later shot by the Germans.

I was intrigued with this particular listing and went into research mode to find more information about Tech Sergeant Orian G. Owens and what happened to him. Here is his story for Veterans Day:

Following his graduation in 1935 Orian George Owens (born Jan. 22, 1915), a farm boy, moved to the , area in . Orian’s brother Harold graduated from a few years later.

In 1942 Orian became one of 61 county men who passed their physical examinations at the (near ) induction center. On Aug. 27th Orian left for the  Army at , where he was assigned various duties.

Due to his farm machinery background Orian was assigned to the Army Air Corps and trained at the Shephard Field, California, Panama City, and . He became assigned to the 469th Air Force Bomber Squadron at where he became a First Engineer and top turret gunner on a B-17F Bomber. During a training exercise the landing gear jammed and Orian had to squeeze himself through the wing to manually lower the gear.

After training, Orian was sent to and based at Thurleigh. His B-17F (tail number 42-30782) Bomber was nicknamed, "Rationed Passion." On January 11, 1944 the plane was part of 663 heavy bombers of the 306th Bomb Group. The target for Orian's tenth mission was a manufacturing plant in .

On the return trip, the plane was hit by flak and crashed in . At that time the Germans occupied , and . Orian was injured when his parachute opened and then broke a rib upon hitting the frozen ground.

On January 28th the newspaper reported that Orian’s father had received notice that Orian was declared missing in action. At this same time Orian’s brother Harold was a POW under Italian control.

The group of ten U.S. airmen, including Orian waited for conditions to improve for them to be moved to , then and finally . In the mean time the Germans closed the routes and the ten airmen had to wait for new escape routes to be established. Two men decided to escape on their own and later were successful.

Orian’s group of eight airmen had just concluded breakfast at 8 AM on April 22, 1944 when the sound of rifle fire came nearby. Nearly 1500 German SS soldiers flooded the area looking for the protected airmen and members of the underground. Orian’s group left the wooded area and was taken into German custody in Chimay. They were interrogated, stripped of their dog tags, false papers and money. After a three hour interrogation the men were loaded onto a truck with guards and headed back to the woods.

Once in the woods the airmen were escorted by two German soldiers each to a certain spot where they were lined up with their hands tied behind their backs. Then the group was separated with each airmen going in a different direction with two soldiers. A signal was given and the Germans shot the airmen in the back of their heads. The bodies were buried in a mass grave near Gosserlie’s airfield. Much later the grave was discovered and the bodies were transported to the military cemetery in Margraten, the .

The eight airmen killed that day were from three different aircraft.

Five months later, the U.S. Army declared Orian as Killed in Action since no one had seen him since the capture. Again his father, George received word of the matter from the War Department. Orian’s brother, Harold, once held as POW was able to escape and rejoin his unit after a 500 mile journey.

After the war, Belgian military authorities tried the main culprits who carried out what is now known as the Massacre of St. Remy. In 1947 four men were sentenced to death while another two served jail time as a result of their complicity in the matter.

The crash of Orian’s B-17 ten member bomber resulted in five KIAs, three POWs and two airmen who evaded capture. In 1948 Orian’s body and other fallen veterans was recovered from Margarten cemetery for transport back to the . Flag draped caskets, coming from the war theaters were brought to at intervals throughout 1948. Last honors were accorded to the serviceman at funeral and burial rites. Final interment was in the cemetery chosen by his next of kin.

Orian’s father George requested that his son be buried next to his mother at a cemetery in . A military funeral for T/Sgt. Owens was held on November 4th, 1948 at the in . Orian was awarded the Purple Heart, Air Medal and the Oak Leaf Cluster posthumously.

The town of Lisbon continues to honor its war dead. A new monument to the fallen veterans of Lisbon contains Orian’s name among the list of war dead. Periodically the Lisbon History Center conducts cemetery walks called, “Walk Through the Past” so that stories like Orian’s continue to be told. Know that. 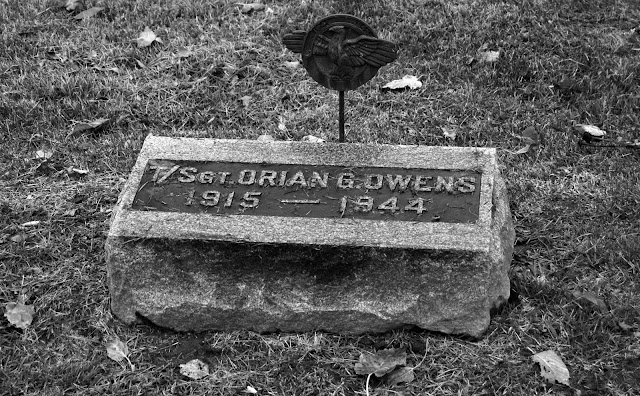 During Veterans' Day week while researching a veteran's story I found this symbol that was used during World War II. Its called a Discharge Button. The button (or pin version) was issued to all honorably discharged American military personnel of World War II. The button was issued free of charge to the veteran upon discharge. If the button was lost or destroyed the veteran could purchase a replacement, at cost for seven cents, from the nearest Quartermaster Supply Officer upon presenting proper discharge papers. Today you can more commonly see symbol on metal plaques of American WWII veteran's graves. Know that.
Posted by 42N at 11:35 AM 1 comment: 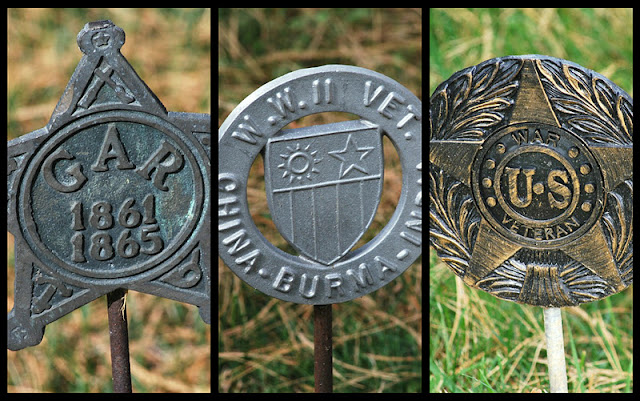 This week celebrates American veterans. Recently on a visit to a small eastern Iowa cemetery within the Amana Colonies, I discovered an assortment of metal grave markers depicting conflicts where Americans fought. This particular photo representation features the Civil War (Grand Army of the Republic), World War II (Indochina Theater) and Vietnam. Other metal markers for the Spanish-American War, World War I and Korea are also present. For such a very small cemetery, this mostly German immigrant region of Iowa substantially represented itself in all major conflicts of the mid-nineteenth and twentieth centuries. Their dedication to defend our country is an important tenant of who they were and of what we have become. Know that.
Posted by 42N at 9:01 AM No comments: 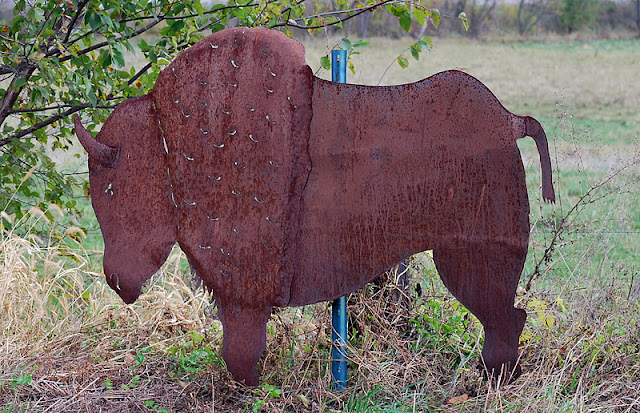 A staple of the prairie. American Bison roamed grasslands of the Midwest for years. Today bison herds can be found in Iowa at a few fenced ranches and zoos. This rusty sculpture located in the Amanas recalls the days when these large creatures roamed the endless grass prairies. Know that.
Posted by 42N at 3:14 PM No comments: