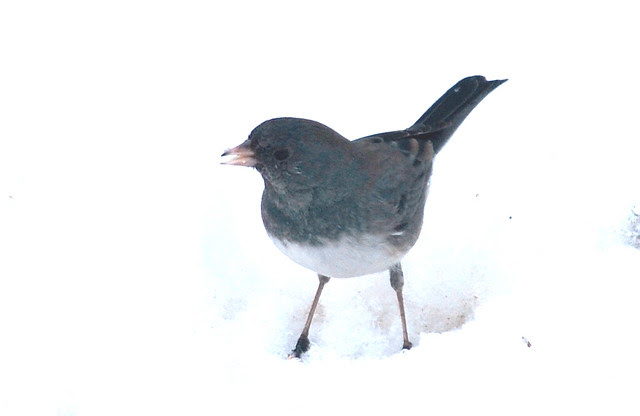 Another backyard visitor showed up today. Are these birds wintering here or have arrived early from some southern location? News alert. We are forecasted to get another big snow storm this coming Monday into Tuesday. Perhaps in a month's time these birds will be joined by the real harbinger of Spring - robins.
Posted by 42N at 4:46 PM No comments: 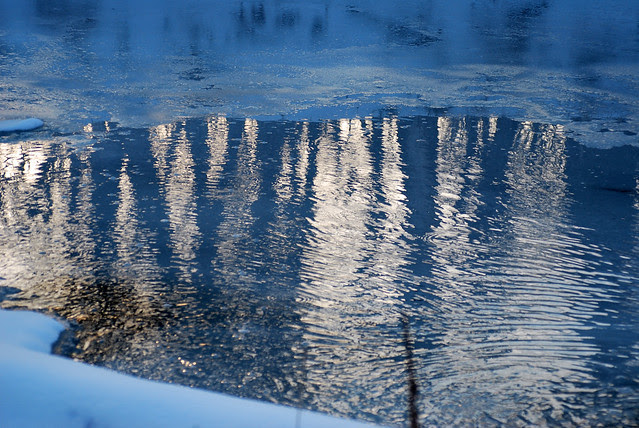 Last weekend nearby Indian Creek showed signs of melting and refreezing. That's a good sign that indicates Spring is less than a month away. In the melt water highlighted by a setting sun, the slow moving water turned just a tad shade of blue. Thanks to image processing that blue became a bit more enhanced. The end result is a cool scene in any season.
Posted by 42N at 1:13 AM No comments: 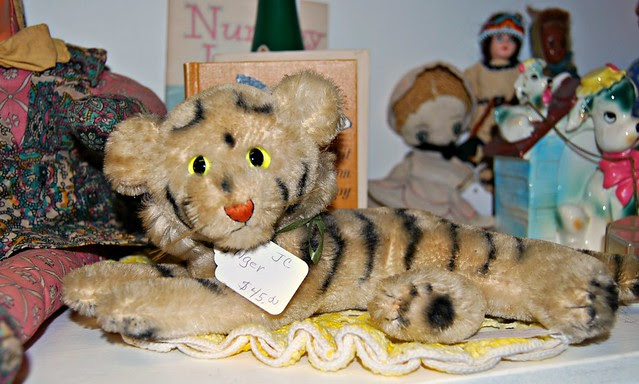 Only $45 for a tiger? You bet. This antique cat toy is market priced due to its presumed age and pristine condition. Just think of all the modern toys that you may have around your house. In 30 or 40 years they too may be worth more than their original purchase price. This tiger is available at Grapevine Antiques in Amana, Iowa.
Posted by 42N at 9:18 PM 1 comment: 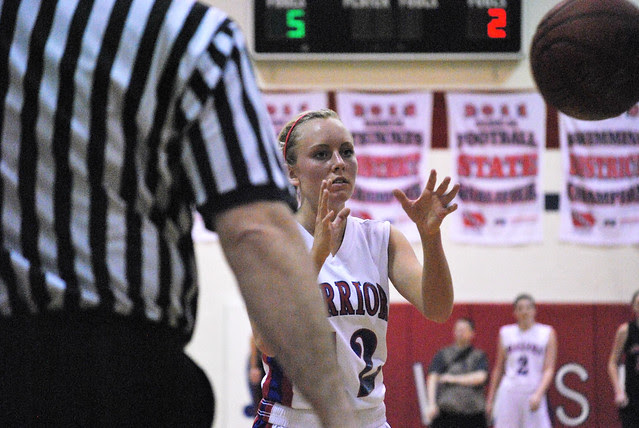 Inspired by a recent blog posting from Mrs4444 about photographing a local basketball game I decided to post a few images from a local high school basketball team. Photographing a fast moving game in a dark gym is a challenge. Talking to the professionals present at these games has led to a compilation of a few things to consider when photographing basketball. 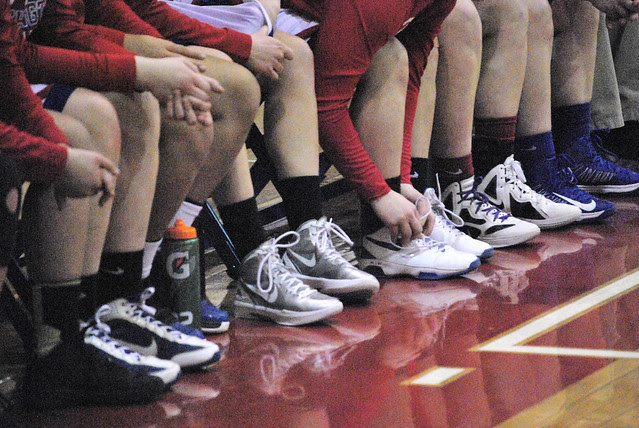 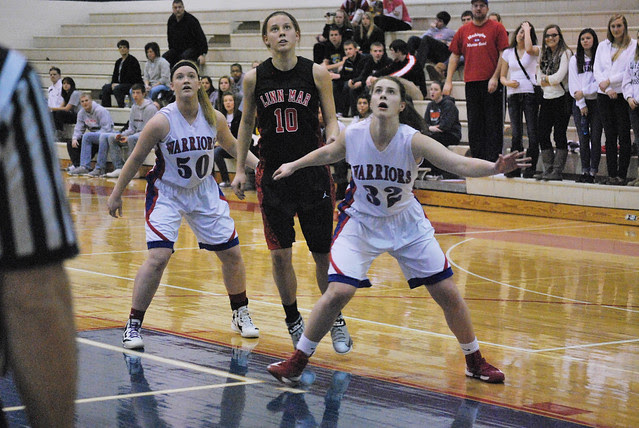 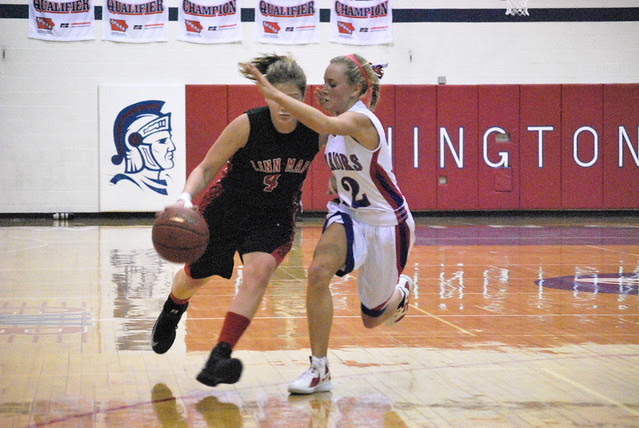 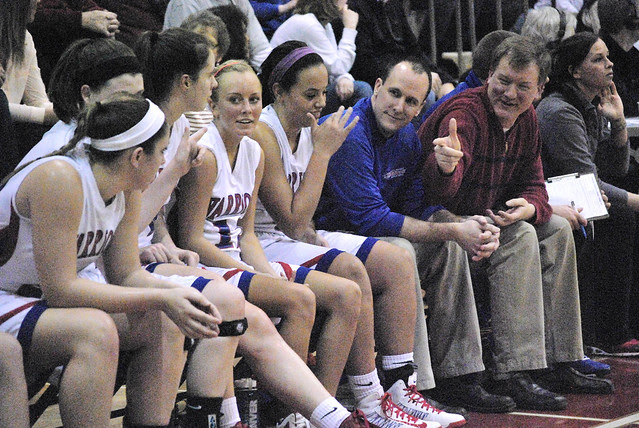 These are photo tips that I learned from years of shooting in this gym. The team, Cedar Rapids Washington High School won this particular regional game 11 days ago against cross town Linn Mar.

WHS went on to capture the regional final and qualified for state. Cast as the tournament Cinderella team for knocking off a highly ranked team, the unranked Warriors lost this afternoon in first round tournament action. Their season ended at 17W-7L. No doubt I will be back next fall to photograph many of the same players.
Posted by 42N at 8:30 PM 1 comment:

A Winter's Ride Near Indian Creek 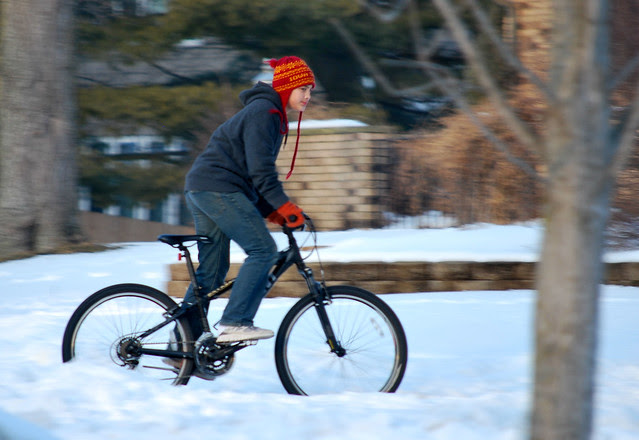 Three days ago we received the season's third measurable snowfall. Not too much to complain about. A sure sign of Spring is non-Winter activities like this bike rider. While we expect another 3-5 inches of snow Tuesday midday, we know that warmer temperatures are just around the corner. Now if only this moisture could recharge subsoil depths rather than running off and thus ending the yearlong draught. However, the upside to this dilemma is the neighborhood snow melt will drain into nearby Indian Creek, then to the Cedar River, merging with the Iowa River at Columbus Junction, then finally joining the Mississippi River near Toolsboro, Iowa. Old Man River has been near historic low depths since last Fall forcing tow barges to operate only below St. Louis. Perhaps this melt will help.
Posted by 42N at 10:33 PM 3 comments: 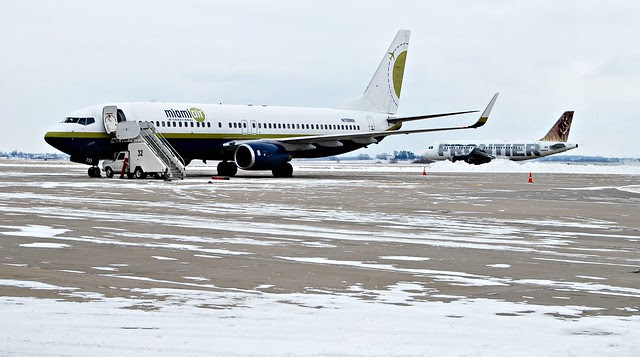 has its Phil to comment on the coming of Spring. At the airport (CID) the tarmac is graced with aircraft from other parts of the globe. On February 2 (Groundhog Day) a Boeing 737-81Q from Miami International Airlines was present for chartered passengers. Through the power of the internet you can see where this commercial plane travels by going to a link like FlightAware. Its been a week since this scene was recorded. The snow is all but gone having been melted by warmer temperatures and rain. Sounds like Punxsutawney Phil was right about fewer weeks until Spring arrives.
Posted by 42N at 5:25 PM No comments: 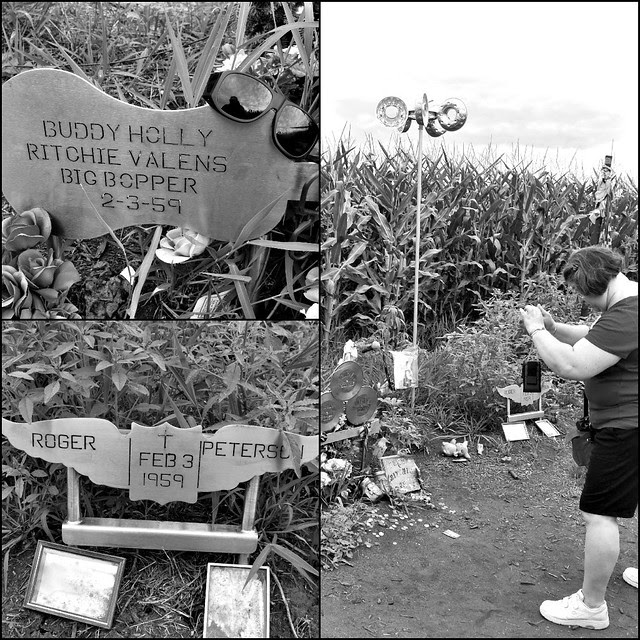 Tonight is the 54th anniversary of the 1959 Winter Dance Party concert in Clear Lake, Iowa. 54 years ago tomorrow a plane crashed carrying early rock and roll pioneers Buddy Holly, Richie Valens the Big Bopper and their pilot Roger Peterson soon after takeoff from the Mason City airport. The small plane came to rest in a farm field (near this wire fence) just northeast of Clear Lake. Directions to the site can be found here.

These photos are from July 2012 when I traveled to Clear Lake to see firsthand what the site is all about. I discovered the plane crash location is open to the public and is marked with coins, glasses, candles, flowers, liquor bottles, clothes and paper tributes - all from fans. The trail to the crash site is marked by huge iconic Buddy Holly glasses resting on two concrete posts. About a quarter mile into the field along the wire fence is a conglomeration of memorials to the musicians and pilot where the plane came to rest.

After visitors left the site I stayed to photograph the area in more detail.  It was a bit odd to be the only person at the site, surrounded by tall corn, blowing wind and soaring temperatures nearing 100 F. I didn't hear any voices or music in the corn but definitely was aware of the historical surroundings and lives lost. 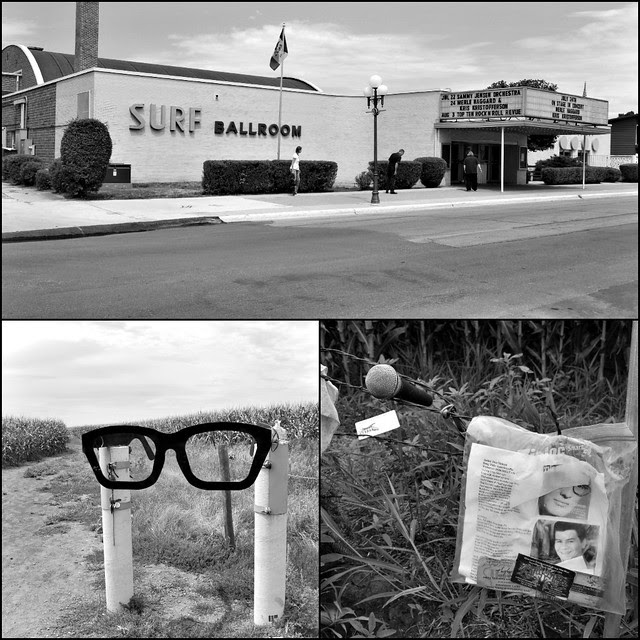 On the north shore of Clear Lake, the Surf Ballroom is still a vibrant part of the entertainment scene. It regularly attracts national acts as was evident during the time I visited. Tonight actor Gary Busey who played Buddy Holly in The Buddy Holly Story will be at the Surf's screening of the 1978 movie.
Posted by 42N at 7:57 PM 1 comment: