Barge Work on the Mississippi River at Muscatine, Iowa

River commerce is alive and well on the Mississippi River. Barge traffic is quite common along this portion of the river at Muscatine, Iowa where grain and other terminals are located. Marquette Transportation Company's Jacob Michael Eckstein, an inland towboat positions a 15 barge array for the journey northward.

According the U.S. Coast Guard database, the Eckstein was once called the Seminole Princess. The vessel was built in 1984, is listed as 130 feet long and hails from St. Louis, MO. More data can be found here.
Posted by 42N at 7:51 PM No comments: 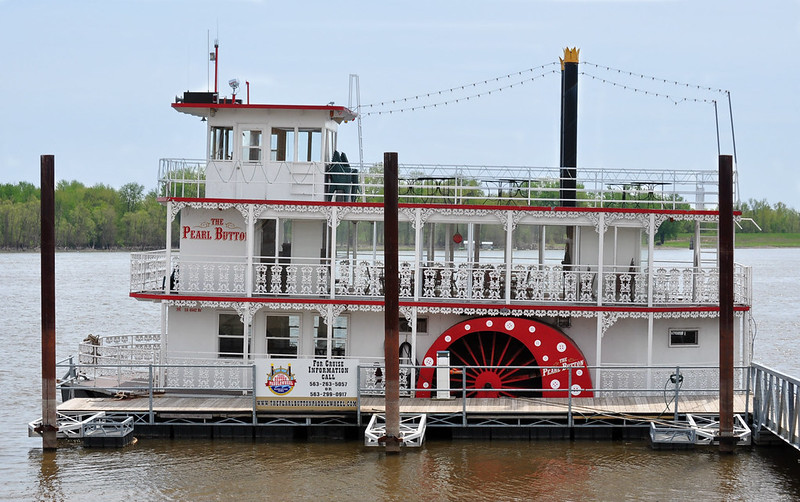 The Pearl Button is a modern day, old-time looking excursion boat located in Muscatine, Iowa. When visiting southeast Iowa I am on the lookout for the paddlewheeler cruising on the Mississippi River. While the boat seems to be always present at its dock, I did see a crew member preparing the boat with supplies for an excursion a few years ago. The Pearl Button's website indicates that the boat is available for river cruises but has no set schedule. For scheduled cruises, boats like the Riverboat Twilight can be accessed in LeClaire, Iowa, home of the History Channel's American Pickers on the Mississippi River. And for even longer cruises you can jump onboard other lines at St. Paul, St. Louis, Memphis, New Orleans and other ports on the great river. 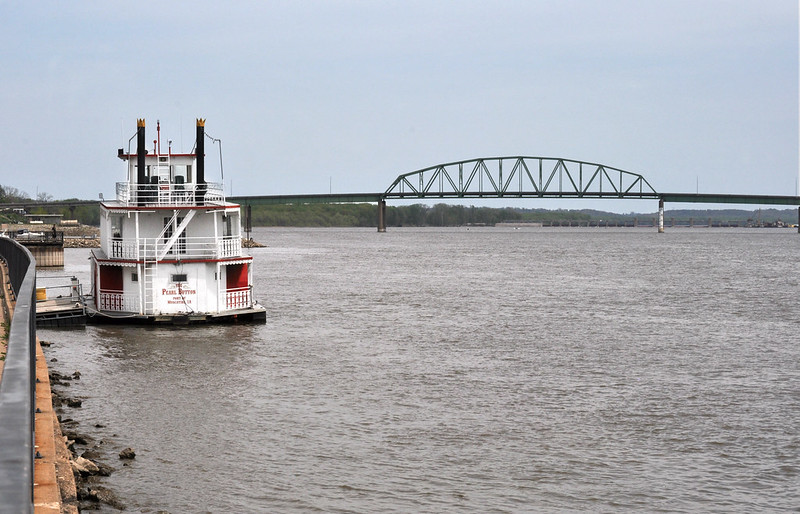 The Pearl Button is docked at Muscatine's city dock landing. Attached to a floating dock which is anchored by three huge poles, gives the Pearl Button plenty of room to stay put should (and when) the river floods. On this day the Pearl Button remained docked while the Riverboat Twilight, sport boats and barges passed by on Old Man River.
Posted by 42N at 9:23 AM No comments: 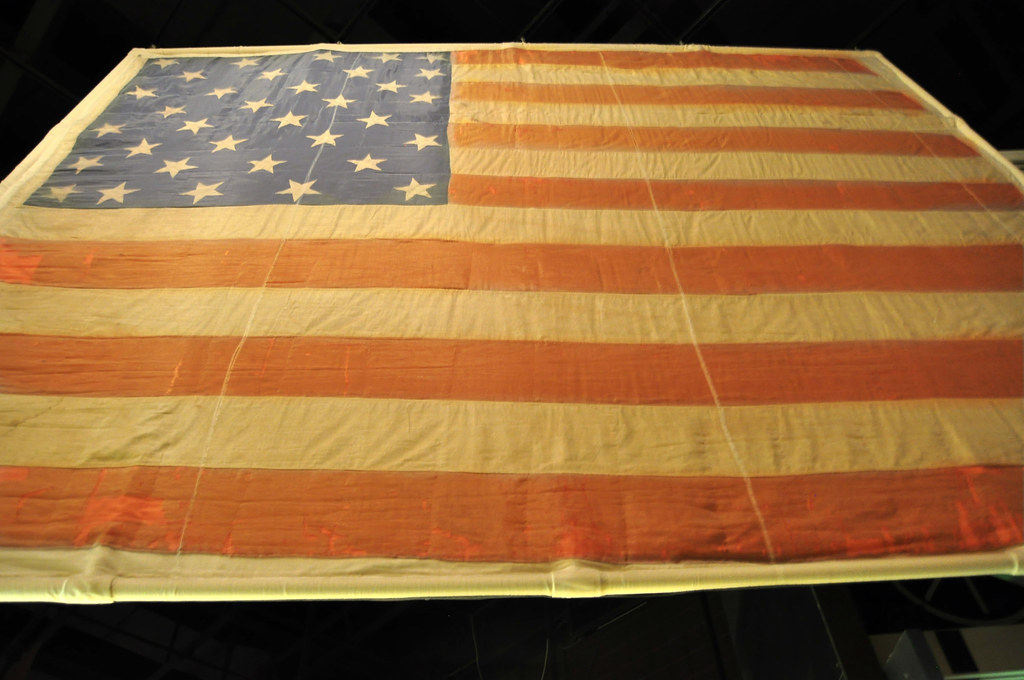 This 34 star US flag flew during opening ceremonies of the first railroad bridge in Davenport, Iowa. The date was April 21, 1856 - 160 years ago today. See it at Davenport's Putnum Museum.
Posted by 42N at 12:01 AM No comments: 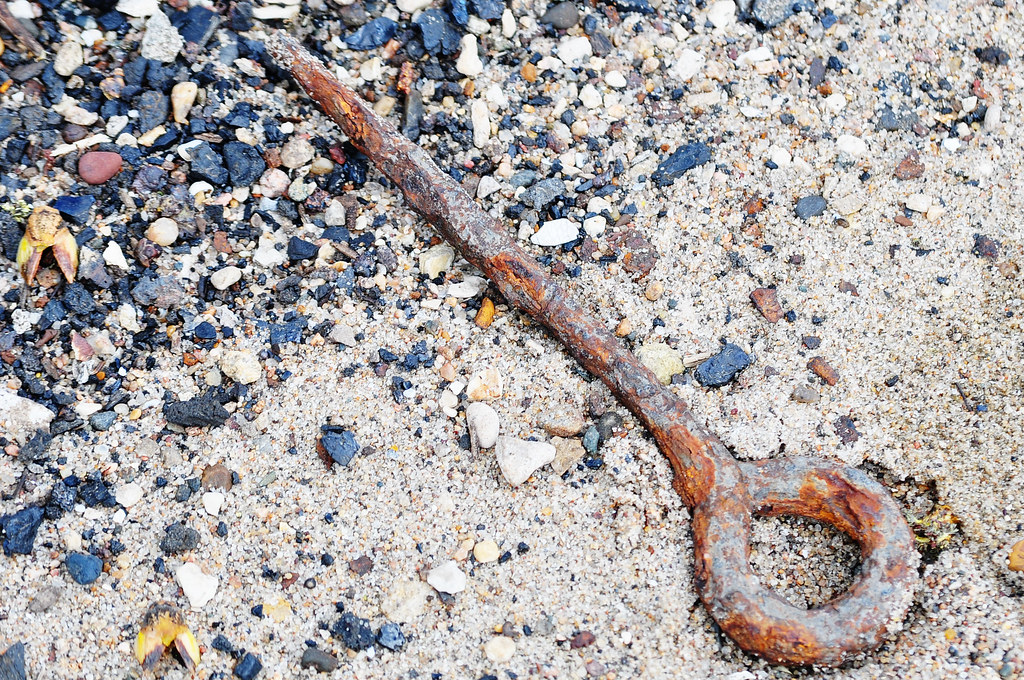 There's an old dump adjacent to the Cedar River in Cedar Falls, Iowa. As the sandy soil erodes, a mix of industrial and residential discarded material surfaces. Present in this image are fragments of coal and a large iron I-stake. A few steps away are shards of glass from broken small bottles and various busted ceramic pottery. Its an interesting area but be sure to wear thick footwear. Clues from the marks on the ceramics and other material suggest that the majority of the dump contains items from the late 1800s. About three feet away from this stake is where lucky Noah (see previous post) found the clay pipe bowl.
Posted by 42N at 7:47 PM 1 comment:

A Rare Find Along the Cedar River 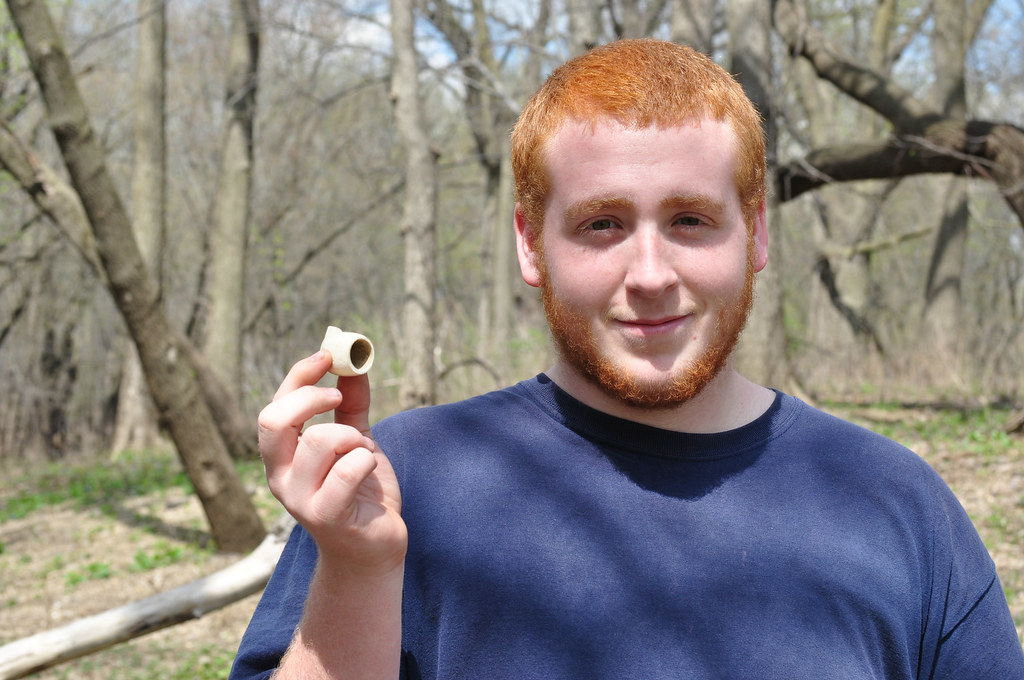 Meet Noah. He and his buddies were out exploring the river parks in Cedar Falls on Sunday. I was out looking for anything interesting to photograph when Noah and his buddies stopped by. While we were talking about photography Noah happened to look down at his feet. There he picked up two items on the Cedar River shore line. One item was a cattle bone that was cut into a ring or letter "O" shape. Next to that was this bit of history.

Noah picked up a clay pipe bowl without the stem. He handed it to me to examine and I cleaned it of sand. You have a clay pipe fragment from 1850 - 1900 I told him. The bowl is unbroken and in good shape. He offered to give it to me but I declined. I explained that he had found something special and should keep it. We looked up similar pipe fragments on eBay to discover a lot of 16 clay pipe bowls (without stems) are going for $80, so about $5 a piece.

Noah planned to show it to his history teacher today but more importantly he seemed to get real serious about "treasure" hunting especially since he actually found something cool.
Posted by 42N at 7:53 PM 2 comments: 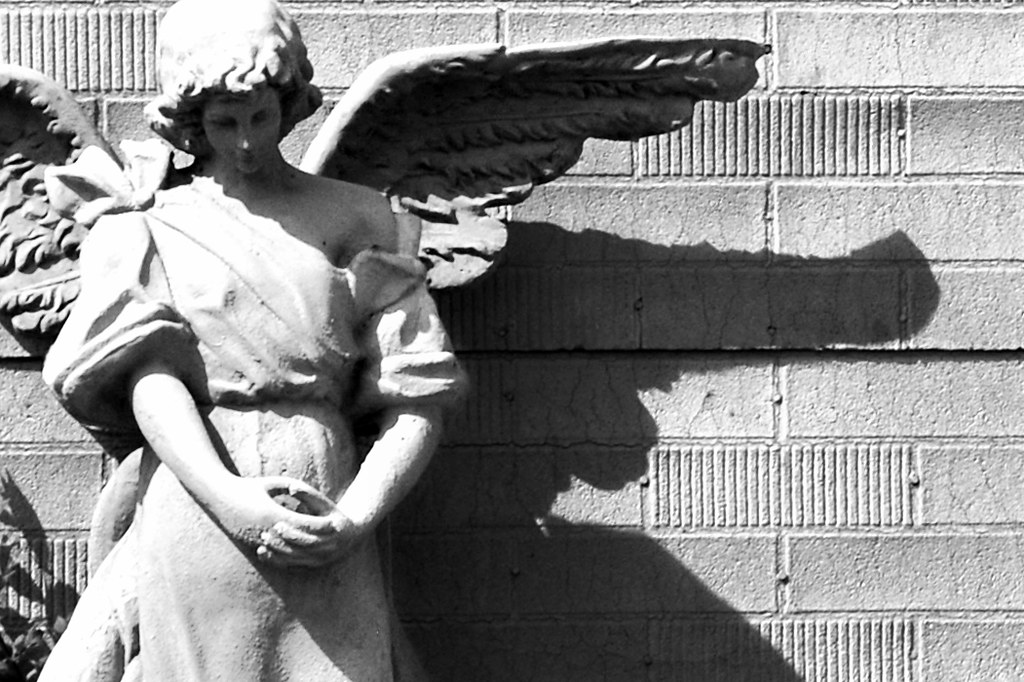 An angel does exists in Amana, Iowa. Made of cement and molded as a figure it stands watch over a flower garden with wings pointed east and west.
Posted by 42N at 3:00 AM No comments: 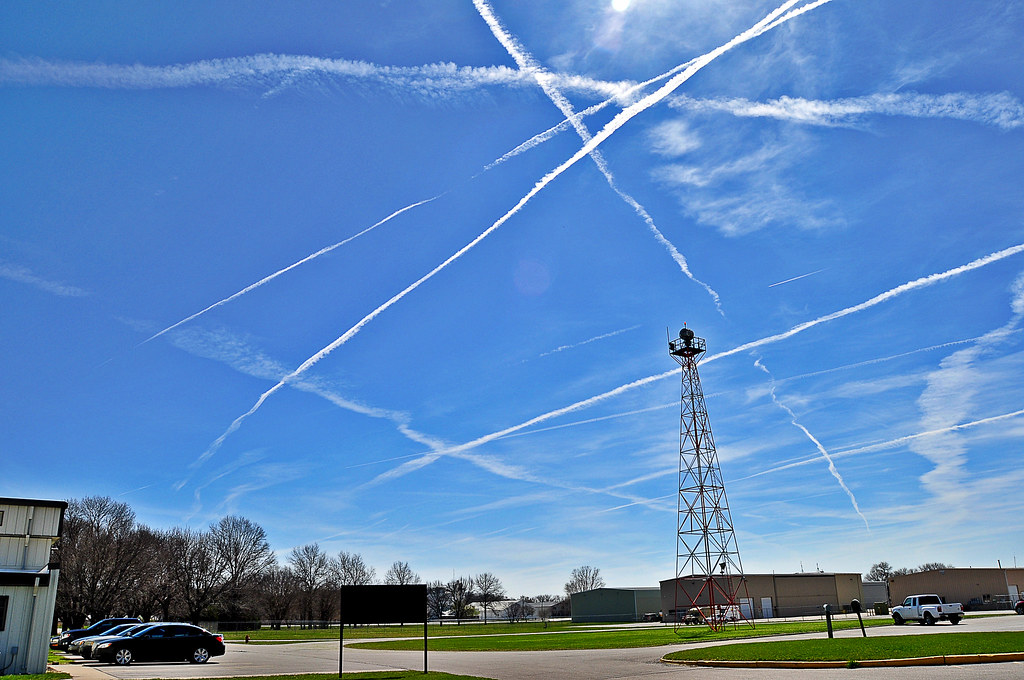 Air traffic over Iowa City is always busy with scores of transcontinental flights. A Variable Omni Range transmitter is located in nearby Hills, Iowa that helps navigate air traffic over what the media calls "fly over" country. On cold air days people who live near the 42N latitude just a few miles north of Iowa City can look to the south and see this kind of traffic. And with apps like FlightAware you can easily identify those aircraft bound from NYC to LA.
Posted by 42N at 9:59 PM 2 comments:

A Bit More of King Tut at Davenport's Putnum Museum 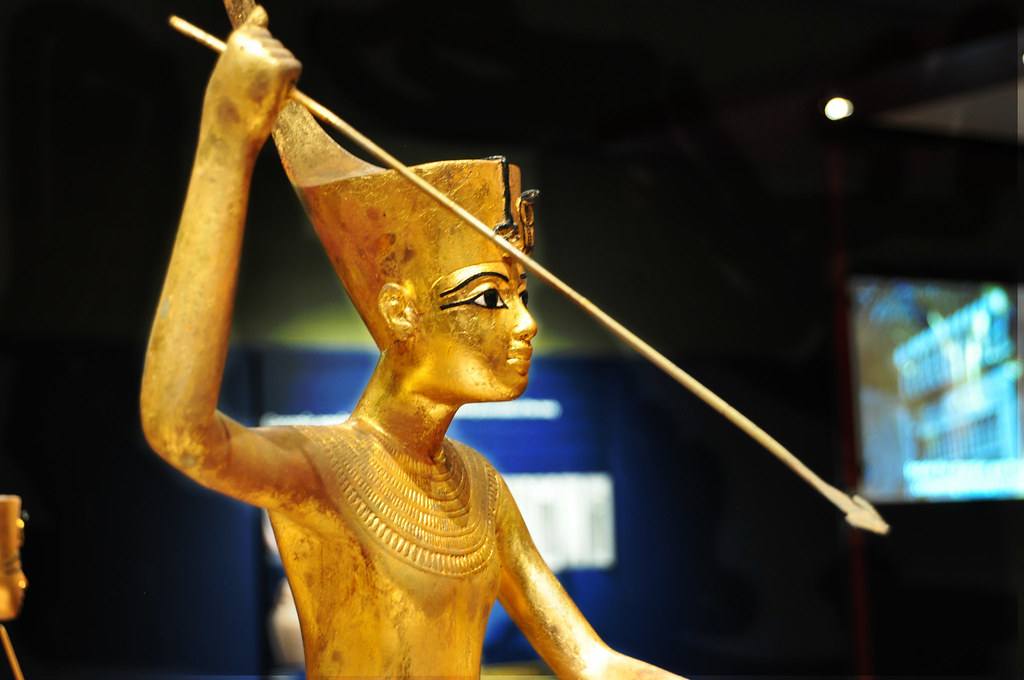 A few more photos of the King Tut replica exhibition at the Putnum Museum in Davenport, Iowa. This statue is one of several roughly two foot travelers that helped make the journey to the other side a bit less stressful for the boy king. 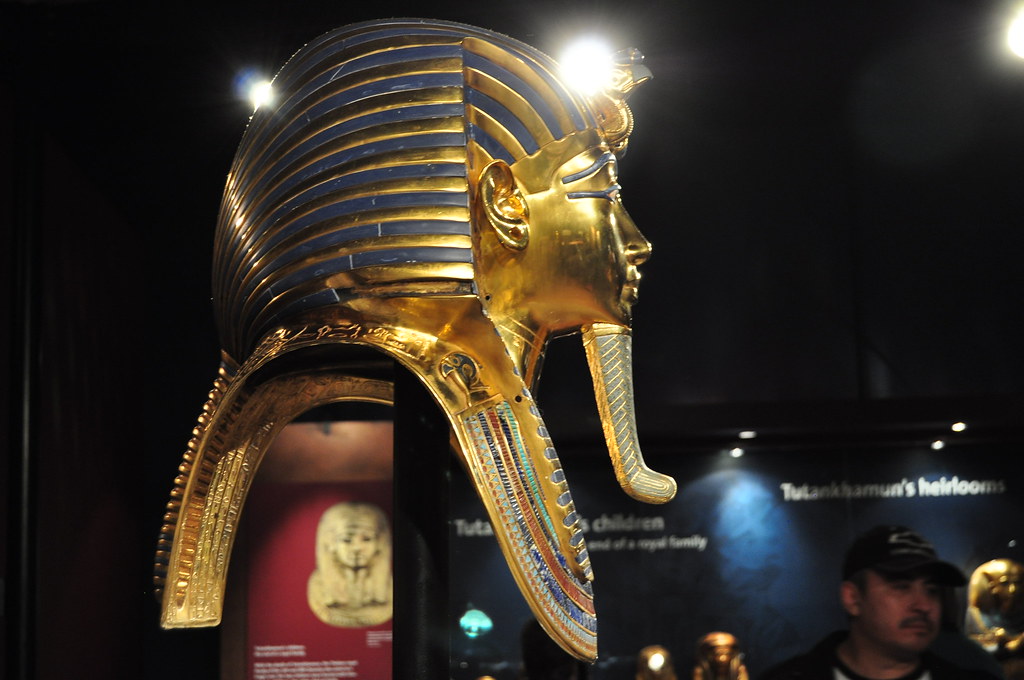 We often see the famous golden mask of Tut from a straight on front view. Here is a view from the right side. While this mask is a replica, the craftsmanship and attention to detail in reproducing the original is extraordinary. The sands of time are shifting. You have until the first week in September 2016 to see the full display and experience what it was like to discover King Tut and the unexpected burial chamber treasures.
Posted by 42N at 8:24 PM No comments: 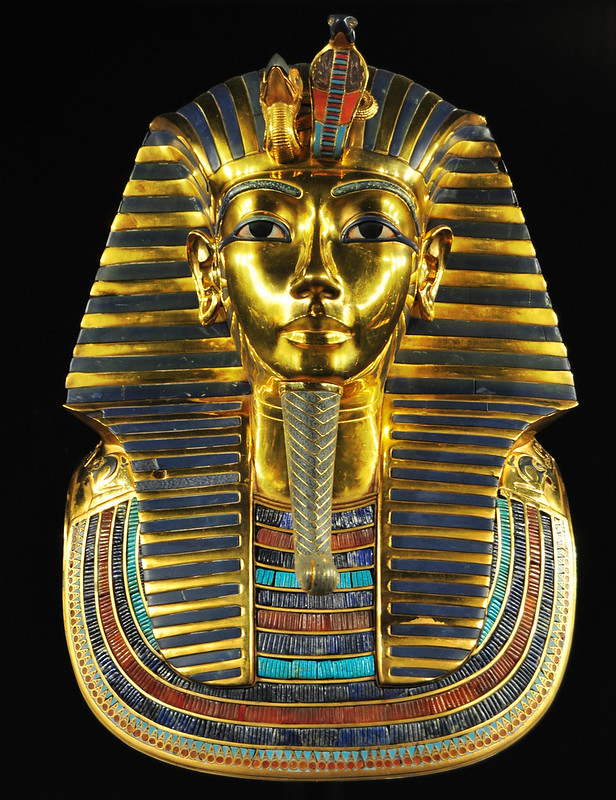 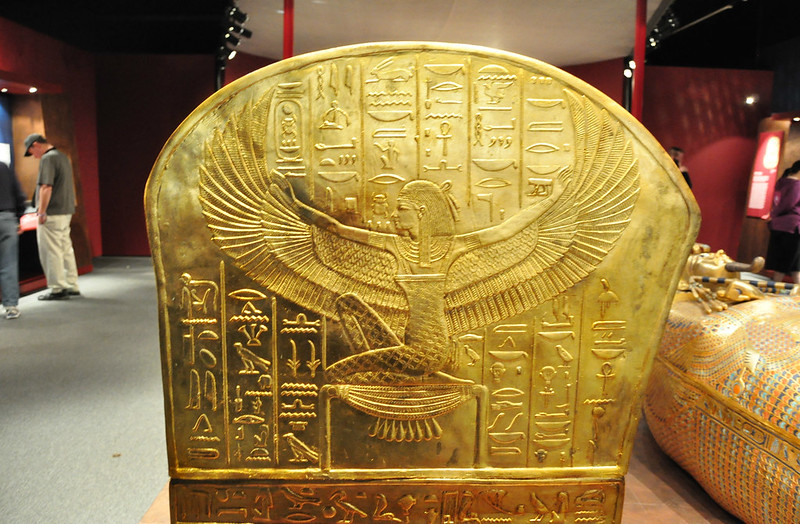 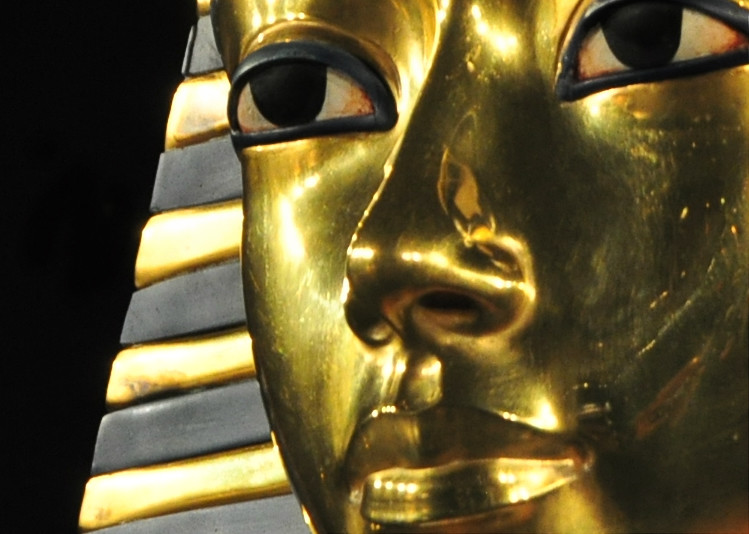 While it may be years before the original tomb items make the trip to Iowa, this was a great chance to see what is generally regarded as iconic, historical and artistic. More photos will be part of another posting soon.
Posted by 42N at 6:35 AM No comments: