Iowa Hawkeye Women Move to Sweet 16 Round at NCAA 2015 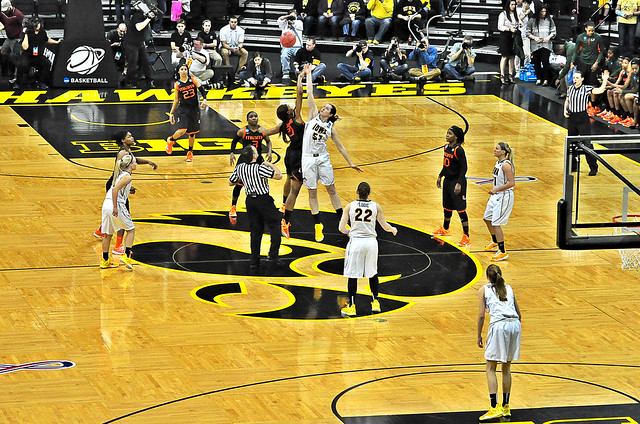 Just a few photos from this afternoon's NCAA's second round action from Iowa City. Host team Iowa played the Miami Hurricanes before 7,220 fans at Carver Hawkeye Arena. Iowa won after being up by 5 points at halftime.﻿
﻿ 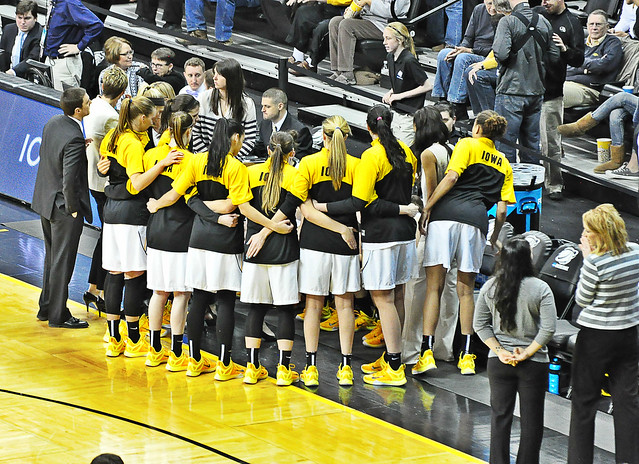 While the weather was good, the UI men's team didn't play until evening against Gonzaga, which meant there was opportunity for Hawk fans to come Iowa City and cheer on the team plus say goodbye to four senior players. The UI men lost to Gonzaga later in the evening. 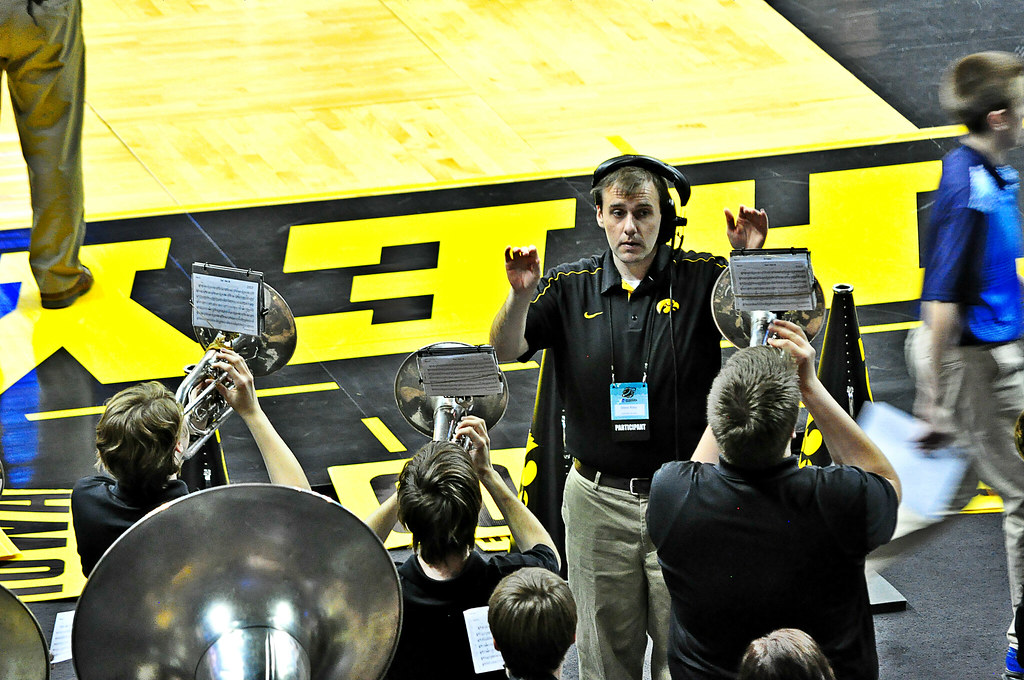 Each team was allowed to bring a pep band to the match. Iowa's band played some classic Iowa songs including the perennial Iowa win favorite, "In Heaven There Ain't No Beer." 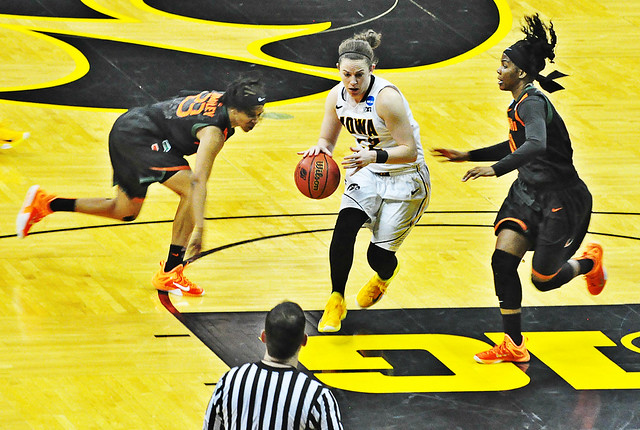 While the Hawkeyes are a team, senior guard Samantha Logic put on another tremendous balanced game. That's why she is a second team All-American as named by ESPN. Sam established many other records and received several honors this season. 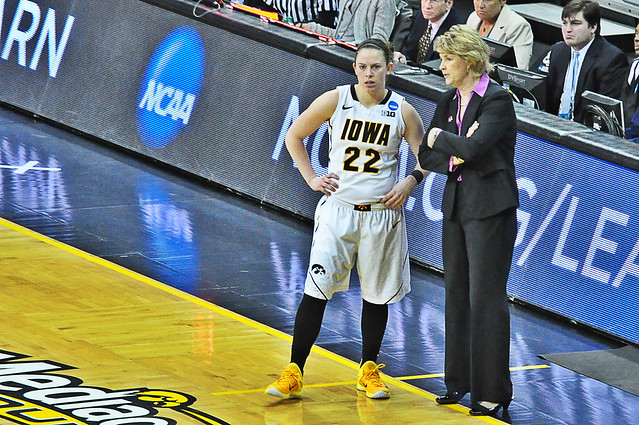 Since this was Sam's last home court game before continuing to Oklahoma City for the Sweet 16 round, I thought to focus a bit more on her than the other members. During a free throw, Sam listens to Coach Lisa Bluder. The win puts the Hawkeyes in the third round of the NCAA, the first time in the Lisa Bluder era of 15 years.
Posted by 42N at 8:55 PM No comments:

105 Years and Still Lighting the World 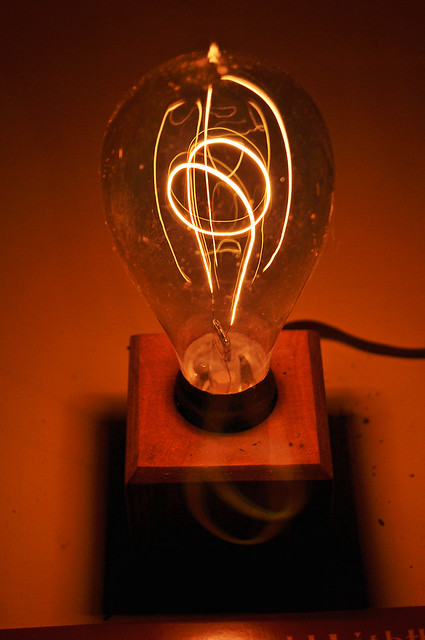 Some things last a long time. This light bulb still kicks out the rays despite being over a 105 years old. The bulb is located in the former Burlington, Iowa library which is now the Des Moines County Historical Society building. Electrical lighting was relatively new in 1898 when this building opened. A sign says this bulb was one of four found that were still in their sockets in the Grand Gallery balcony. Upon investigation these bulbs were determined to be made before 1910 because of their Thomson-Houston type bases and the tip of the glass drawn envelope. The glowing filament is also a flat tungsten ribbon instead of a coiled wire. According to bulbs.com the average life for incandescent bulbs is 750-2,000 hours. The Burlington based bulb has been burning on and off for 919,800 hours-so far. Shine on.
Posted by 42N at 8:34 PM No comments: 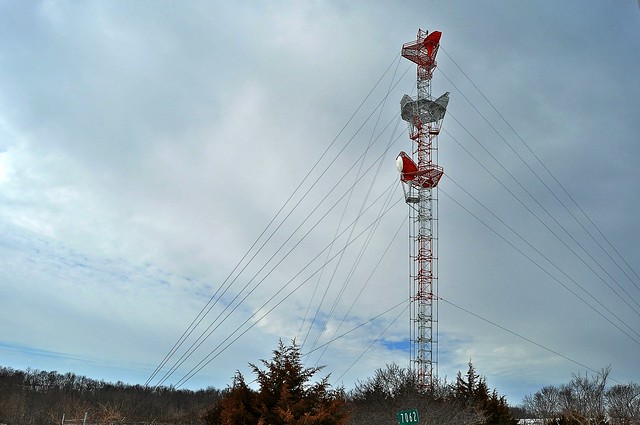 Hello? Can you hear me? Chances are that the cellular phone that you use to talk to your blogger buddies are supported by traditional land lines, cellular towers and microwave relay towers like this one in eastern Iowa. These towers are placed on hills and generally aimed at other towers located in line of sight. This particular tower is newer than most and placed in a partly wooded area by the Maquoketa Caves State Park. Hopefully the hibernating bats don't get mixed up signals as they take to the skies after their winter nap.
Posted by 42N at 11:25 PM 1 comment: 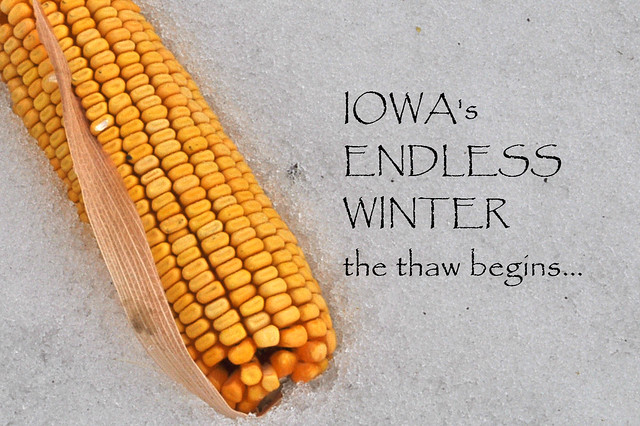 Today's temperatures soared into the upper 30s. Snow started melting a few days ago and is expected to disappear by the end of this week. No problems here. At the Hurstville Lime Kilns near Maquoketa I found this field corn that someone left for the area wildlife. Corn is an icon of Iowa. I thought the juxtaposition of colors made an interesting photo.
Posted by 42N at 6:40 PM No comments: