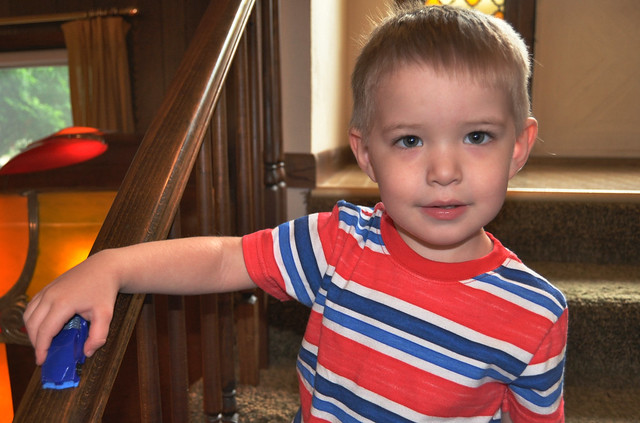 This is Oliver. He is camera shy. After meeting him on Saturday I asked if I could photograph him. He resisted and hid under draped tables. Later Oliver returned and played with his blue General Mills Hot Wheels car throughout the lunch hour. Seeing his attachment to the car I asked if I could take a photo of his favorite toy. Yes, the two year old replied. Snap.
Posted by 42N at 12:22 AM No comments: 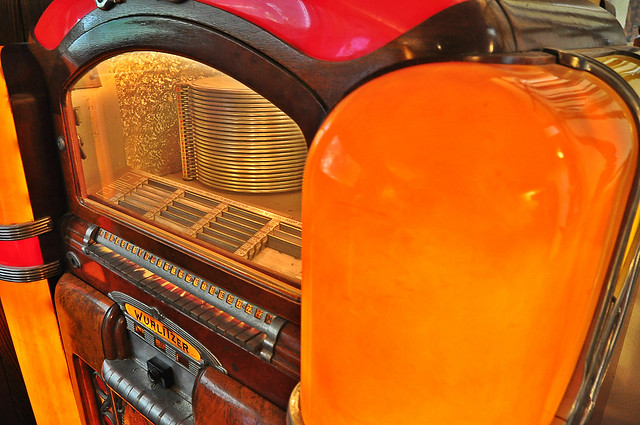 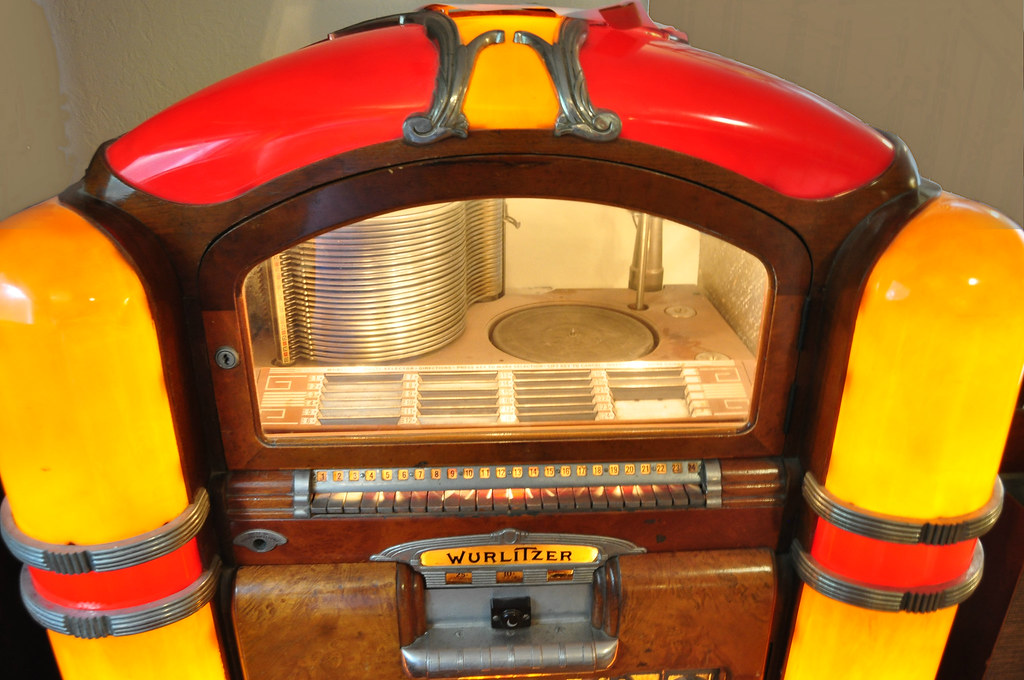 In Cedar Rapids the Killian's Department store (no longer here) bought this player new for its soda shop in the 1940s. The jukebox was later donated to a seniors center and remained there until 1960 when it was returned to the Killian's family. The present owner bought the Wurlitzer from the family in 1969. The colorful player has sat in the same finished basement location since the first moon landing. 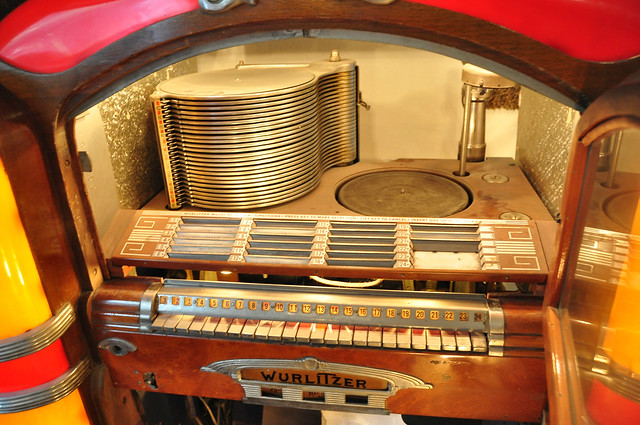 Silver colored holders flip out to the right with a single 78 rpm record as the turntable rises up from the base to play. 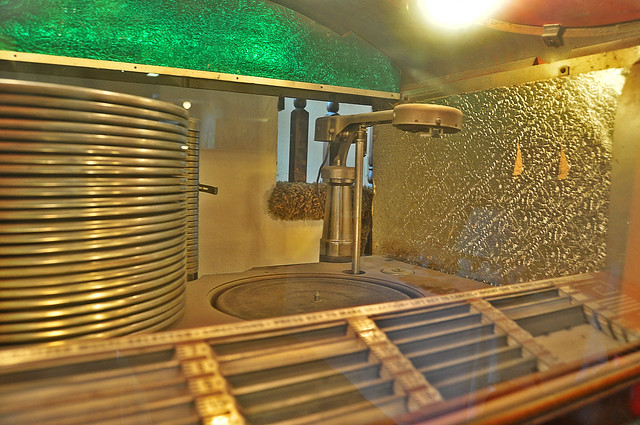 This unit's green back wall is missing and should be replaced. Some of the green foil-like backing is still in place. Handwritten song titles are located on the foreground slots. One song name that stands out is the Two O'Clock Jump. 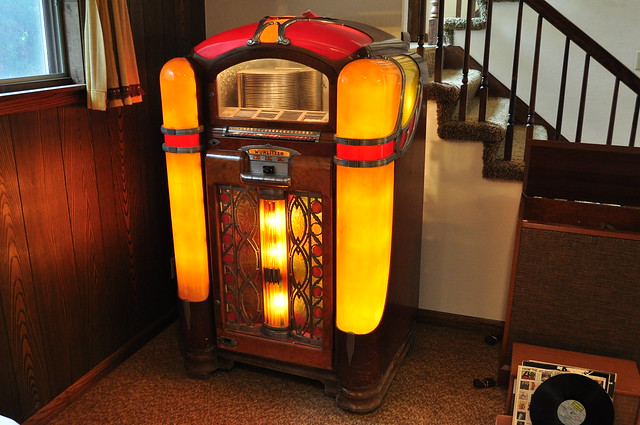 The coin box was removed and a push button was installed to let seniors play the music without placing a coin in the slot. Although two glass shades are missing from the corner columns which rotate inside the yellow-orange casing to give the illusion of a flame, the sealed center tubes heat up as designed to produce air bubbles that gurgle up the run of the tube. In all, the plastic is in fantastic shape, the unit lights up marvelously and hopefully, the sound system can be repaired to once again blare out music from decades past. See a photo of a restored player here.
Posted by 42N at 9:43 PM No comments:

Somber Look for a Union Soldier After Battle 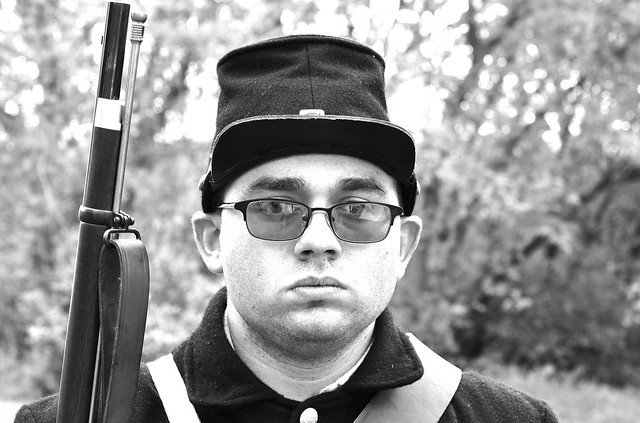 A Union soldier actor after a battle reenactment said he enjoys participating in these mock battles on weekends. The actors pay their own way, buy their own uniform and accessories and commit much time in the summer to traveling to reenactment battles. His next one is in the middle of July in northeast Iowa. On this day he was in Nashua, Iowa adjacent to the famous Little Brown Church in the Vale.
Posted by 42N at 10:33 PM No comments: 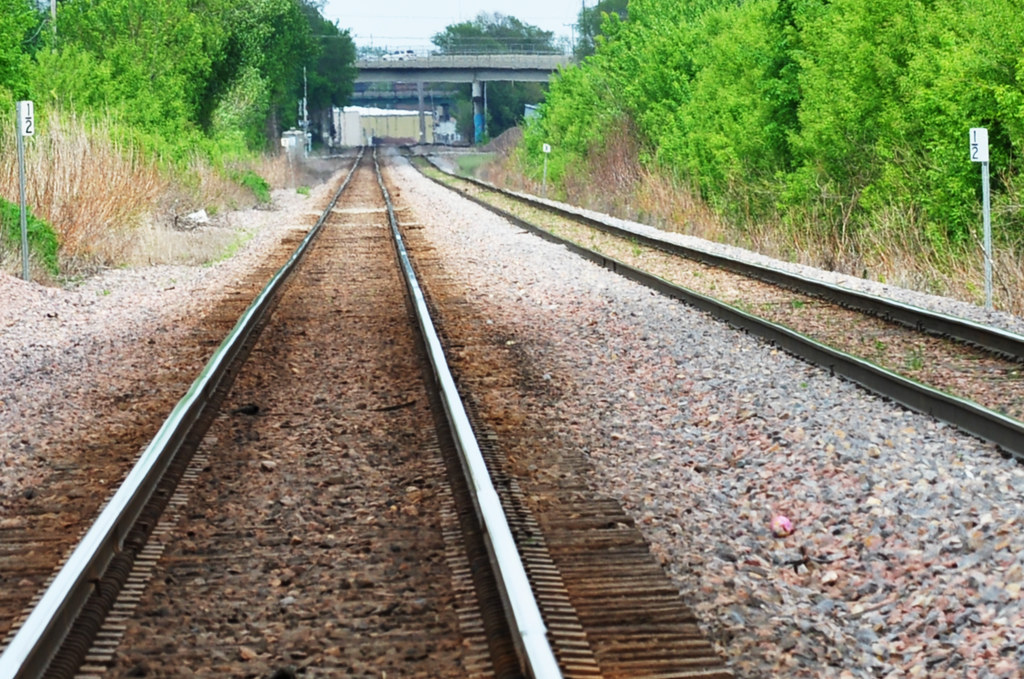 The main East - West lines for the Union Pacific railroad runs right through Iowa. Along these tracks have been many, many tons of coal, new automobiles and even the two 200 inch blanks for the Mount Palomar Hale telescope direct from the Corning Glass Works in Corning, New York. Yes, two blanks. The first one delivered developed a crack in the lens and needed to be replaced. It is or was on display at Corning's museum.
Posted by 42N at 1:30 AM No comments:

Iowa Forgets Not the Defenders of the Union 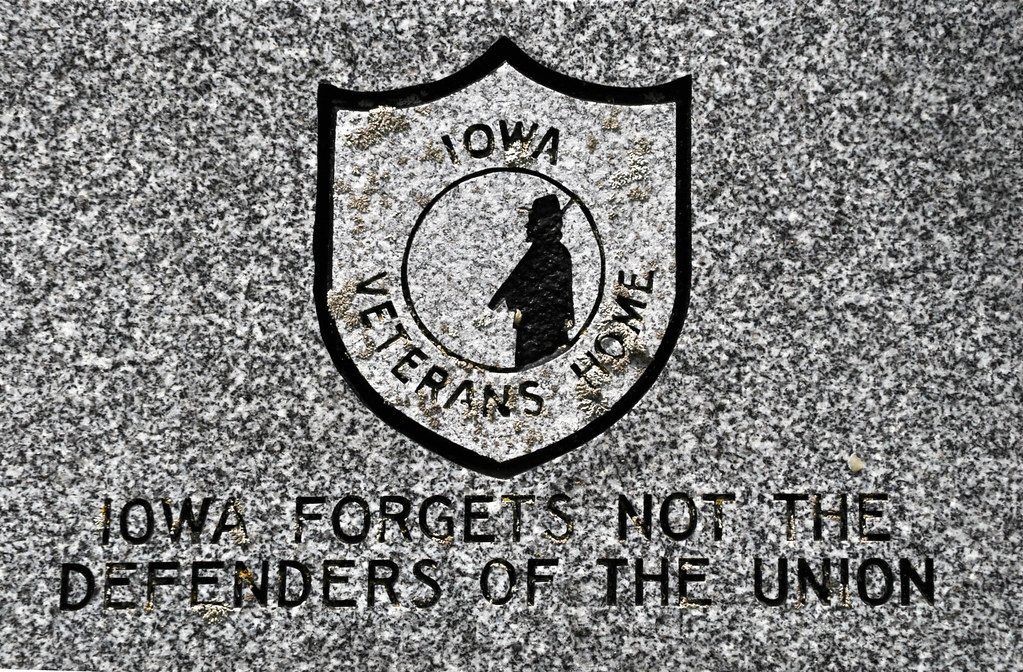 Two granite monuments at the Iowa Veterans Home in Marshalltown, Iowa. The facility was formerly the Iowa Soldier's Home. 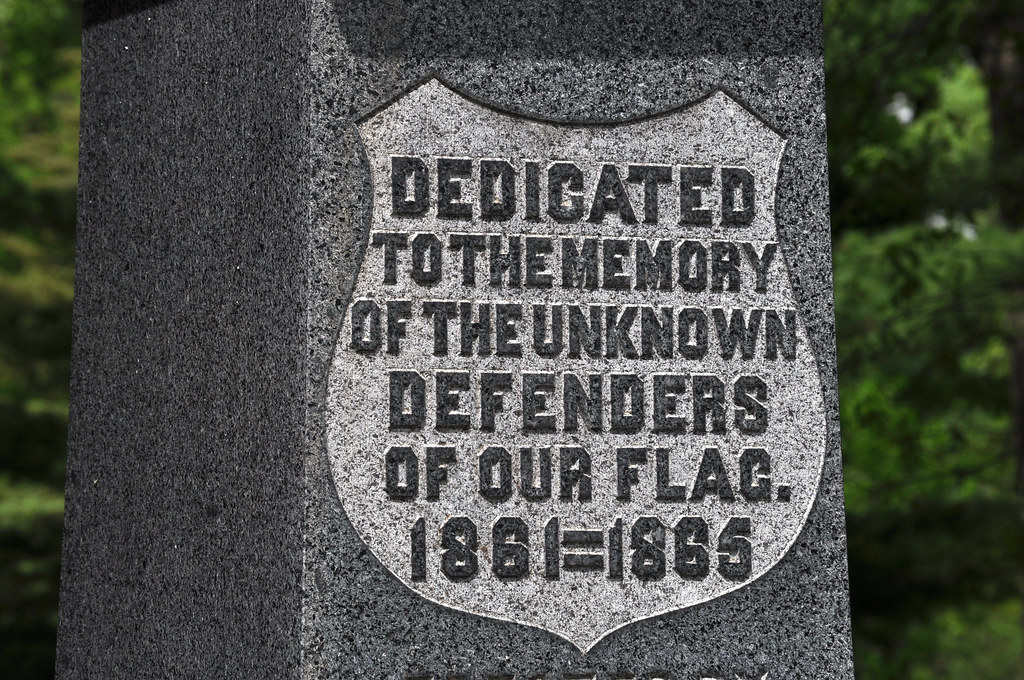 Dedicated to the Lives Affected by Vietnam 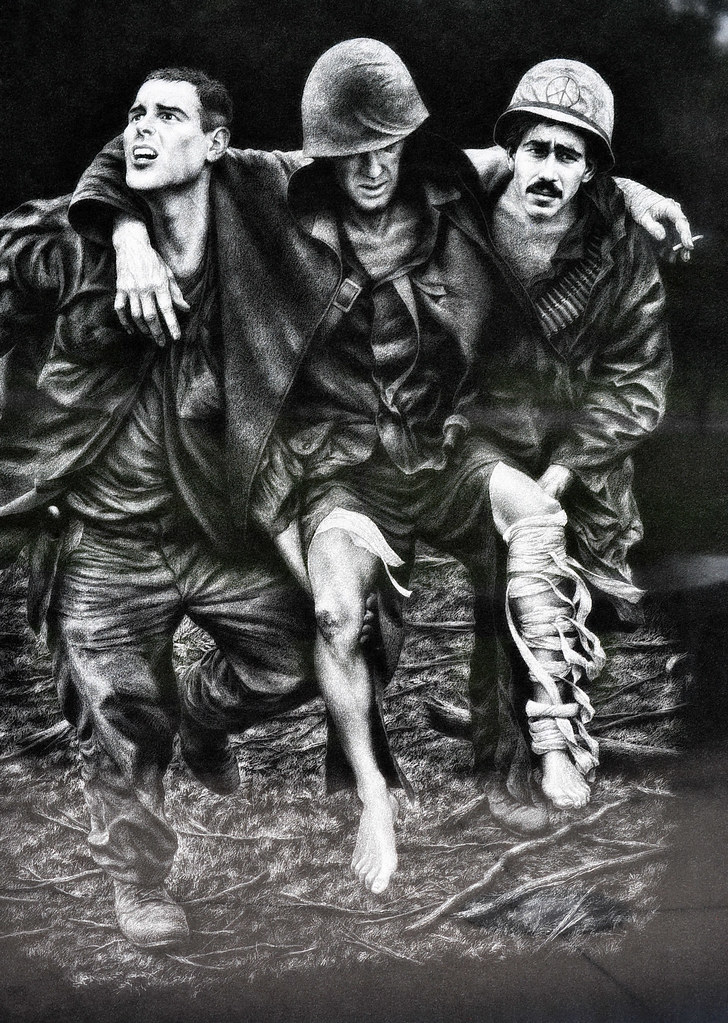 Just past the main gates to the Iowa Veterans Home in Marshalltown, Iowa and about halfway up the hill to the right is a granite display showing the names of the those service members who died during the Vietnam War. Of the two murals etched in polished black granite is this Vietnam combat evacuation scene. Grundy, Marshall, Tama and Harden counties (all central Iowa counties) from the Marshalltown area list their war dead on light colored granite aside this large laser drawing.
Marshalltown's Darwin Lee Judge (USMC) is listed at this memorial. He was one of the last US soldiers to die during that conflict. He died in a rocket attack on April 29, 1975. He was a 1974 graduate of Marshalltown High School. Lance Corporal Judge is buried at Rose Hill Cemetery in Marshalltown. All three television networks at the time came to Marshalltown to air the story and his memorial service conducted at the Marshalltown High School gym forty years ago last month.
Posted by 42N at 7:37 PM No comments:

Just Ahead of Memorial Day 2015 at the Iowa Veterans Home 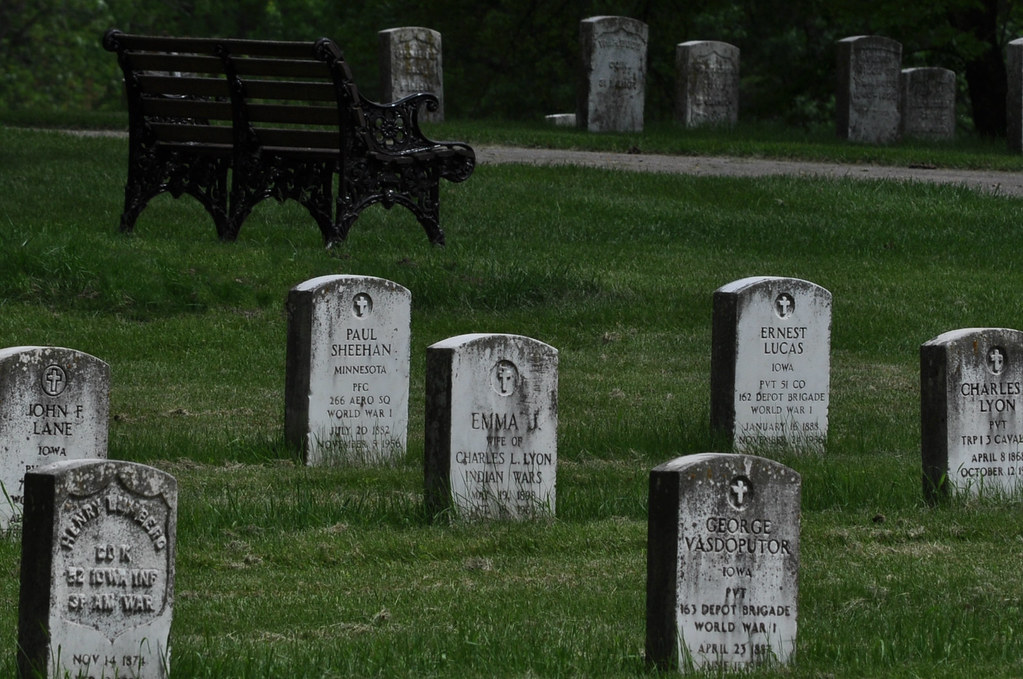 A recent visit to the Iowa Veterans Home in Marshalltown, Iowa provides a chance to see the gravesites of the men and women who have served this country through times of peace and at war. Whether they be from Iowa or elsewhere, their remains are buried at this cemetery in roughly chronological order. Some veteran's spouses are buried next to the service person rather than in time line fashion.

Just in this one image can you see the gravesites of veterans from the Indian Wars, Spanish American War, and World War I. I wonder what their life stories are all about? Other parts of the cemetery just yards away contain Civil War era veterans. Modern day veterans connected to Iowa are buried just over the hill from this location. As with many final resting places throughout the country the markers are decorated with small US flags for Memorial Day - in this case a week after I was there.
Posted by 42N at 6:37 PM No comments:

An Oldtime Windy Day in Ioway 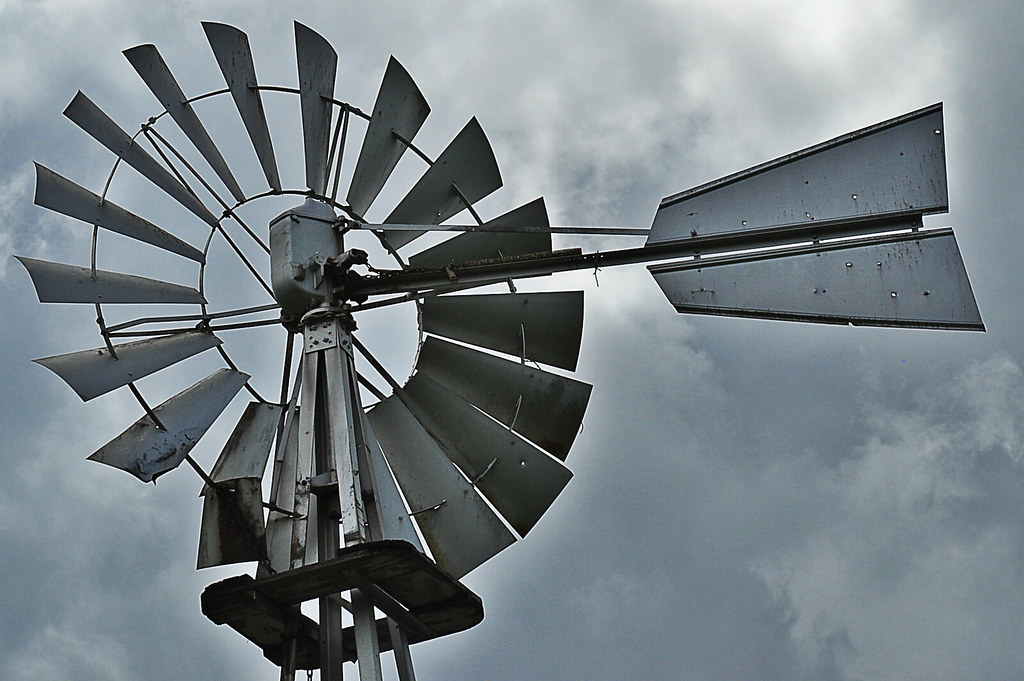 The windmill at the Old Bradford Pioneer Village in Nashua, Iowa responded to the nearly constant winds on Sunday. For extra credit count the number of bullet holes in the tail and blades. I've never seen an authentic farm windmill like this one without target practice evidence. How about you?
Posted by 42N at 1:00 AM No comments: 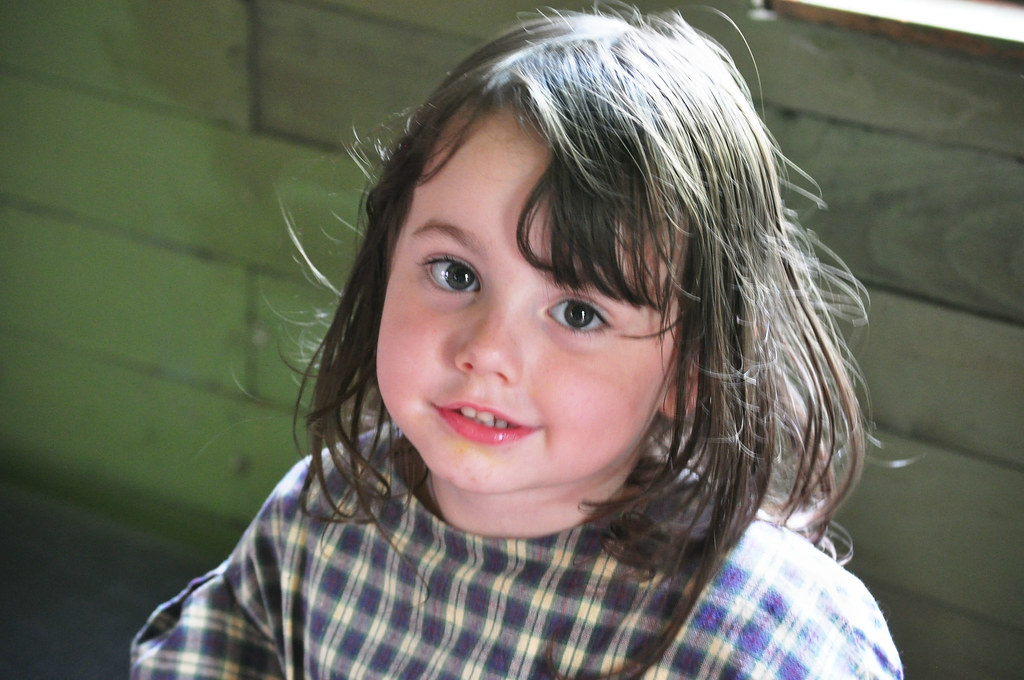 At the Old Bradford Pioneer Village near Nashua, Iowa surprises are abundant. Near the relocated train depot, an Illinois Central caboose is on display for anyone to visit. On this occasion a young Illinois resident climbed aboard the caboose to be a model for her mother's photography. 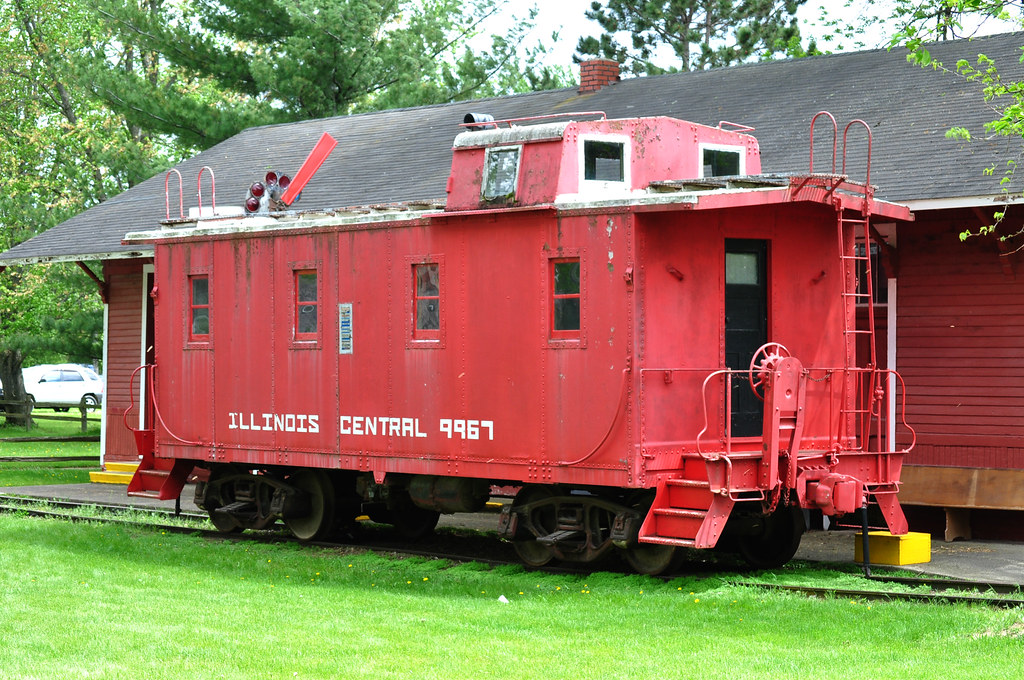 Illinois Central 9967 was donated to the Pioneer Village a number of years ago and is in general good condition despite needing a good exterior cleaning. 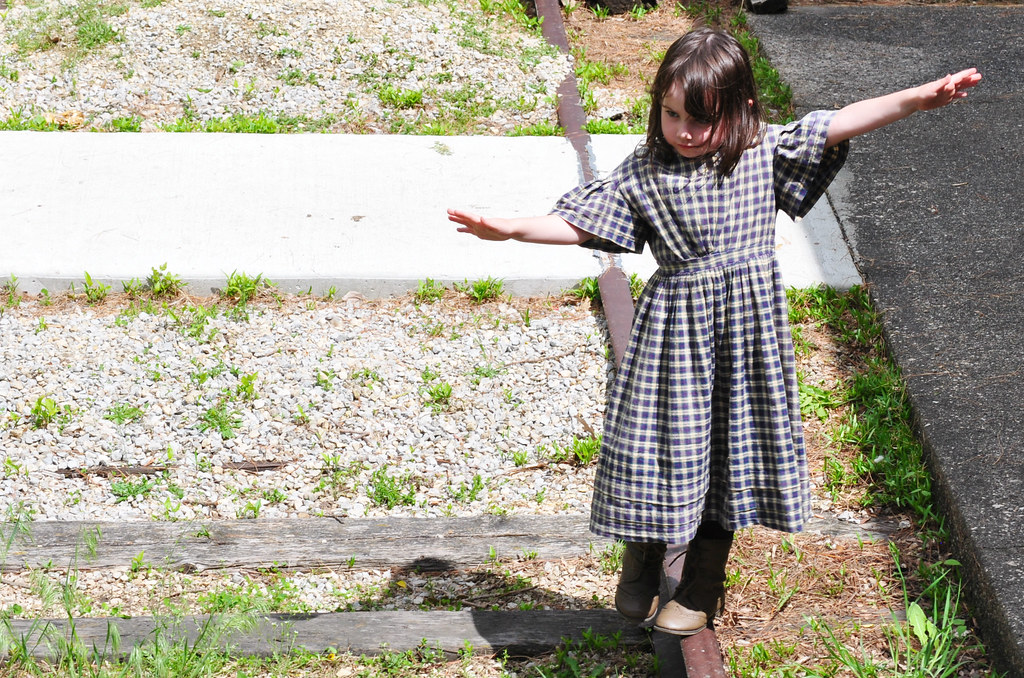 Dressed in Civil War era style clothing the girl played near the caboose while her father changed from his reenactment gear. 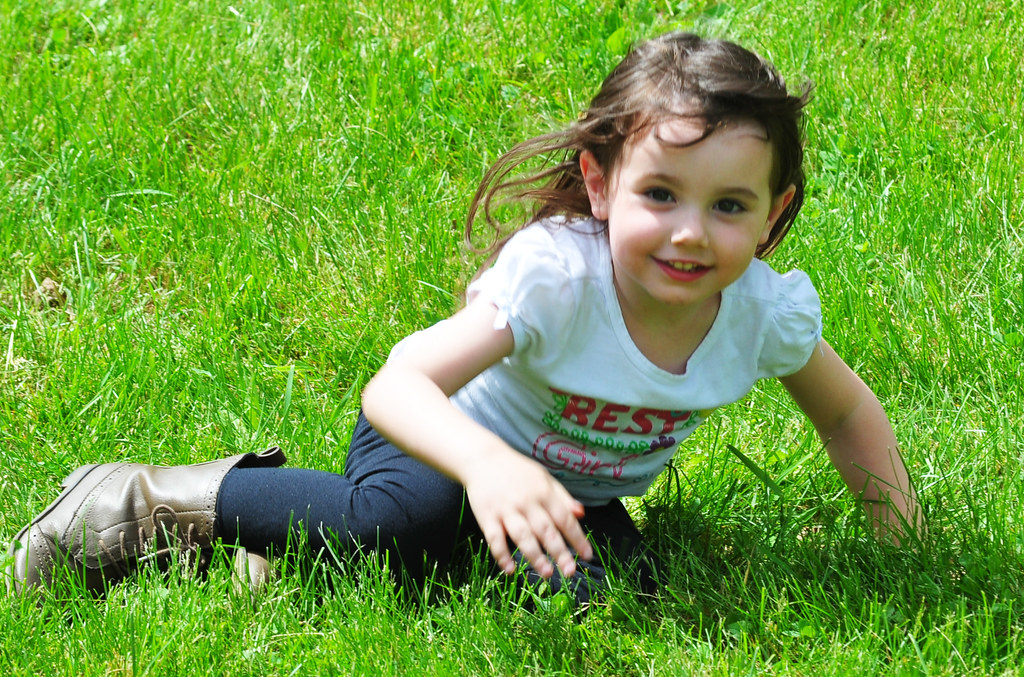 Before her three hour car ride back to the Quad Cities on Sunday afternoon, the caboose charmer showed off her endless somersault skills. Her display of tumble after tumble would most likely cause adults some discomfort.
Posted by 42N at 8:00 PM No comments:


President Lincoln's favorite song was "Dixie." At the 28th annual and final Civil War reenactment in Keokuk, Iowa on April 26, 2015, the president requested the song and clapped along. Abe Lincoln is actor Max Daniels of Wheaton, Illinois who has played the 16th president for several years and is well known in the Midwest. His website is here.

The band was made up of Union and Confederate players who proudly played the last song following the final reenactment of Civil War battles staged in Keokuk.
Posted by 42N at 9:17 PM No comments:

A Light Moment Before Battle 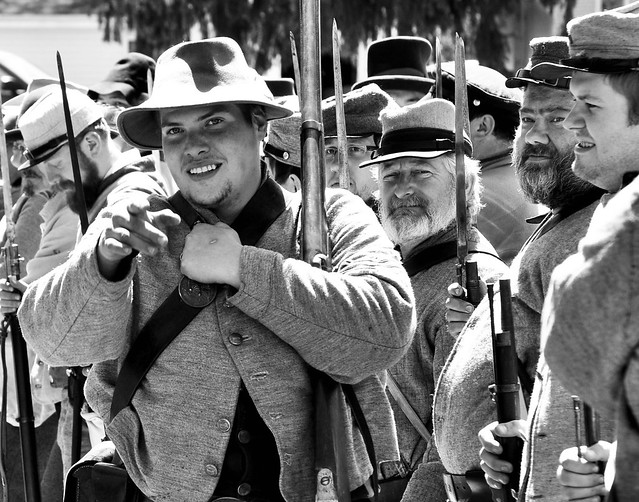 "Confederate" soldiers amass at Rand Park before the Battle of Appomattox in Keokuk, Iowa. These troops represented infantry elements from Kentucky and Tennessee for this reenactment battle - the 28th annual and final reenactment staged in Keokuk. Most of the players hailed from Cedar Rapids, Iowa.
Posted by 42N at 11:08 PM No comments: 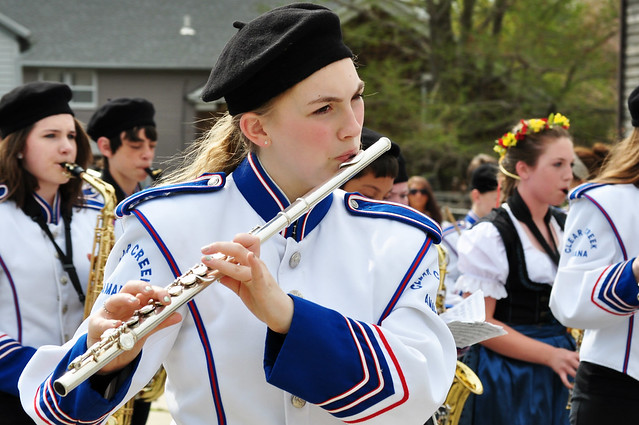 Maifest 2015 featured two marching bands last Saturday in Amana, Iowa, both hailing from the Clear Creek Amana school system. Several parade watchers remarked that the highlight of the 30 minute long spectacle is the marching band. This year the audience was twice amazed.
Posted by 42N at 10:57 PM No comments: 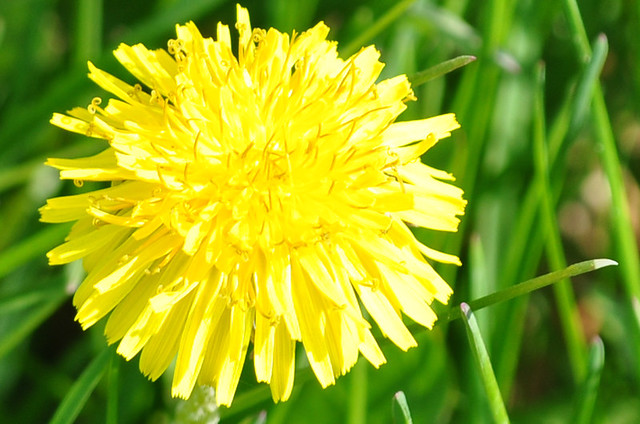 Two iconic flowers emerge in April and early May around these here latitudes - dandelions and tulips. Examples of the springtime color are from yesterday's stroll through Amana as the town celebrated Maifest. 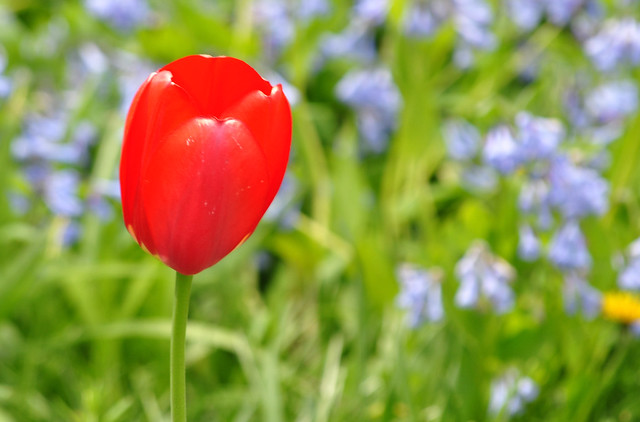 In the front yard garden of an older Amana home is a flower bed that has been in production for many years. This Spring the grasses and dandelions have started to overtake the colorful flower garden. 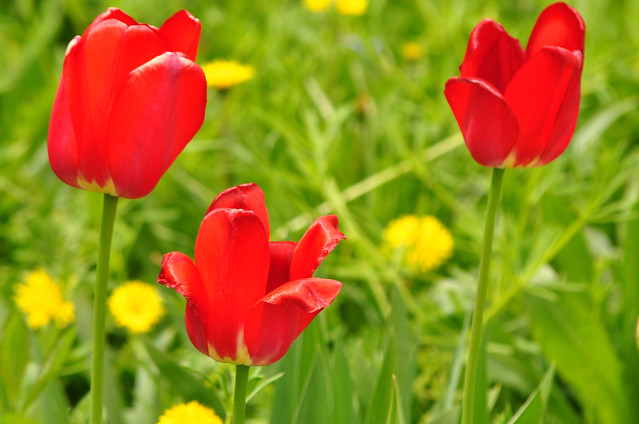 The mixture of high contrast colors from the tulips and dandelions not only make for a great photo but also signal warm weather has arrived and snow will be put off until November or December.
Posted by 42N at 3:00 PM No comments: