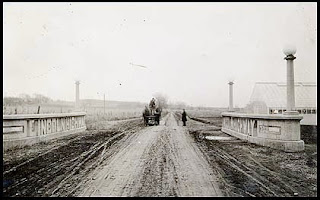 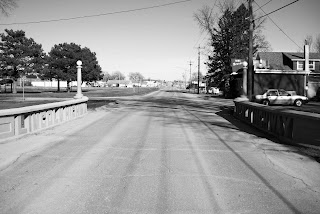 The Lincoln Highway bridge located in 42N country's Tama, Iowa (41.96N, 92.57W) is almost as old as the highway itself. The unique bridge with the words, LINCOLN HIGHWAY built in the side walls was constructed in 1915, just two years after the idea of the highway hatched. It is believed to be the oldest surviving bridge along the original highway.
Above is a photo believed to be from 1915. Looking east over the bridge is the mud filled highway featuring a horse drawn wagon. The bottom photo was taken 95 years later on March 21, 2010 looking in the same direction. Note how much construction is located along the highway.
In 2010 the Highway 30 (Lincoln Highway) Tama by-pass project is under construction to the left of these photos. The new speedway skirts around this area and will greatly reduce the traffic near the bridge. Once completed travellers on the new Highway 30 will not readily see the bridge or the King Tower Cafe without making a special side journey. The restaurant opened in 1937 as a one-stop filling station, garage, wrecker service, café, and featured 18 cabins. It is located along the original Lincoln Highway just about a half mile east from this bridge (on the left.)Join the 3rd Annual Iowa Lincoln Highway Motor Tour across Iowa from August 26-29, 2010 with a stop in Tama. For more information contact Jeff LaFollette at 563-349-3047 or email at jefflaf@peoplepc.com. Know that.
Posted by 42N at 8:33 PM